Every single quilter who helped us turn "sweat equity" into dollars for research by making quilts #1 to #9,999 helped us reach this moment. We thank every single one of them.
When Ami Sims started the AAQI she never would have believed we could have achieved so much. She has held every single quilt given to the AAQI in her hands and felt the hope in each stitch that somehow we could make a difference. The cure still eludes us, but together we have found a powerful voice for change.
Thank you for adding volume to that voice as you tell even more people about our efforts!
Posted by Melody Crust at 4:27 AM 1 comment:

Forty-eight APNQ members from all over the region were invited to create, in fabric, their interpretation of Living Colour. Artistic expressions and construction techniques of unlimited variety were used for this theme of "Living Colour". Their creations became APWQ's seventh invitational traveling exhibit, which made its debut at Quiltfest 2008.
These quilts will be available to purchase at our online auctions coming up May 10-22 and June 8-22. Preview for Auction A is available now at Benefit Bidding.

I am passionate about quilting. My quilting is continually evolving and changing as I am learning and growing through exploring the endless possibilities quilting offers. I am not yet the quilter I want to be, but the journey is wonderful.

This quilt expresses some of the feelings and emotions I experience when working with colours and textures to create quilt art.

Artist Statement
My goal for this challenge was for the color of the quilt to reach out and grab the viewers, then pull them in for a closer look.

Posted by Melody Crust at 4:21 AM No comments:

I love to paint my quilts. It does take some experimentation. My favorite paint are oil paint sticks. Here are two small quilts, exactly the same paint, but what a difference the background makes. 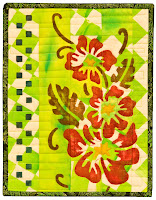 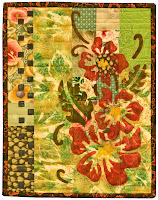 Posted by Melody Crust at 1:08 PM No comments: 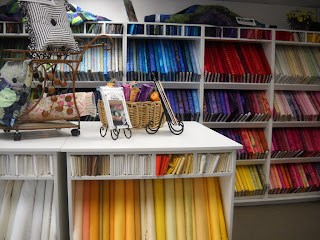 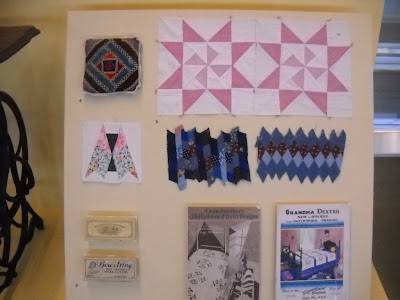 Threading the Needle: Sewing in the Machine Age traces the development of the domestic sewing machine from the 1850s to the 1970s and celebrates over one hundred years of sewing. Pattern illustrations featured in the exhibition highlight ladies homemade fashions throughout the decades. A variety of notions from sewing boxes and sewing birds to needle cases, chatelaines, and pincushions, are also on display. 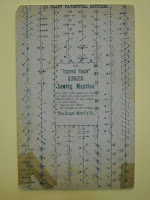 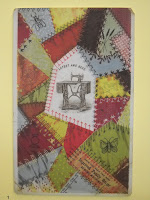 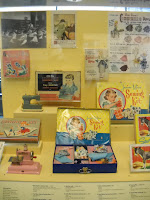 Posted by Melody Crust at 2:11 AM No comments:

Had the opportunity to spend WAY to much time in the San Francisco Airport. But they were nice enough to have the art something I could really relate too:

Threading the Needle: Sewing in the Machine Age

For approximately 20,000 years, hand sewing with needles and thread made from various materials remained unchanged. When the sewing machine was first introduced to American homes in the 1850s, it was heralded as a laborsaving device that would transform the domestic lives of women everywhere. Sewing clothing and household linens, once a time consuming, never ending task, no longer had to be painstakingly completed by hand. The popular and influential Godey's Lady's Book soon coined the sewing machine "the queen of inventions" and declared that every family in the United States should own one.

Long before 1850, many inventors attempted to fabricate mechanical sewing devices. In 1790, 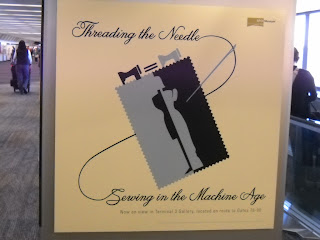 the British inventor Thomas Saint patented a machine for sewing leather, though it was never manufactured. Forty years later in France, tailor Barthelemy Thimonnier (1793–1857) patented a sewing machine. When a clothing firm established a manufactory with eighty of his machines to sew uniforms for the French army, a mob of angry tailors who viewed the new invention as a threat to their livelihood destroyed them all.

New Yorker Walter Hunt (1796–1860), the inventor of the safety pin, developed an innovative sewing machine in 1834. It had an eye-pointed needle that used two spools of thread (one from above and one from below) to form a lockstitch. But Hunt neglected to patent his machine, and it was never manufactured due to production costs and pressure from many who f 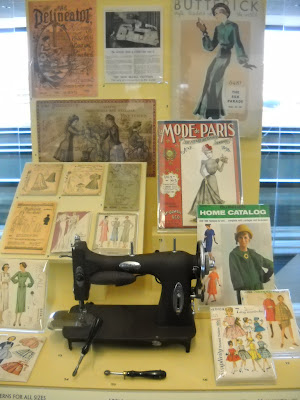 elt the device would undermine the work of hand sewers. Unknowingly, Elias Howe (1819–67) of Massachusetts patented a similar sewing machine in 1846. Unsuccessful in marketing the device in America, Howe tried his luck in England. He returned penniless to find that many companies were not only selling sewing machines, but also infringing on parts of his 1846 patent. Howe successfully sued many of these manufacturers for royalties, including Isaac M. Singer (1811–75). He initially received five dollars for each machine sold in the United States and one dollar for each machine exported. Howe eventually collected over two million dollars before his patent expired in 1867.

Several other American inventors made important technical contributions to the development of the early sewing machine, but it was Isaac M. Singer patented the first truly, commercially successful sewing machine in 1851. His machine offered convenient features such as a foot treadle, which replaced the cumbersome hand crank to power the needle. Many more technological advances emerged during the Industrial Revolution that eased household sewing. For instance, power looms enabled retailers to offer vast quantities of fabrics by the yard, and easy-to-fit, mass-produced tissue paper patterns became available in standardized sizes. 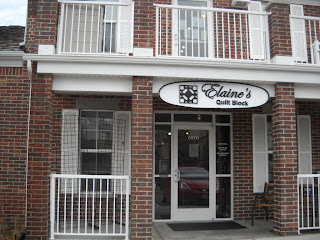 They have a great selection quilting fabrics available for all of your quilting needs including homespun and flannel, civil war prints, batiks, 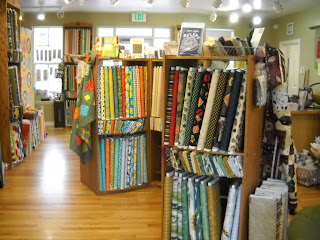 and a broad selection of modern fabrics.
Posted by Melody Crust at 2:24 AM No comments:

This package contains 15 different circle sizes, 4 of each size, ranging from 7/16" to 2" for a total of 60 circles. Following the directions included in this package you can make perfect circles for your hand and machine applique.

There are ten different sizes ranging from 2-1/4” to 4-1/2” and they are made from heat resistant plastic so you can use them with an iron. These bigger sizes are great for the center of a Mariner’s Compass block, Drunkard’s Patch blocks, traditional appliqué and so much more.
This package contains 15 different circle sizes, 4 of each size, ranging from 7/16" to 2" for a total of 60 circles. Following the directions included in this package you can make perfect circles for your hand and machine applique.
Posted by Melody Crust at 5:02 AM No comments: