What would a visit to NYC be without museums? I went to MOMA because of the Toulouse-Lautrec: Prints and Posters Exhibition. WOW! Says it all.

A preeminent artist of Belle Époque Paris, Henri de Toulouse-Lautrec (1864–1901) brought the language of the late-19th-century avant-garde to a broad public through his famous posters, prints, and illustrations for journals and magazines. A cultural nexus, he connected artists, performers, authors, intellectuals, and society figures of his day, creating a bridge between the brothels and society salons of the moment. His work allows entry into many facets of Parisian life, from politics to visual culture and the rise of popular entertainment in the form of cabarets and café-concerts.

Some of my favorites: 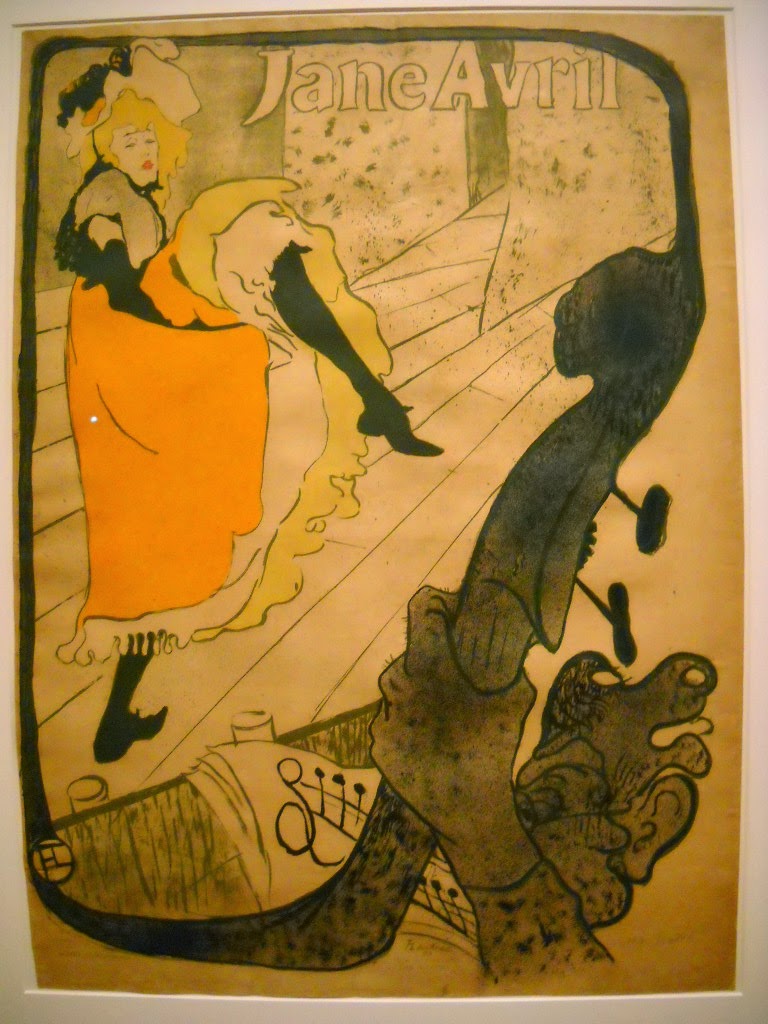 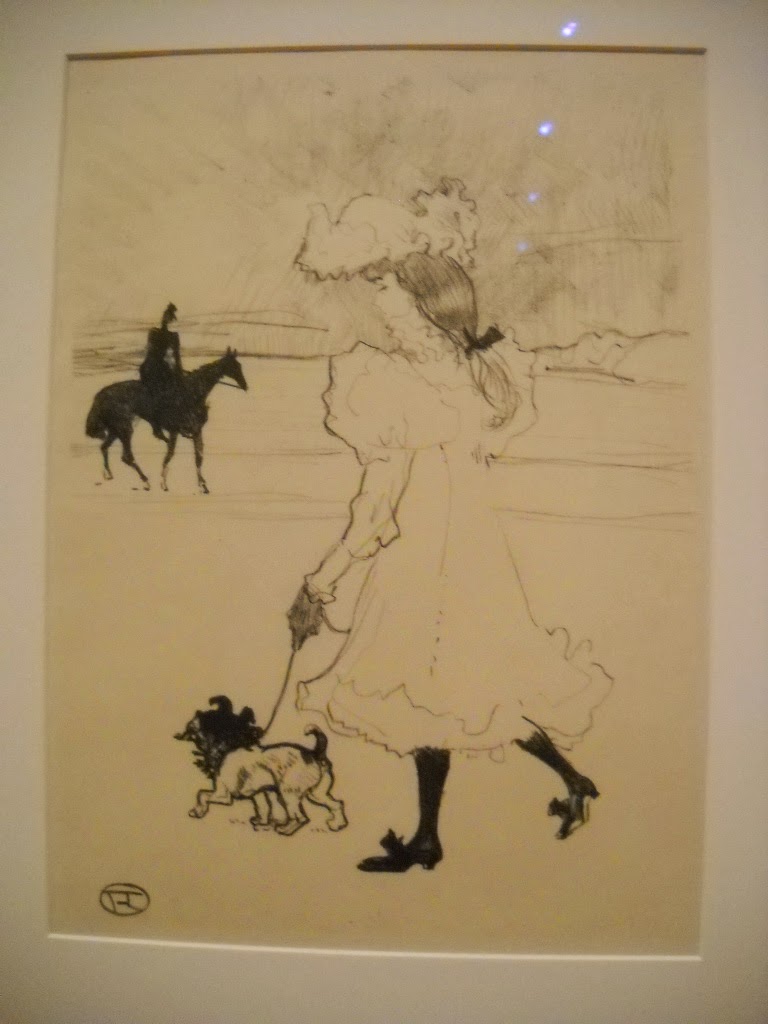 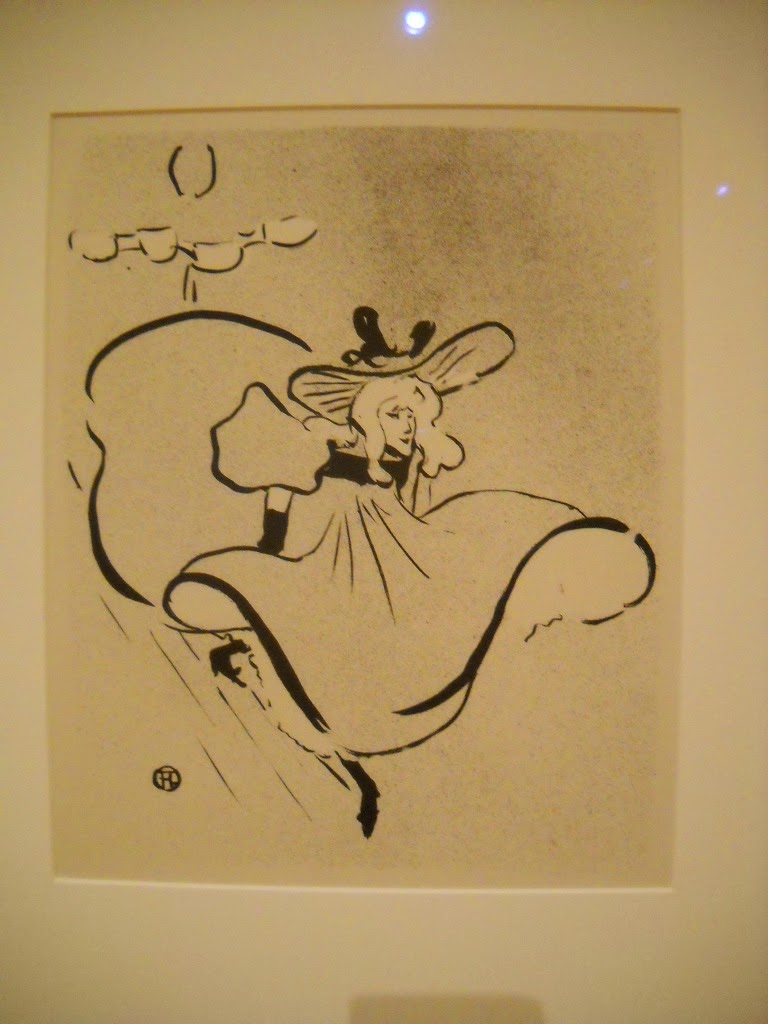 Posted by Melody Crust at 8:00 PM No comments:

Weekends in the City

Weekends in NYC are a lot like weekends every where. Sunday morning I got myself up in time to go to the GreenFlee. I assumed that this would be a flee market (lots of other people's junk). Much to my surprise, it appeared to be a farmers market. Not what I was looking for at all. 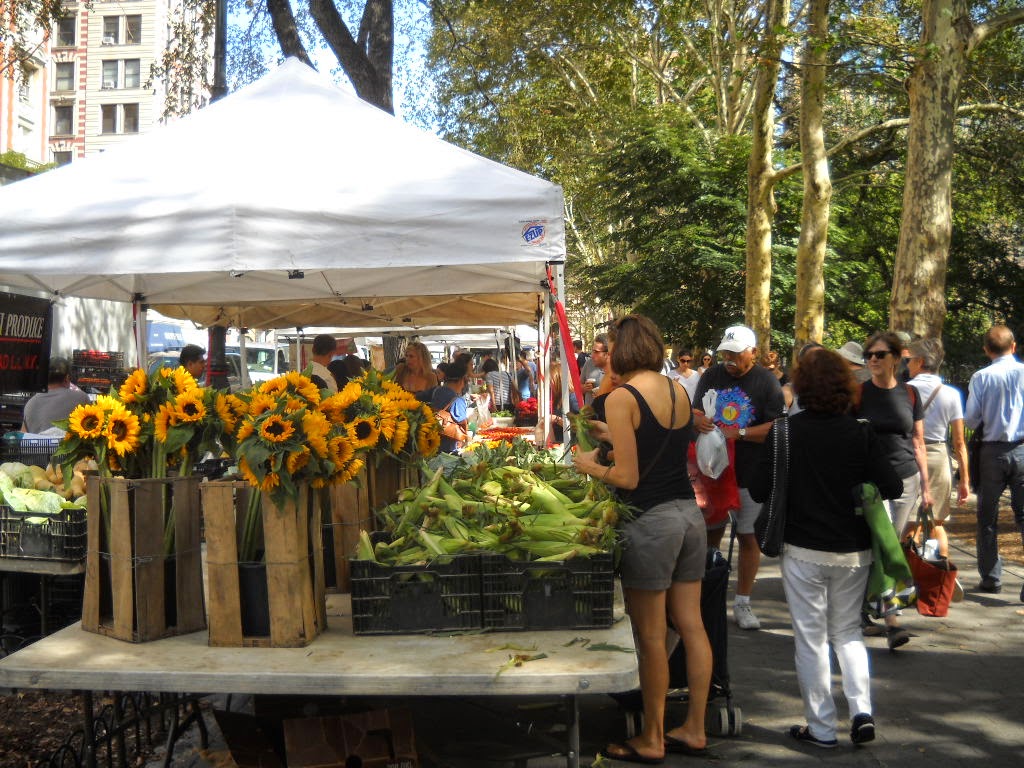 A look across the street proved me wrong. There it was, just what I was looking for...junk! My collection of vintage jewelry needs a new addition.

After a great boat ride, I decided to do something indoors. What a better way than to spend the afternoon at a quilt shop? So I headed for The City Quilter.

On my way there I decided to duck into a hole in the wall for lunch. The Dominican equivalent to really, really good fast food. 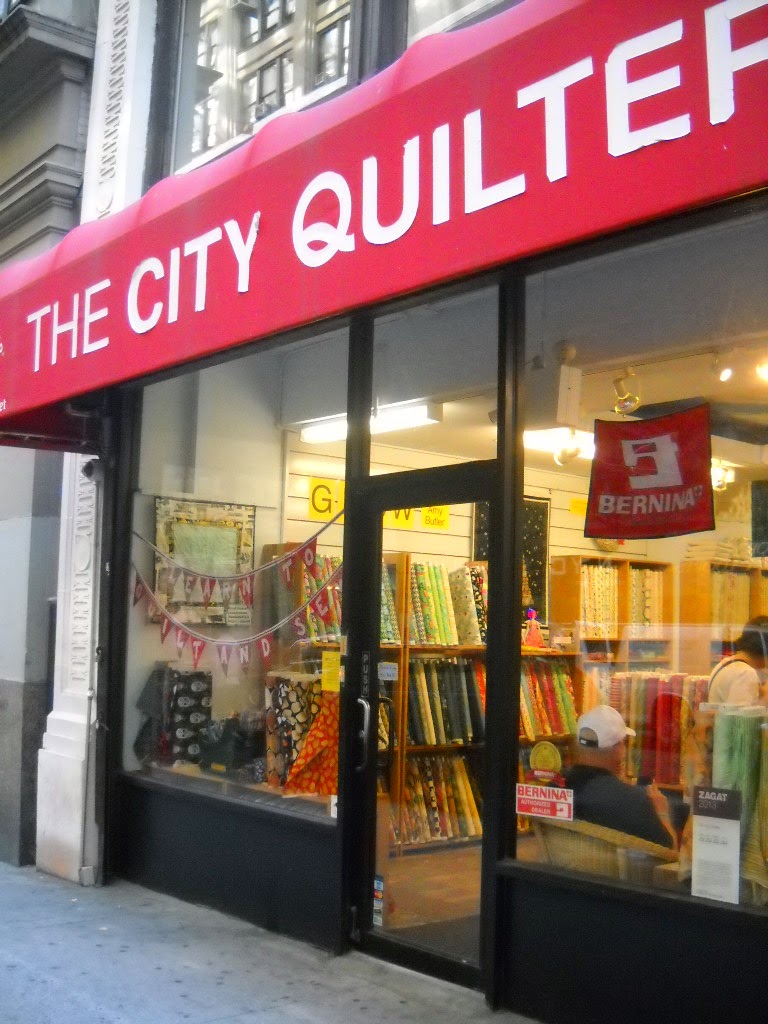 About the quilt shop, a quilting haven in New York City, they specializes in fabric for the urban quilter and sewer — sophisticated, contemporary, exotic — including an extensive collection of batiks and hand-dyed fabric 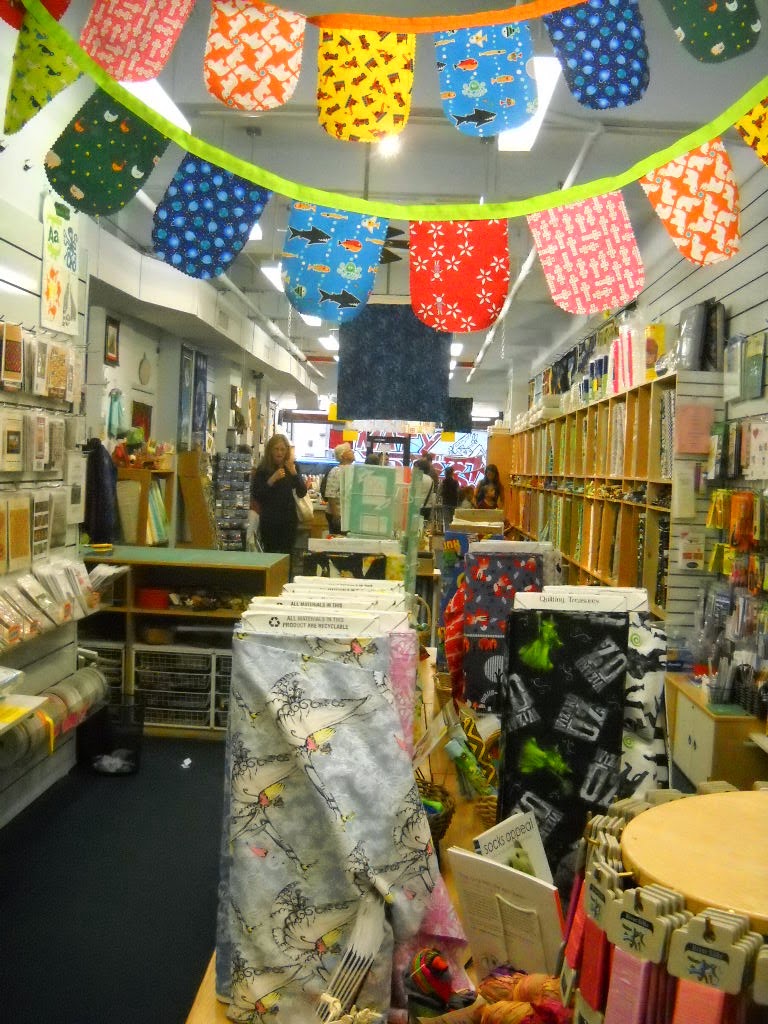 The also have the only art quilt gallery in the city. As it turned out the Velda Newman’s SCALE + COLOR + VISION exhibition was there. All I can say is TERRIFIC! Zinnia was so large that I couldn't get it into the frame of my camera! 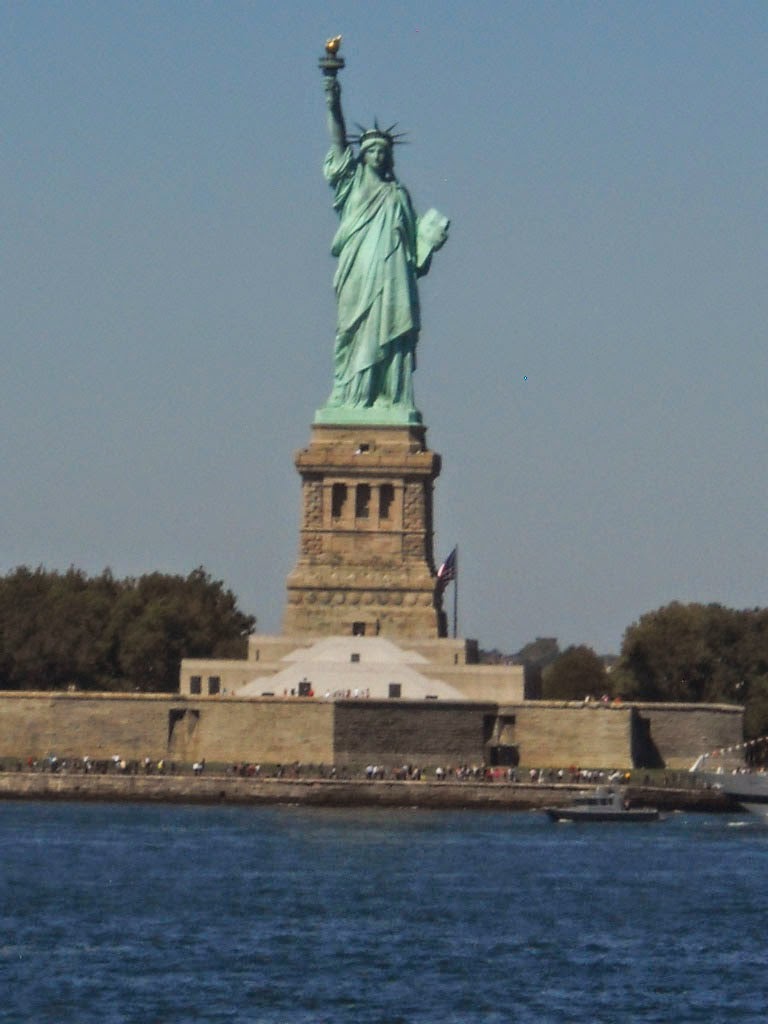 My first day here and the weather is perfect! I'm not very interested in touring the Statue of Liberty, but it is such a pretty day, I'm taking the Staten Island Ferry instead. (I found out later that today is a free day at all National Parks).

The Statue of Liberty is a colossal neoclassical sculpture on Liberty Island in the middle of New York Harbor. Designed by Frédéric Auguste Bartholdi and dedicated on October 28, 1886, was a gift to the United States from the people of France. 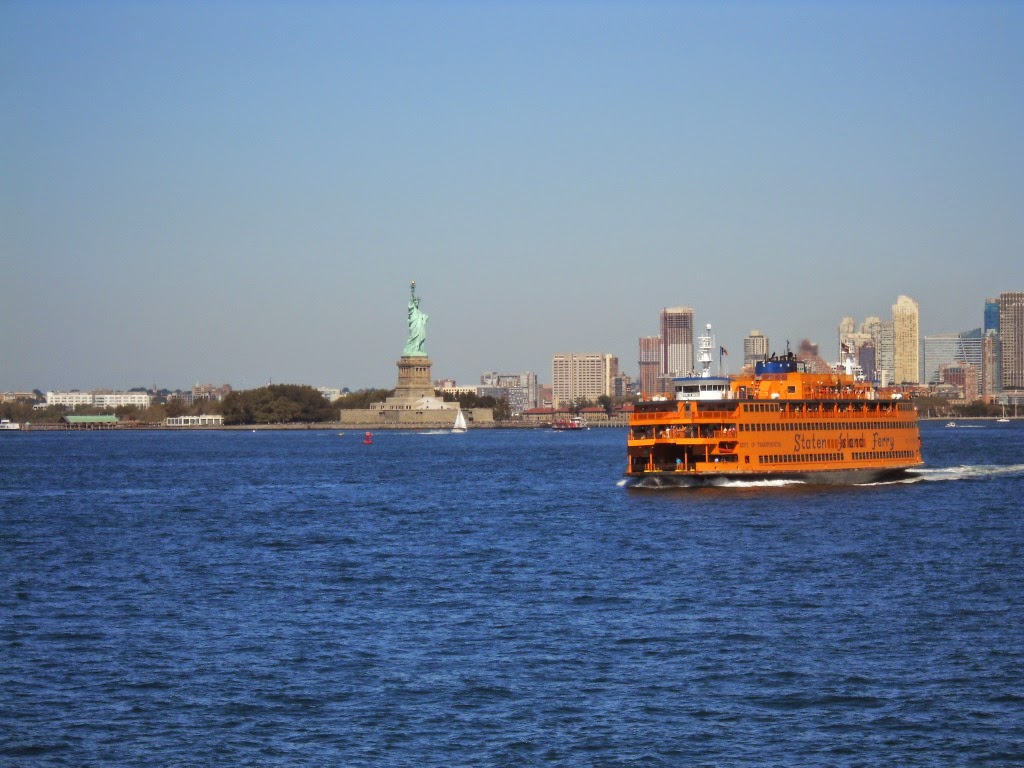 By accident I got seated in a window seat. My very first view of the city from the air. As it turns out I should have taken a cab from Newark to the apartment I'm renting. Public transportation from Newark to Manhattan is awful! 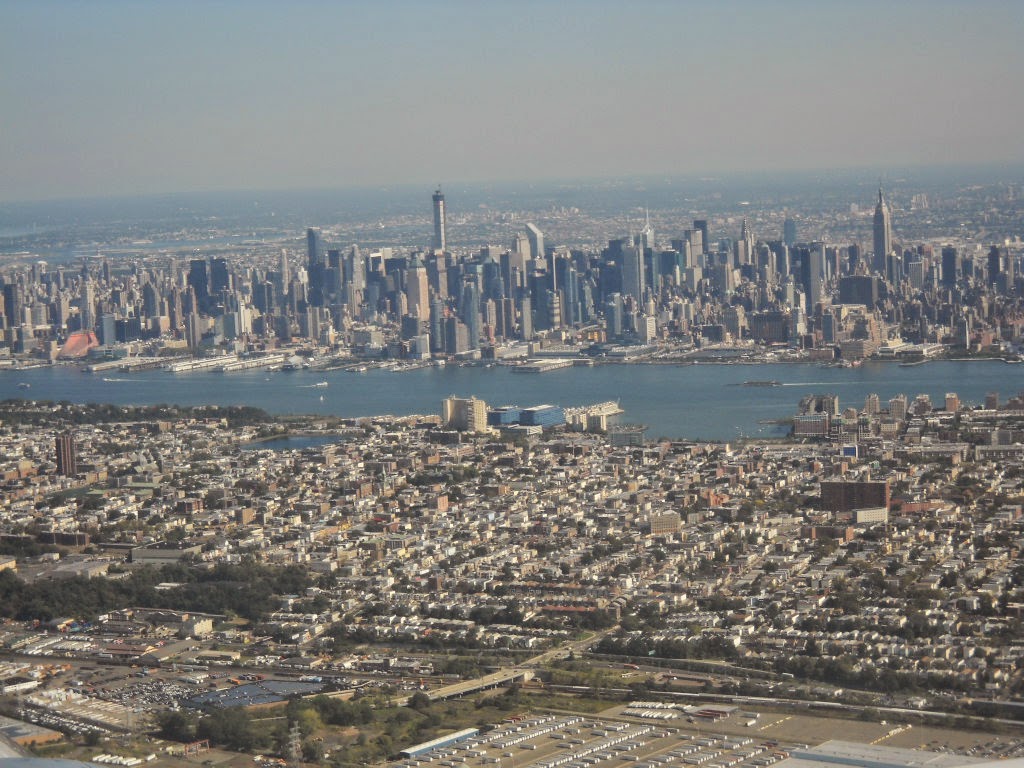 Posted by Melody Crust at 3:15 PM No comments: 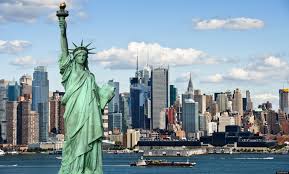 New York is the most populous city in the United States and the center of the New York metropolitan area. The city is referred to as New York City or the City of New York to distinguish it from the State of New York, of which it is a part. A global power city, New York exerts a significant impact upon commerce, finance, media, art, fashion, research, technology, education, and entertainment. The home of the United Nations Headquarters, New York is an important center for international diplomacy and has been described as the cultural and financial capital of the world.

On one of the world's largest natural harbors,New York City consists of five boroughs, each of which is a county of New York State. The five boroughs—the Bronx, Brooklyn, Manhattan, Queens, and Staten Island—were consolidated into a single city in 1898. With a census-estimated 2013 population of 8,405,837distributed over a land area of just 305 square miles, New York is the most densely populated major city in the United States. As many as 800 languages are spoken in New York, making it

Many districts and landmarks in New York City have become well known to the city's approximately 55 million annual visitors. Several sources have ranked New York the most photographed city in the world. Times Square, iconified as "The Crossroads of the World", is the brightly illuminated hub of the Broadway Theater District, one of the world's busiest pedestrian intersections, and a major center of the world's entertainment industry.

I'm going to see it all...sometime.
Posted by Melody Crust at 6:00 AM No comments: 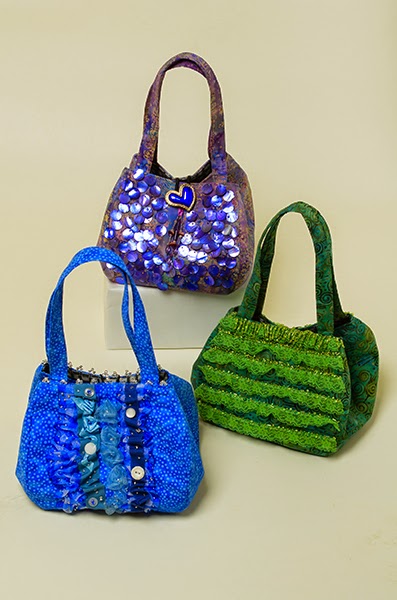 Fun & Fancy -Make a Purse
Create stunning purses that can be finished in practically no time. Make your own in class, embellish it with trims, ribbons, buttons, bows, lace, fabric, found objects and then dive into the wonderful world of beads. We will learn what beads to buy, how to sew them and how to make your own lavish beaded dangles and fringes.

It's not too late to sign up for classes at the International Quilt Festival in Houston. Classes do fill quickly, but sign-up to get on the waiting list. Chances are good you will get what you want!

I will be teaching 9 classes during the week and giving a lecture. They range from Fun and Fancy – Make a Purse to Stitching Through the Layers; Straight Line Quilting Design and include the NEW lecture - So Many Ideas-Sew Little Time.

Here is the link to the catalog: 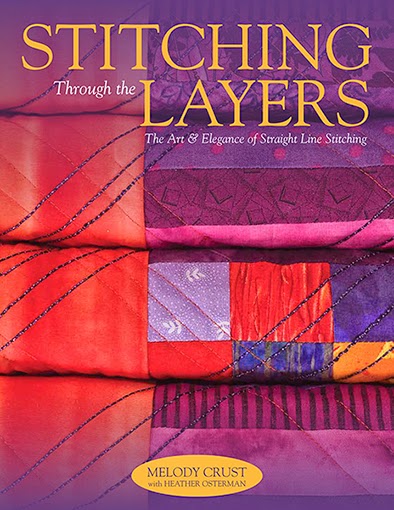 Thursday
Lecture - So Many Ideas; So Little Time
This lecture is a humorous look at how Melody designed and made her latest contemporary quilts including some from her books. Hear from her own lips how she recovered from quilt disasters and made "silk purses" from "sows ears". You can relate to these true confessions of the struggles and foibles of a prolific quilter. Lecture includes projected images and showing of many of my quilts.

I'm always touting visit your local guild. Some of you probably think that's because that's what I do, and I suppose there is some truth to that. But the real truth is there are some really great presenters out there.
Last night I had the privilege to hear Krista Withers. She describes herself as:
Mom
Wife
Quilter
Crafter
Friend
Artist
Long arm quilter
In any given order on any given day.
Glad to be here and be inspired by others.

I thought she should add inspired quilter!


Starting this fall she will be teaching at the Island Quilter  Quilt Shop on Vashon Island. Take a class, be inspired. 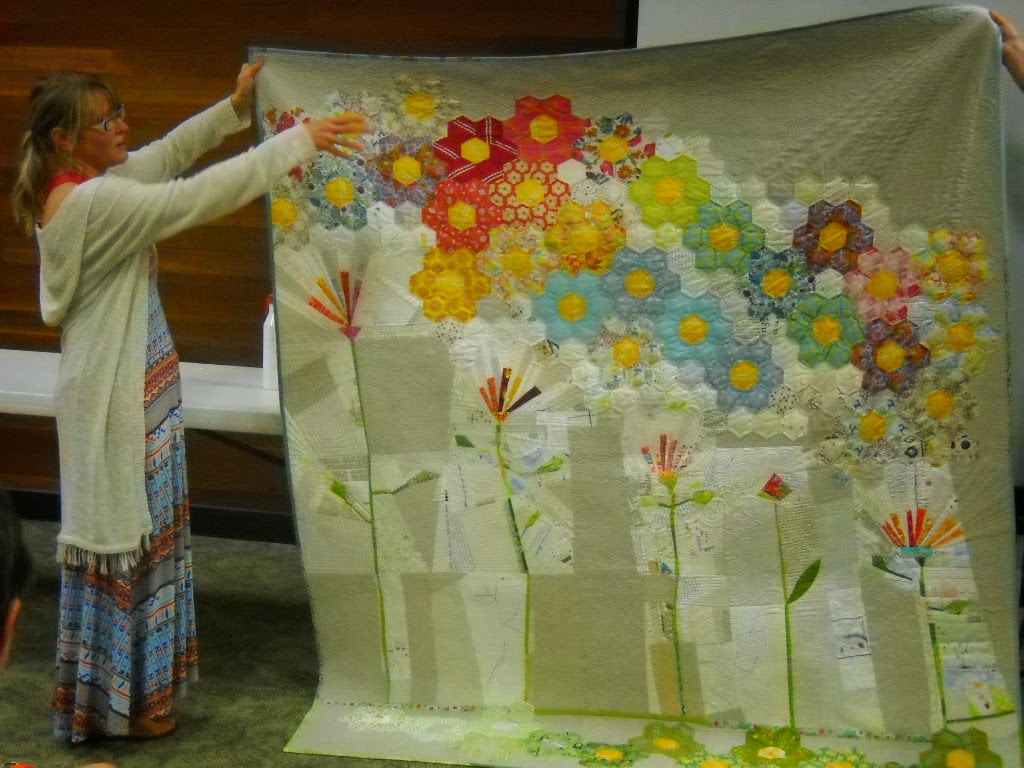 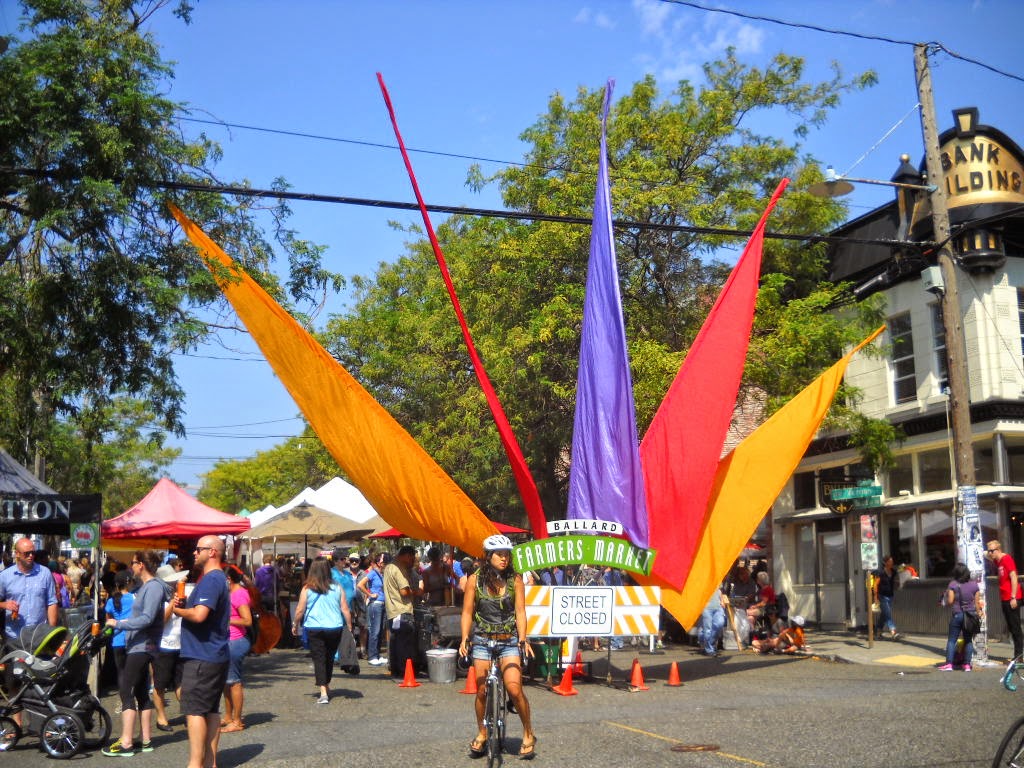 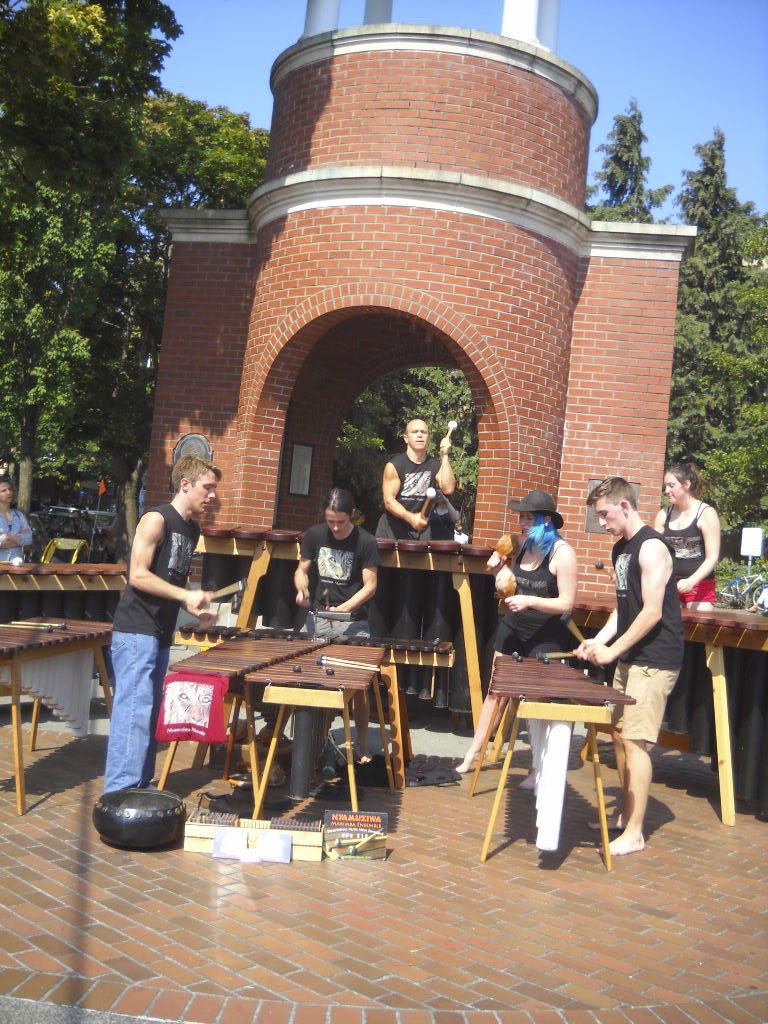 Ballard Farmers Market is located on historic Ballard Avenue open every Sunday from 10 a.m. to 3 p.m., year round, rain, snow, sun and/or wind. It is more reliable than the Post Office. (Please note, however, that they do take off for Christmas & New Year’s Day when they fall on a Sunday.)
NW, between Vernon Place NW and 22nd Avenue NW. It is 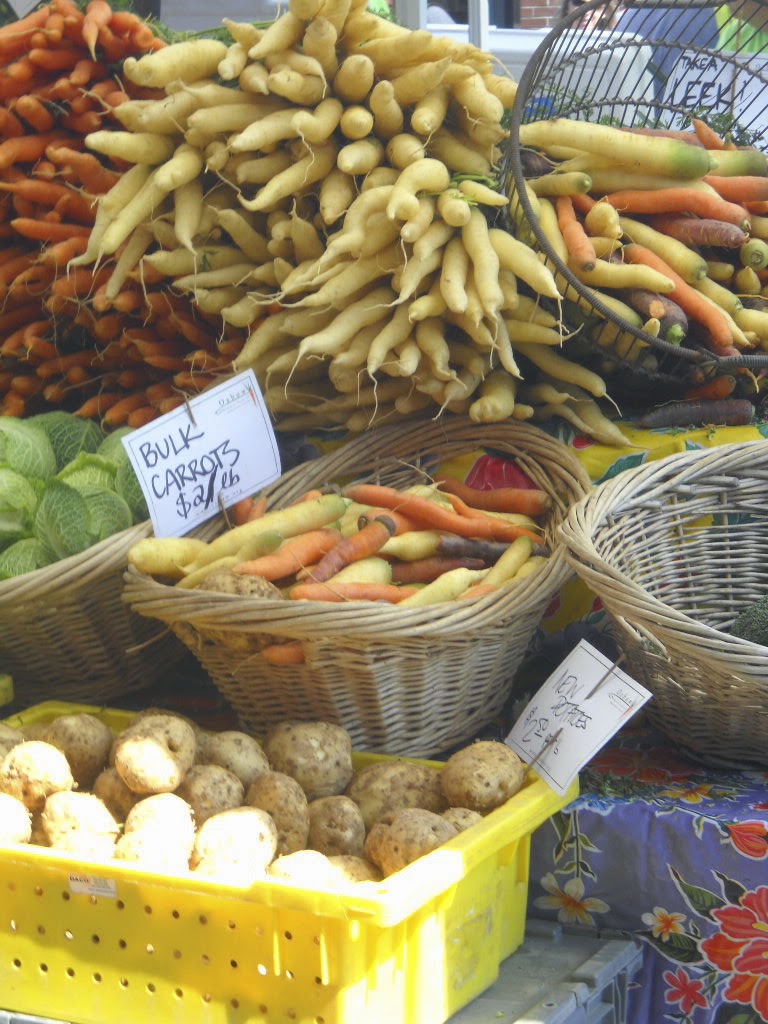 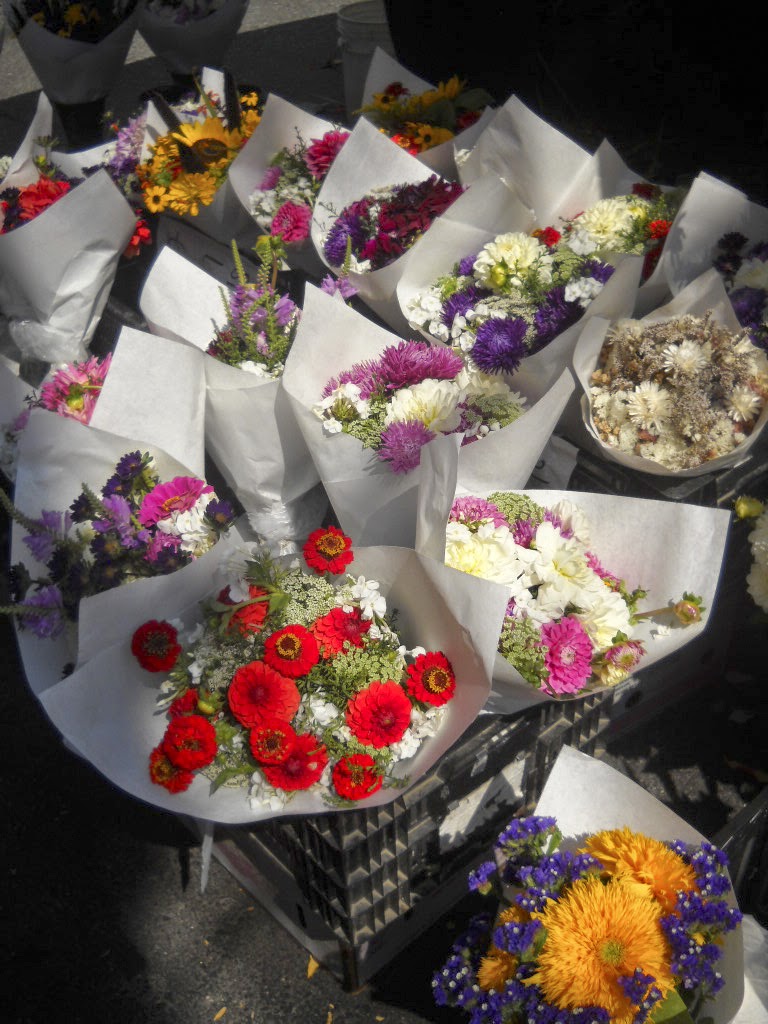 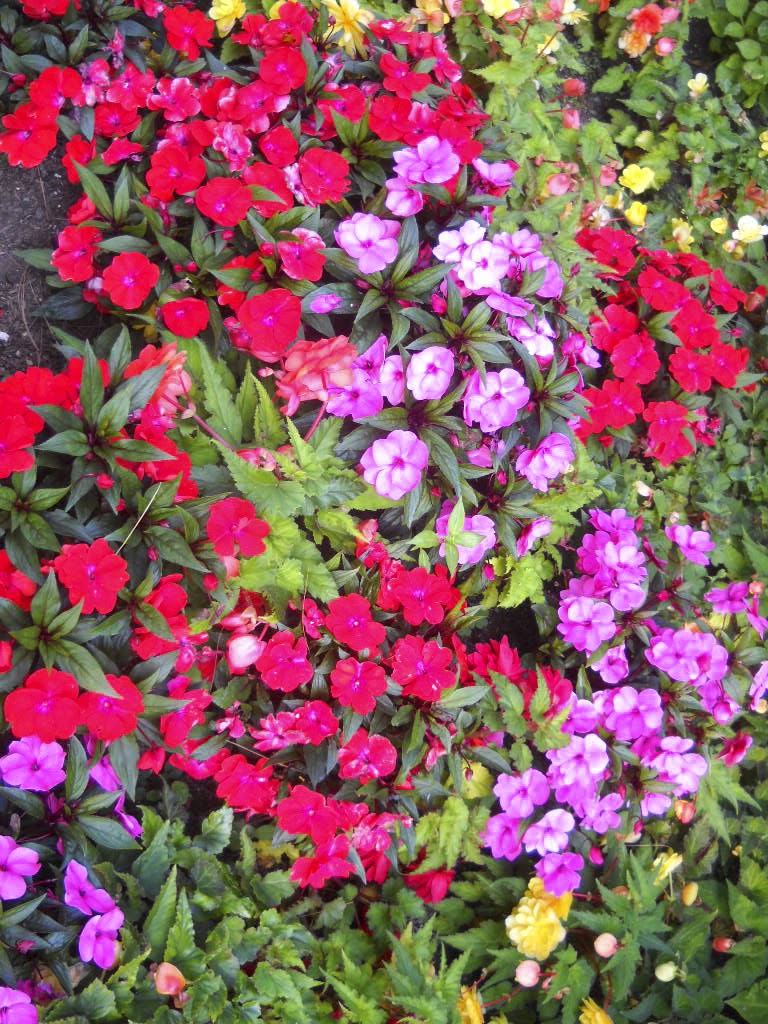 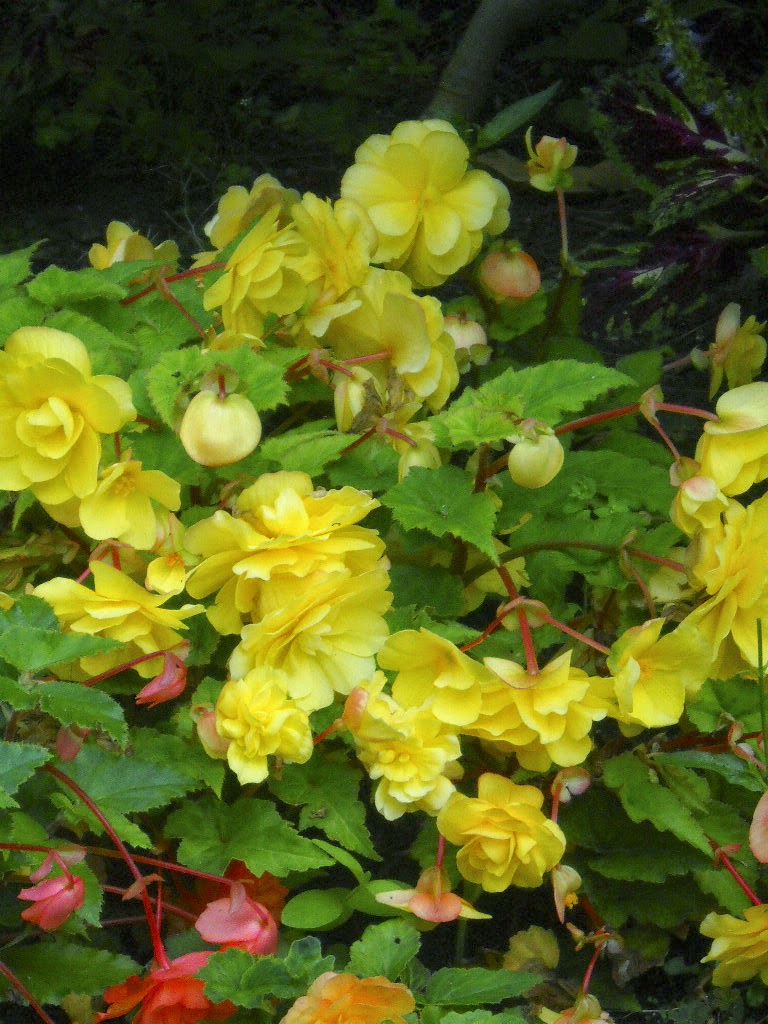 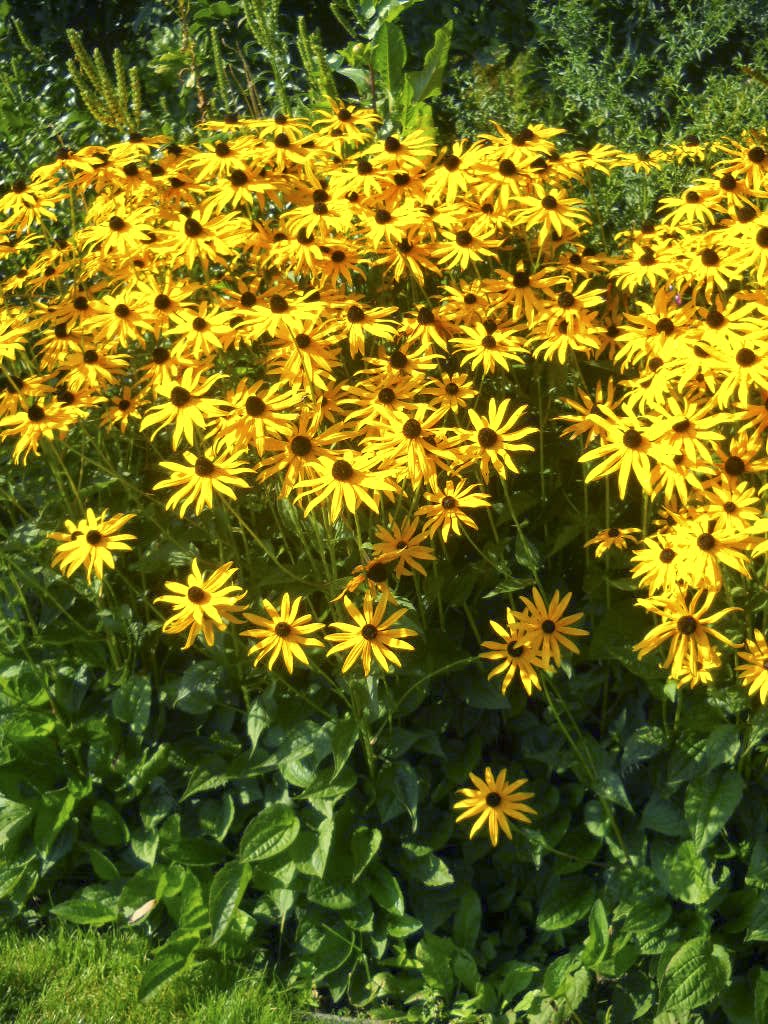 Rudbeckia hirta, commonly called black-eyed Susan, is a species of flowering plant in the family Asteraceae, native to the Eastern and Central United States. It is one of a number of plants with the common name black-eyed Susan. The plant also is a traditional Native American medicinal herb in several tribal nations; believed in those cultures to be a remedy, among other things, for colds, flu, infection, swelling and (topically, by poultice) for snake bite (although not all parts of the plant are edible).
Posted by Melody Crust at 6:00 AM No comments:

September 5 - 21, 2014
It's the biggest party in the state, and you're invited! Enjoy delicious food, wild rides, dazzling Washington State Fair.
entertainment and fun for the whole family at the

Yesterday was my day at the Fair. There is something for every one!

A dress (also known as a frock or a gown) is a garment consisting of a skirt with an attached bodice (or a matching bodice giving the effect of a one-piece garment). In Western culture, dresses are usually considered to be items of women's and girls' apparel.

National Grandparents' Day is a holiday celebrated since 1978 and officially recognized in a number of countries on various days of the year, either as one holiday or sometimes as a separate Grandmothers' Day and Grandfathers' Day. 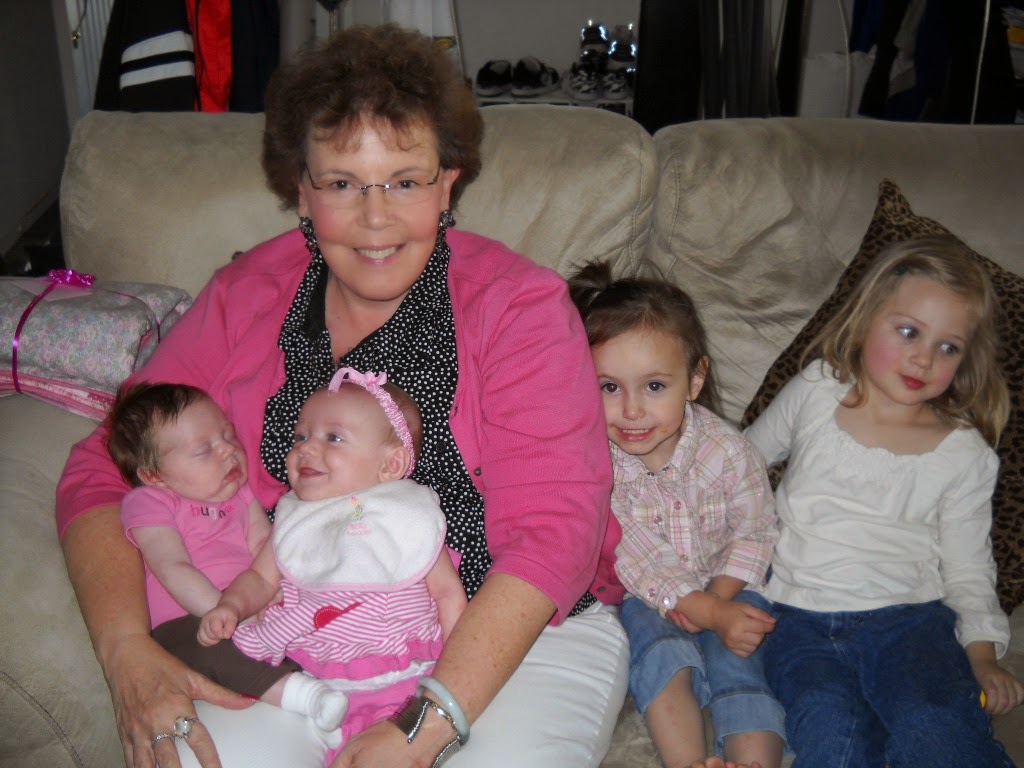 I finally had the chance to visit The American Art Company. Cloud Forrest and Waiting for the Sun we beautifully displayed.  If you can, the show is definitely worth a visit. The show runs through October 4, 2014 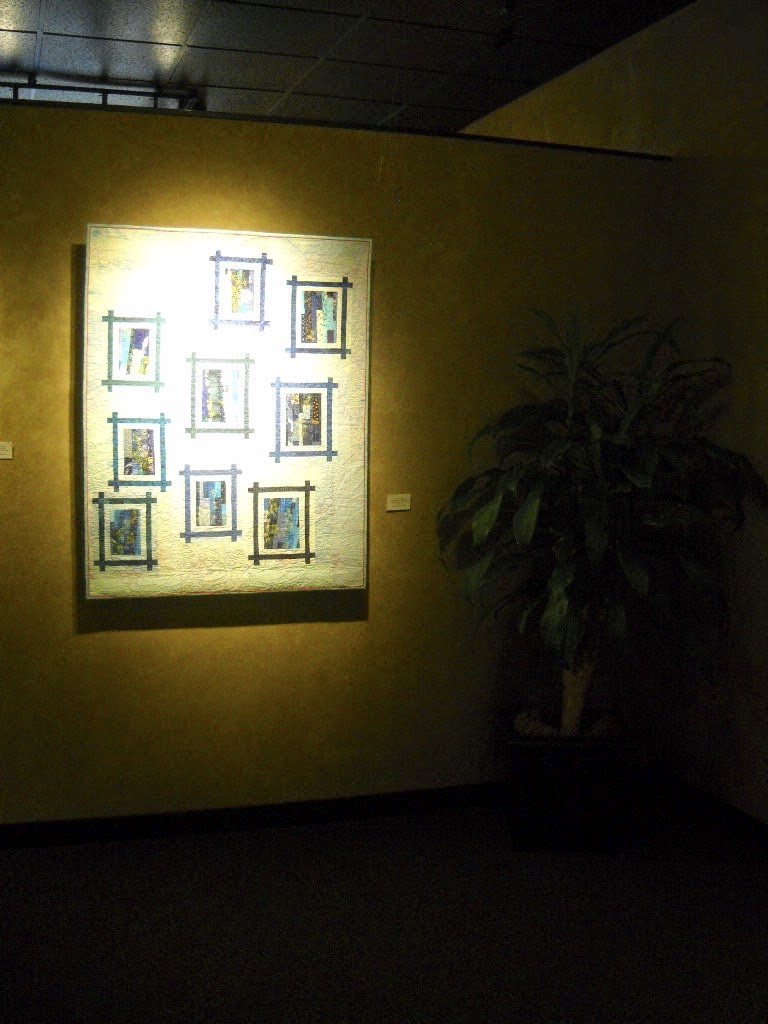 Playing in the Dye Pots

A doily is defined as "an ornamental mat, typically made of paper or fabric, and variously used for protecting surfaces or binding flowers, in food service presentation, or as a head covering or clothing ornamentation. It is characterized by openwork, which allows the surface of the underlying object to show through."

I must admit in my too many collections I have a few. Well a few more than a few. I decided now is the time to do something with them. So they got dunked into the dye pot the other day. 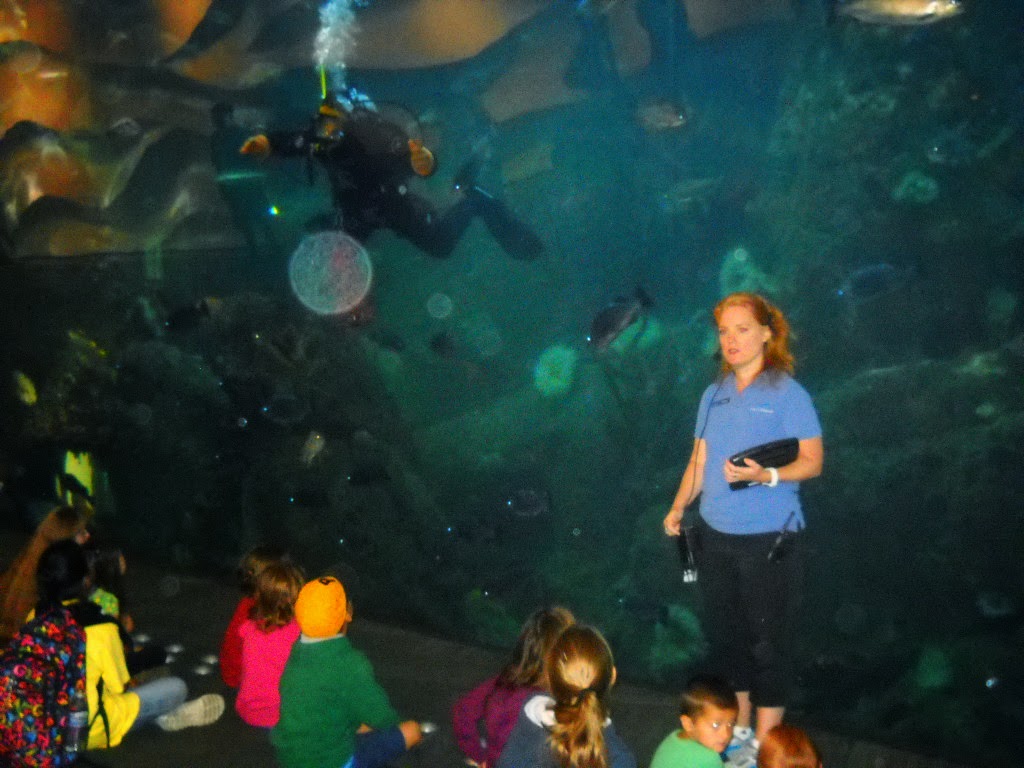 I love the Puget Sound region. Living here we get the best of all worlds. Beautiful summers, colorful falls and lots of activities for the young and old. I haven't been to the Seattle Aquarium in years. Family from out of town was a good excuse to visit it. The Aquarium is the 9th largest in the U.S. by attendance and among the top 5 paid visitor attractions in the Puget Sound region. Opened in 1977. Expanded by 18,000 square feet in 2007 with $42 million of new exhibits, gift and food service as well as exciting meeting and event facilities. 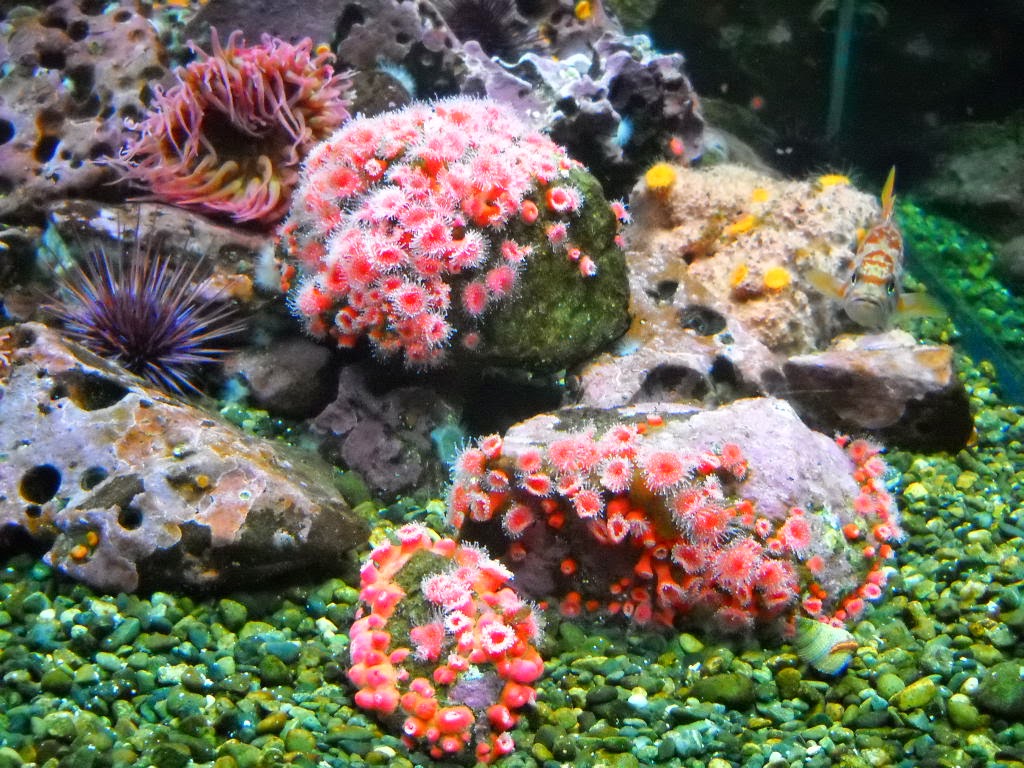 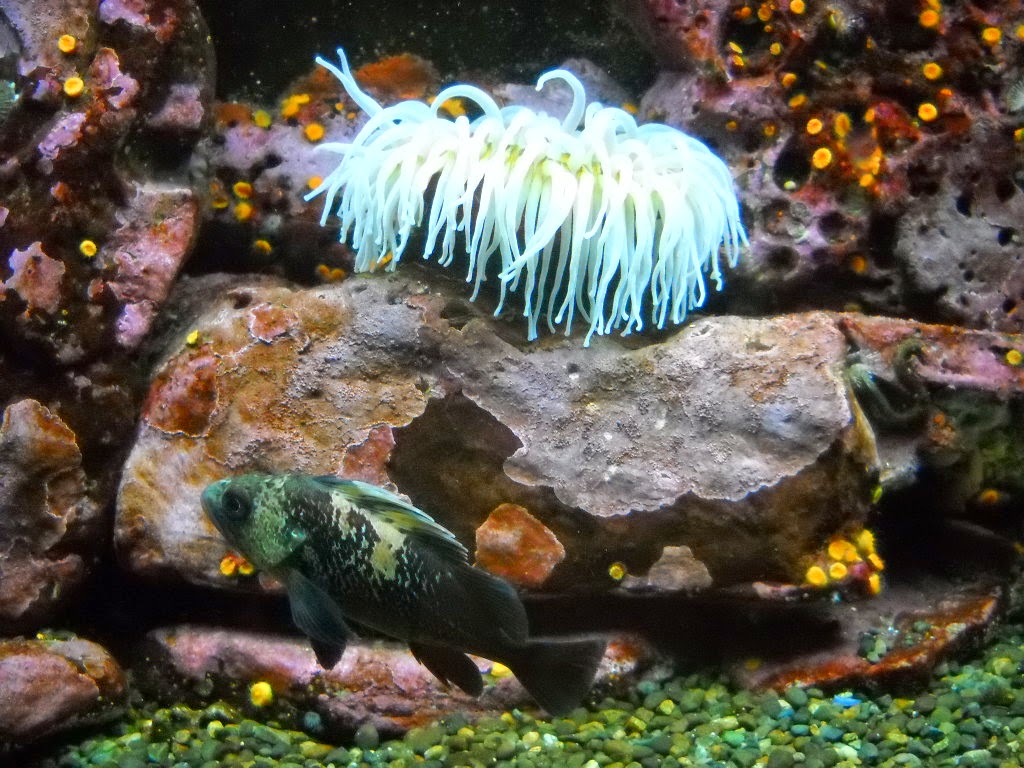