I love living in Seattle, but nothing beats some sunshine in the middle of a cold, rainy winter. Here are some pictures of Tampa's sights.

Ybor City is a historic neighborhood in Tampa, Florida located just northeast of downtown. It was founded in the 1880s by cigar manufacturers and was populated by thousands of
immigrants, mainly from Spain, Cuba, and Italy. For the next 50 years, workers in Ybor City's cigar factories would roll millions of cigars annually. 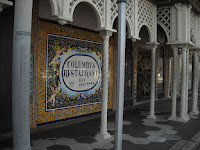 The Hernandez Gonzmart family has been making restaurant history since 1905 when they opened their landmark Columbia Restaurant in Tampa's Historic Ybor City, which today is Florida's Oldest restaurant, and the World's Largest Spanish restaurant. Today, 4th & 5th generation family members work hard to preserve the family's legacy that their great-grandfather Casimiro Hernandez Sr. created over 100 years ago when he opened the Columbia as a corner café frequented by local cigar workers.