A Day Away from Home

Montesano is a city, with as population of 3,976, on the way to the Washington coast. It is not really very much of a tourist destination, but loving small towns, we just had to stop.


A prominent feature of the town is the 1911 Grays Harbor County Courthouse. This is a three-story structure with a domed tower. The interior features murals of local history. Not to be missed is the dent in the front door made by the Sheriff as he fired at a fleeing felon 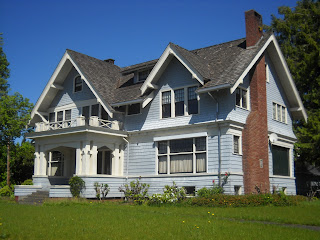 county seat of what was then called Chehalis County was moved to "the place of J.L. Scammons". Mrs. Lorinda Scammon was very religious and wished to have the place named Mount Zion. Another early settler, Samuel James, suggested "Montesano" as having a more pleasant sound and meaning about the same. The suggestion was approved and soon after, a post office was secured with the name Montesano.