Things to see in the canyon 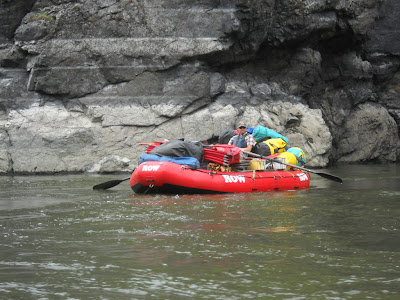 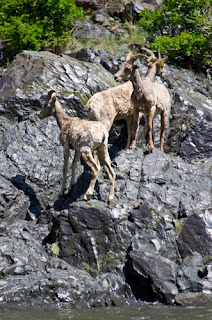 The country is amazing. Rugged rock walls and grassy slopes rise from the water, as you delve into the surging whitewater while it pulses through Hells Canyon. Where boulders and rock slides have rolled into the river, to find the biggest rapids in the Pacific North west.

Between rapids, the Snake River follows a scenic path: there we saw Rocky Mountain Bighorn Sheep.

The Kirkwood Historic Ranch is an area rich in river history from early Native American occupation to pioneer ranching life. The historic ranch offers a taste of canyon life in the 1930s with the original ranch house, bunk houses and other out-buildings. 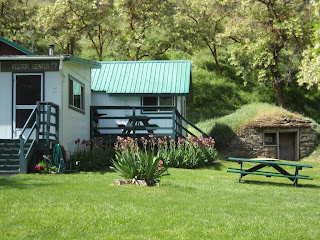 On the river near Dug Bar, the visitors center of the Hells Canyon National Recreation Area is as beautiful as it is remote. 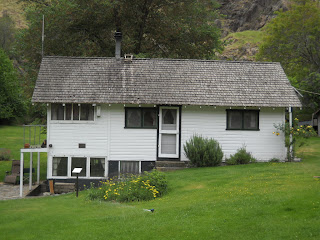 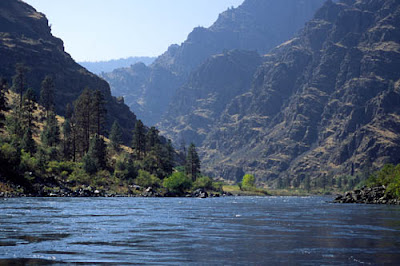 Rustic wilderness with the comforts of home - that's the Copper Creek Lodge, 70 miles upriver and deep in the wilds of Hells Canyon. Swim and sun at the river's edge, explore the back country on nature trails, or read in the shade of the Trees of Heaven.

Savor the serenity of nighttime in Hells Canyon where the moon and stars are jewels on black velvet. 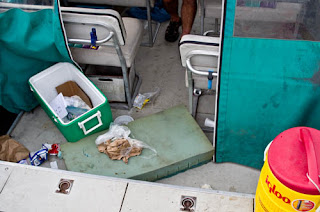 And the bear ate our lunch! Sometime in the night the bear decided he wanted our lunch, so he climbed on the boat and ate it! 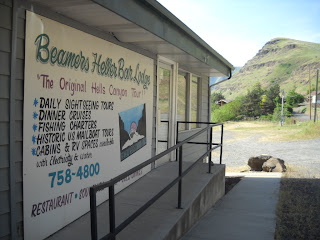 We took the weekly US Mail boat that delivers the mail by boat to the handful of year round residents that reside in Hells Canyon. Hells Canyon is a 10-mile wide canyon. It is North America's deepest river gorge at 7,993 feet and part of the Hells Canyon National Recreation Area. 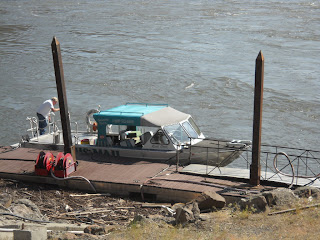 In 1806, three members of the Lewis and Clark Expedition entered the Hells Canyon region along the Salmon River. They turned back without seeing the deep parts of the canyon. It was not until 1811 that the Wilson Price Hunt expedition explored Hells Canyon while seeking a shortcut to the Columbia River. Hunger and cold forced them to turn back, as did many explorers who were defeated by the canyon's inaccessibility. There remains no evidence in the canyon of their attempts; their expedition journals are the only documentation.

The early miners were next to follow. In the 1860s gold was discovered in river bars near present-day Hells Canyon National Recreation Area, and miners soon penetrated Hells Canyon. Gold mining was not profitable here. Evidence of their endeavors remains visible along the corridor of the Snake River. Later efforts concentrated on hard-rock mining, requiring complex facilities. Evidence of these developments is visible today, especially near the mouth of the Imnaha River.[6] 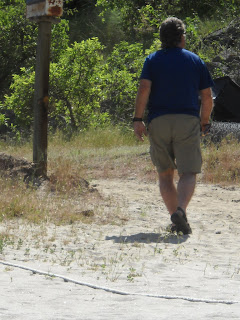 In the 1880s there was a short-lived homesteading boom, but the weather was unsuited to farming and ranching, and settlers soon gave up. However, some ranchers still operate within the boundaries of the National Recreation Area.
Posted by Melody Crust at 6:00 AM No comments: 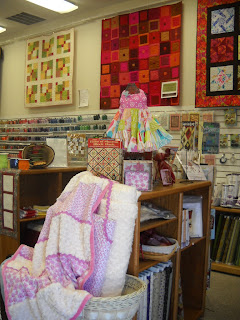 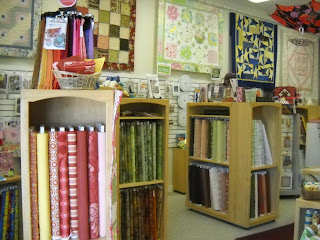 Spring in the Palouse

Life is always an adventure, my husband Charles and I decided to make a quick trip to the Palouse.

The Palouse is a region of the northwestern United States, encompassing parts of southeastern Washington, north central Idaho. It is a major agricultural area, primarily producing wheat and legumes. Situated about 160 miles north of the Oregon Trail, the region experienced rapid growth in the late 19th century, and for a brief time surpassed the population of the Puget Sound region of Washington.The region is home to two land grant universities, the University of Idaho in Moscow and Washington State University in Pullman. 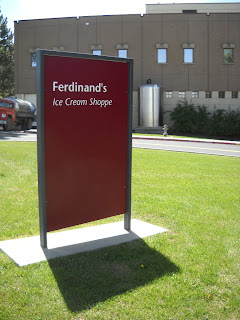 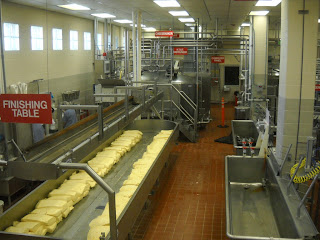 Quilt Show - It's all about red and white

My favorite color is red! Funny how this favorite influences my work. 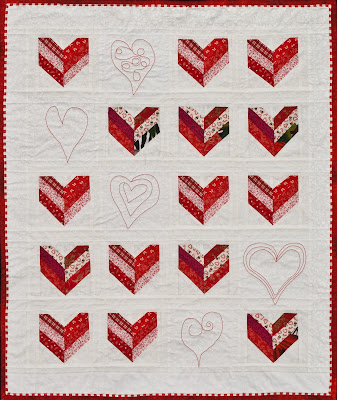 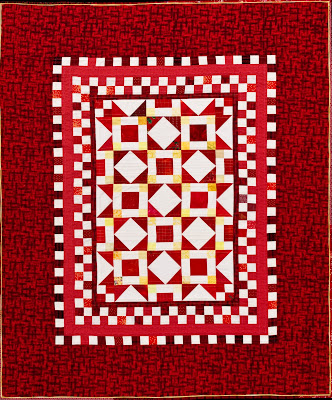 Sometime I just have to sew! 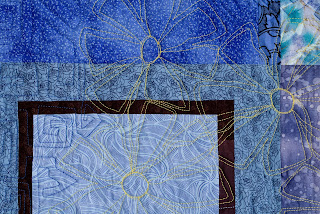 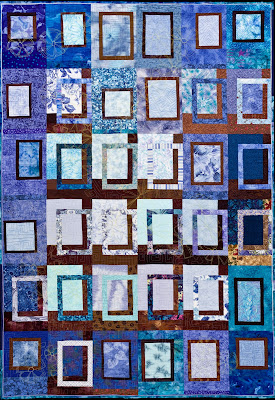 The best thing about my job is the sewing! I love the feel for the fabric, seeing what happens when I sew two fabrics together, the texture that I can get with the thread.
Posted by Melody Crust at 5:30 AM No comments:

Living Colour is the seventh traveling exhibition mounted by The Association of Pacific West Quilters. With the phrase “Living Colour” as inspiration, quilters and fiber artists used an intriguing mix of images, techniques, and styles from traditional to contemporary in their interpretation of the theme. This collection has travelled the country and been viewed by thousands of quilters, quilt-appreciators, and art lovers.
Now, from the comfort of your home, you can make one...or more...of these fantastic quilts your own. The entire 48 quilt collection will be sold in two auctions - see the groupings on our website. Group A runs from May 10-22 and Group B will be held June 8-22.

Stitching Through the Layers is  available at Quiltworks Northwest in Bellevue WA.

Looking for a great workshop? This is the only shop in the Pacific Northwest where I can be found teaching on a regular basis. Great place to buy fabric and all things quilty. Fun knowledgeable staff,  Bernina machines and service. A wonderful selection of beads.

I'll be there with A Fine Line, Creating the Quilting Design and Borders: The Final Chapter, June 16, 2012.
Posted by Melody Crust at 5:00 AM No comments:

Someone asked me the other day if I keep a sketchbook or art journal?  In what ways?  How does your sketchbook influence your work?  What techniques do you use in a sketchbook?  I had to think about it for a minute and decided the answer was yes, but not in any traditional sense of the word. I do not have one book that I draw or doodle in, I do have note books full of ideas or things that interest me. 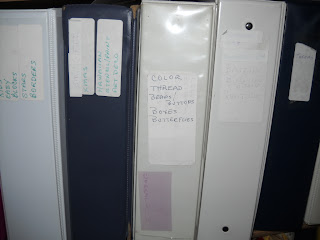 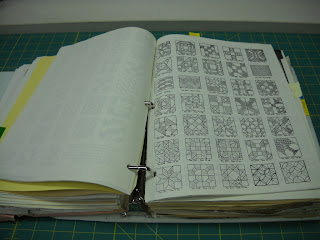 And of course I have photos, hundreds of them. I love this digital world. All my photos are filed under things like quilt ideas or thread easy to find with a touch of my computer. Here is a photo I took in Savannah last year, a wonderful idea for a quilting pattern, just sitting in my files waiting for just the right quilt! 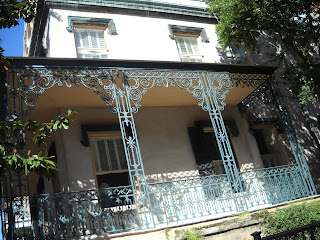 Exuberant clothes were a common sight in the oasis cities of Central Asia. During the 19th century, patrons wore rich colors and mysterious designs on a daily basis. Their encouragement led to a flourishing use of ikat, a labor intensive process that requires many stages and layers of experience to complete. Positioned as a trading center where goods and people flowed in from India, China, Iran and Russia, Central Asia fostered an aesthetic that made the most of overlapping influences.

This exhibition will recreate a sense of walking into a crowd of cosmopolitan clients who wear robes of distinctive boldness. As an English visitor (William Eleroy Curtis) wrote in 1911: “Everybody wears a coat like a rainbow… No matter how humble or hungry a man may be, and even if he has but a single garment, it is made of the most brilliantly colored material he can find.” Over 40 robes will provide a vision of the oasis crowd. Some feature sharp graphic designs of rigorous abstraction, but others favor delicate harmonies with flowing floral motifs. Scorpions and Arabic script, paisleys and European florals, jeweled tassels and cypress trees swirl together in a design pool that reflects oasis life.

—Pam McClusky, Curator of Art of Africa and Oceania