Damask is a reversible figured fabric of silk, wool, linen, cotton, or synthetic fibers, with a pattern
formed by weaving. Damasks are woven with one warp yarn and one weft yarn, usually with the pattern in warp-faced satin weave and the ground in weft-faced or sateen weave. Twill damasks include a twill-woven ground or pattern.

The production of damask was one of the five basic weaving techniques of the Byzantine and Islamic weaving centers of the early Middle Ages. Damasks derive their name from the city of Damascus—in that period a large city active both in trading (as part of the silk road) and in manufacture. Damasks became scarce after the 9th century outside of Islamic Spain, but were revived in some places in the 13th century.
The word "damask" first appeared in records in a Western European language in the mid-14th century in French. By the 14th century, damasks were being woven on draw looms in Italy. From the 14th to 16th century, most damasks were woven in one color with a glossy warp-faced satin pattern against a duller ground. Two-color damasks had contrasting color warps and wefts, and polychrome damasks added gold and other metallic threads or additional colors as supplemental brocading wefts. Medieval damasks were usually woven in silk, but weavers also produced wool and linen damasks.

Modern damasks are woven on computerized Jacquard looms. Damask weaves are commonly
produced in single-color weaves in silk, linen, or synthetic fibers such as rayon and feature patterns of flowers, fruit, and other designs. The long floats of satin-woven warp and weft threads cause soft highlights on the fabric which reflect light differently according to the position of the observer. Damask weaves appear most commonly in table linens and furnishing fabrics, but they are also used for clothing.

This is often used to give petal designs and small floral patterns. It consists of a single loop of chain than the continuous pattern. Lazy daisy is one of the extremely easy stitches. This stitch need not be limited to just petals and leaves, but can be used for more complicated designs too.


A 2014 survey finds that Quilters in the United States spend a whopping $3.76 billiona year on their fiber art passion.

There are more than 16 million active quilters in the country. That means one out of every 20 Americans quilt!

These were some of the key findings of the 2014 survey:

Dedicated Quilter is defined as one who spends more than $500 a year on quilting.

The Dedicated Quilter owns, on average, almost $13,000 worth of tools and supplies and has a stash of fabric worth nearly $6,000, which the majority (88%) store in a studio or room dedicated solely to sewing and quilting.

Quilters are also tech savvy, with 87% owning a tablet or eBook reader today. The percentage of quilters who access the Internet daily has grown to 86%, up from 73% four years ago.
Posted by Melody Crust at 7:00 AM No comments:

I have been stitching on my latest work. Some new ideas means more samples are necessary. 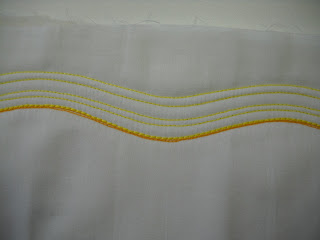 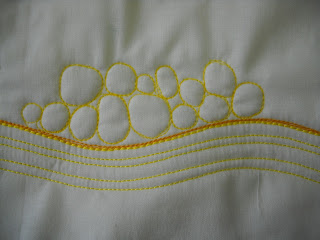 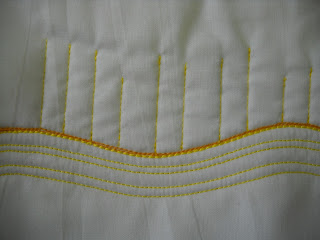 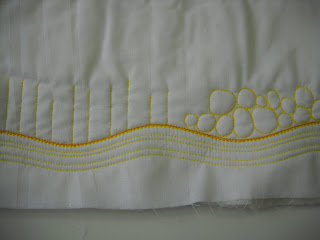 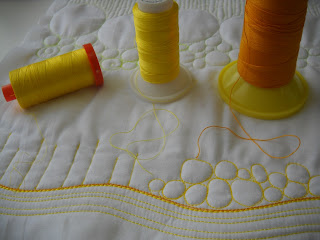 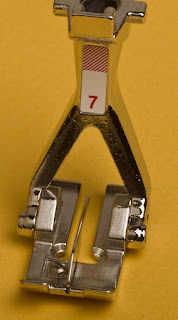 The foot has a tall metal ridge in the center causing the stitch to form a loop. To make large, fun thread loops, lower the top tension to put more thread on top. These stitches need to be secured with other, perhaps decorative stitches, fusible interfacing or seam sealant.
Posted by Melody Crust at 9:50 AM No comments:

Alex Anderson just made a really short YouTube video telling you all about it! Check it out!

Posted by Melody Crust at 10:09 AM No comments: 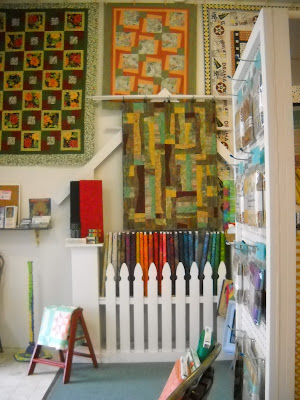 Buckley is a small town of almost 4500 people, located along the highway to Mt Rainier. Located just off state highway 410, is Front Porch Quilts. A small, but cute shop, with excellent conversation and expert knowledge. 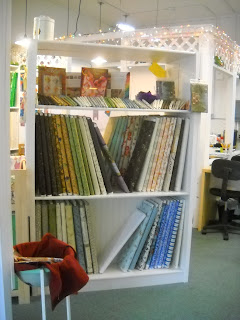 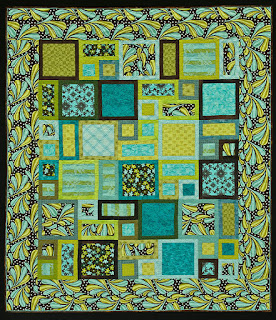 I'm not Irish as far as I know, but I thought I would share some of my green quilts for those who are. 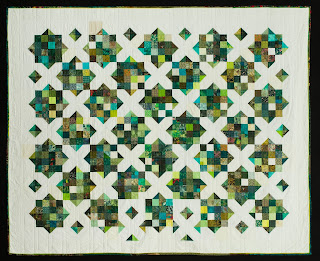 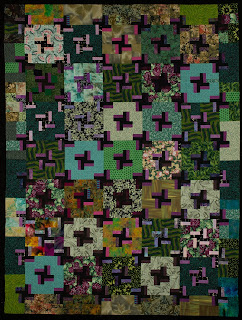 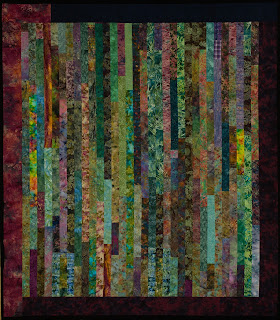 Posted by Melody Crust at 11:42 AM No comments:

Big news here! In honor of International Quilt Day (March 19, 2016), The Quilt Show will "open" all of their  shows from the first -seventeen series--that is, from show 100 through show 1713--for the entire weekend of March 18-20. That means that everyone will have the chance to view these 221 shows, featuring some of the quilting world’s leading artists, for FREE.  Including me! 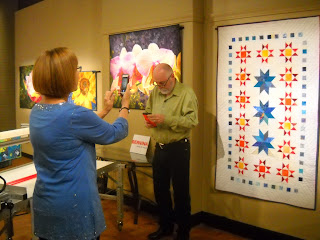 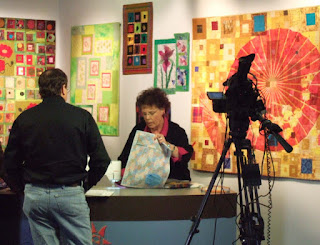 Be sure to check them out!
Posted by Melody Crust at 6:30 AM No comments:

Its no surprise that I am a fiber person. Besides collecting quilters cottons, I have managed to amass quite a bit of other stuff. I'm not sure what the general term for all this 'fabric' is but the old stuff I call 'linens'.  The defination of  Linens being  "household goods intended for daily use, such as bedding, tablecloths and towels."

A Bit of History:
The earliest known household linens were made from thin yarn spun from flax to make linen cloth. Ancient Egypt, Babylon, and Phoenicia all cultivated flax crops. The earliest surviving fragments of linen cloth have been found in Egyptian tombs and date to 4000 B.C.

Linen was an especially popular cloth during the Middle Ages in Europe, and the tradition of calling household fabric goods "linens" dates from this period. According to Medieval tradition, which survived up until the modern era, a bride would often be given a gift of linens made by the women in her family as a wedding present, to help her set up her new married home. In France this was called a trousseau, and was often presented to the bride in a wooden hope chest.

The Industrial Revolution brought huge changes to cloth manufacturing. The rise of European colonialism at the same time helped support the rapid growth of cloth production by creating many cheap sources of raw materials. British cloth manufacturers would import raw cotton from America and the British West Indies to Ireland, where it would be spun into yarn. The yarn would be imported into England, where mechanized factories employed thousands of workers, who would weave cloth on industrial looms. In 1781, a cloth producer from Manchester testified about his business to a committee of the House of Commons in the British Parliament. He stated that he employed 6000 workers, who would print and stamp 60,000 yards of cotton and linen fabric a year. Other European countries manufactured and traded their own types of household linens as well, and mass manufacturing techniques and trade competition gradually made affordable household linens common.

Today, the term "linen" is still used for all related products even though most are made of cotton, synthetic fabrics, or blends.

In the next few weeks I'll post pictures of my 'stuff' and ways I use it in my quilts.

Stitching Through the Layers - Quilting with STRAIGHT Lines 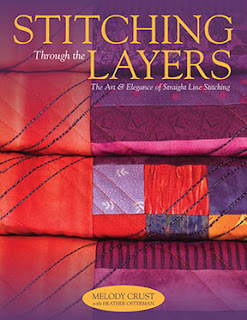 I love straight line quilting, it works so well on so many quilts, and it’s so easy! The possible combinations of straight lines are endless. Don’t stress with the process, remember to breath! I like the look of lines that aren’t perfect. I do try to keep them from looking too messy. Depending on how densely you quilt it can be time quite consuming (take breaks! You don’t have to finish quilting all at one time!). The end results are wonderful. Have fun playing with straight lines! 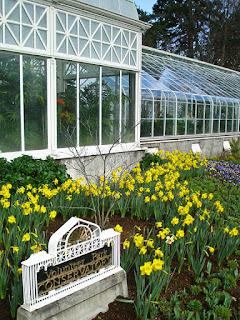 to rise, leap, move, or act suddenly and swiftly, as by a sudden dart or thrust forward or outward, or being suddenly released from a coiled or constrained position:  spring is in the air

I love the Pacific Northwest. We have seasons, but moderately. Winters usually are not too cold, summer not too hot. Still we have seasons.

Spring is definitely here! I note that  by the blooms of my favorite flower; daffodils!! 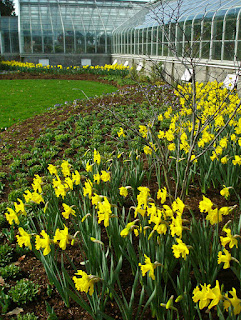 I often audition quilting patterns. I like to see what a motif will look like before I stitch it on my quilt. Since marking isn't my thing, I prefer to use Golden Threads Quilting Paper. It tears away cleanly and easily without pulling out my stitches.The trick is to ALWAYS use a permanent marker. The marker assures that the mark will stay with the paper.

I Bought a New Ruler 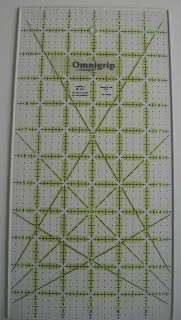 Sounds crazy but I love my new ruler. I prefer Omnigrid Rulers because they offer accuracy, performance and quality. But believe it or not the do wear out.I use my 6 x 12" so much that the paint rubs off eventually. 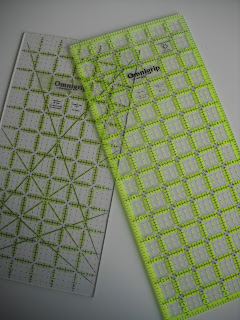