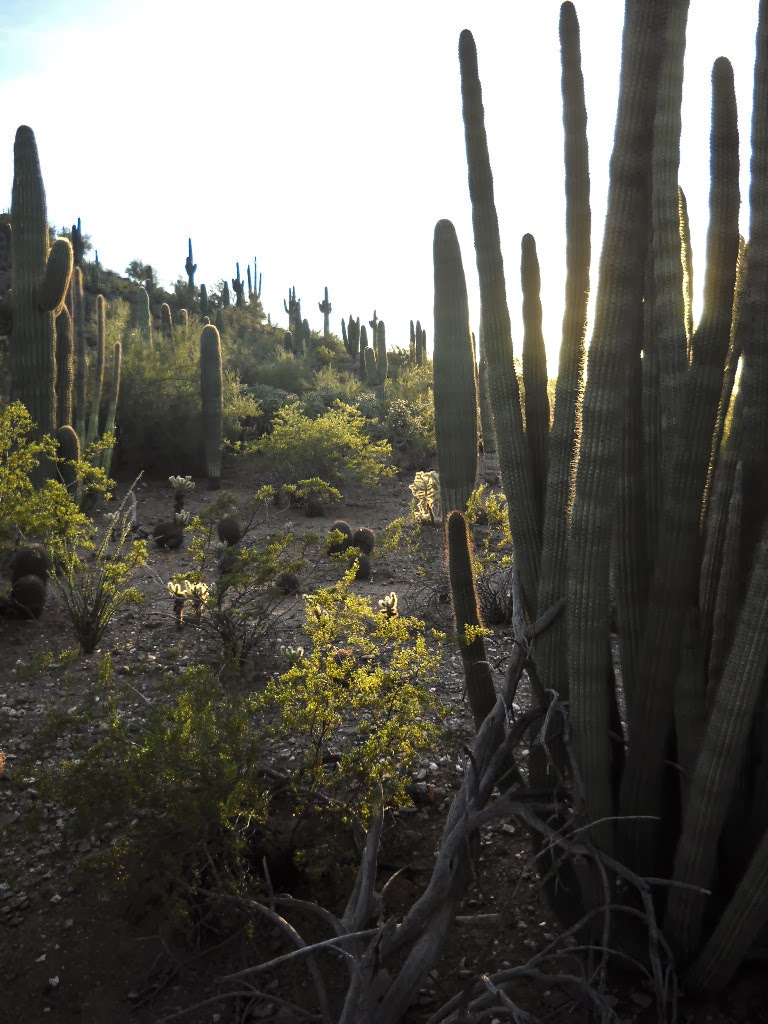 The Desert Botanical Garden is a 140 acres botanical garden in Phoenix, Arizona. Founded by the Arizona Cactus and Native Flora Society in 1937, the garden now has more than 21,000 plants, one-third of which are native to the area, including 139 species which are rare, threatened or endangered. Of special note are the rich collections of agave and cacti. Plants from less extreme climate conditions are protected under shade houses. It focuses on plants adapted to desert conditions, including an Australian collection, a Baja California collection and a South American collection.

Dale Chihuly was featured at the Desert Botanical Garden with a stunning exhibition of his work. 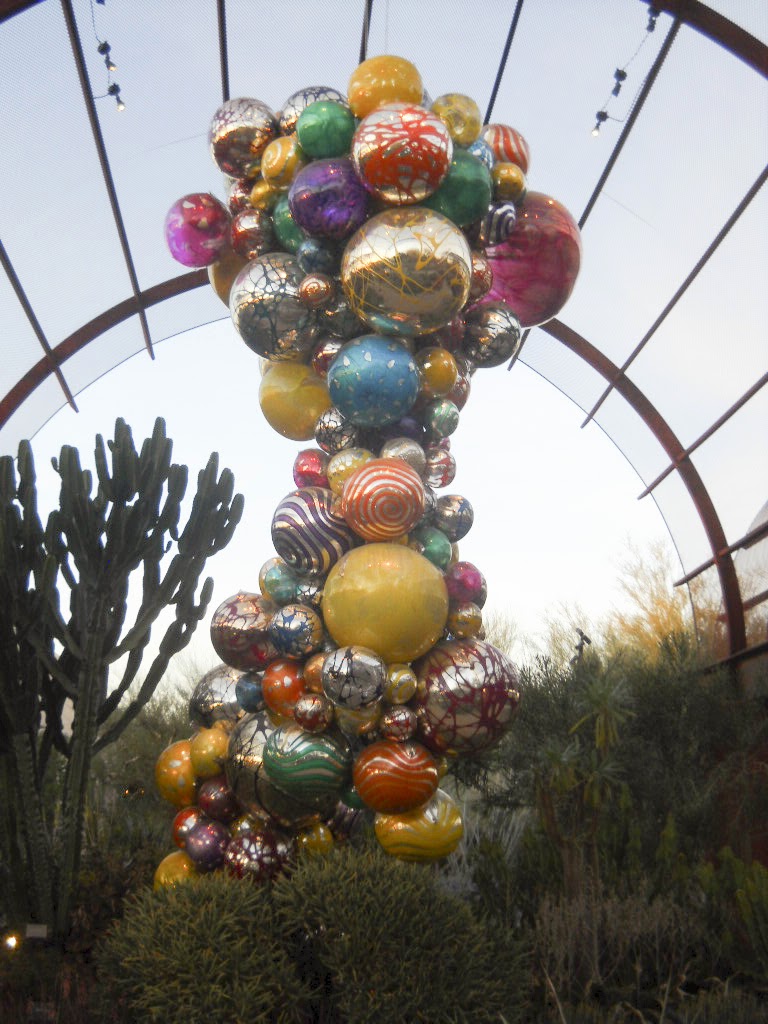 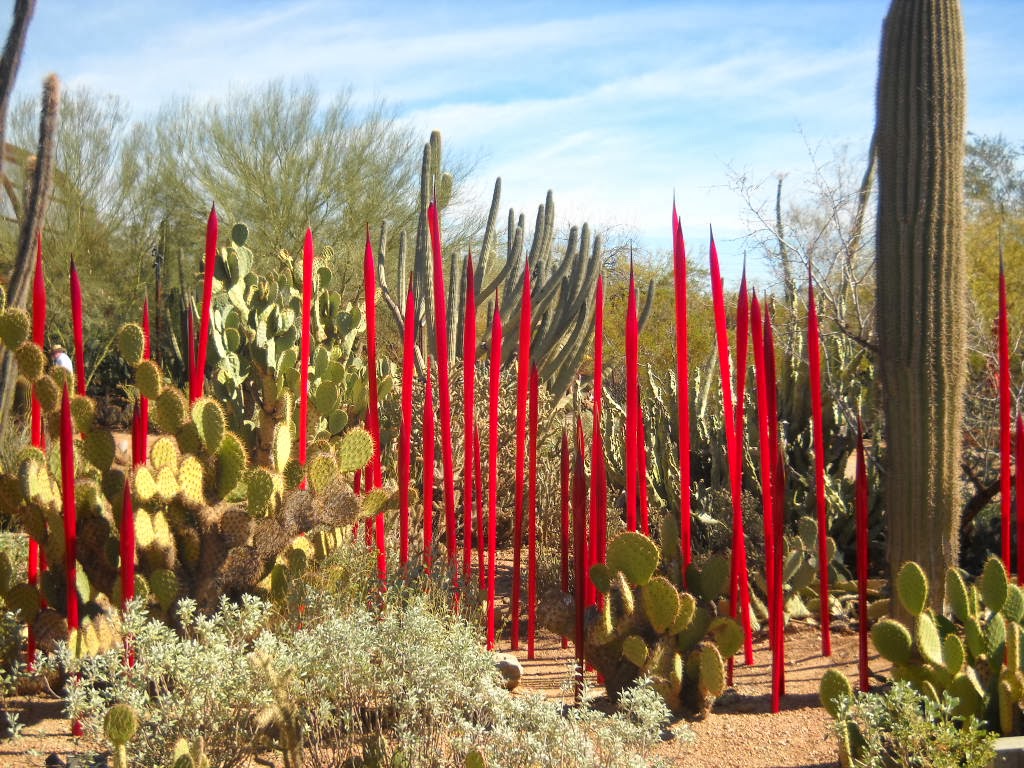 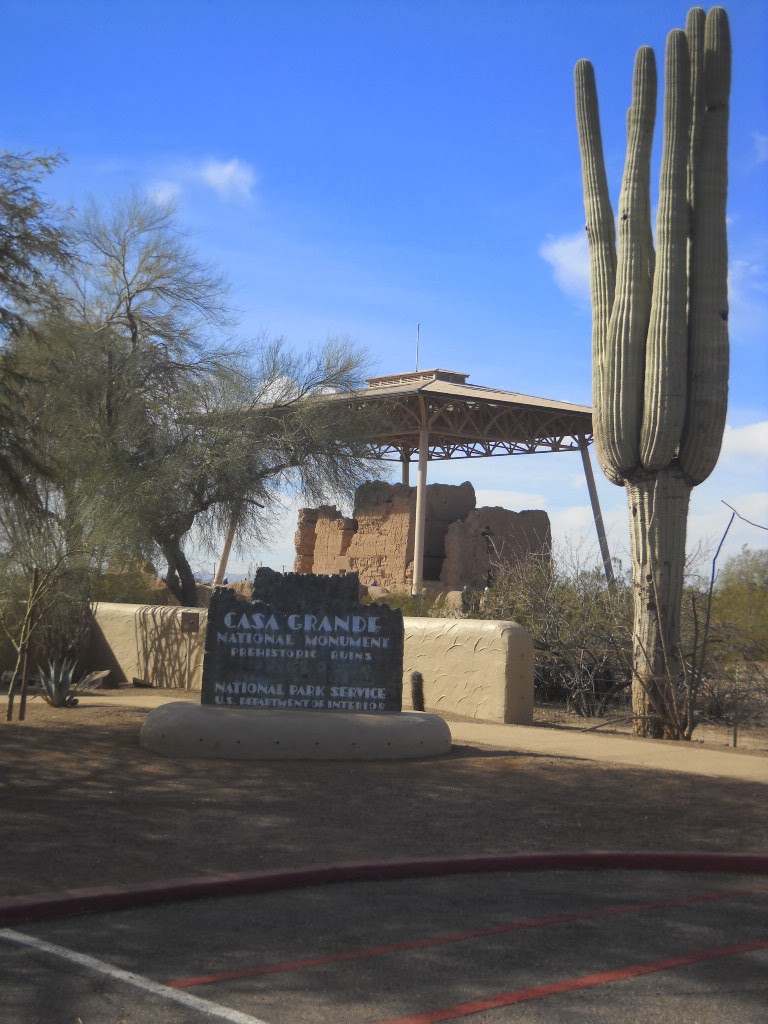 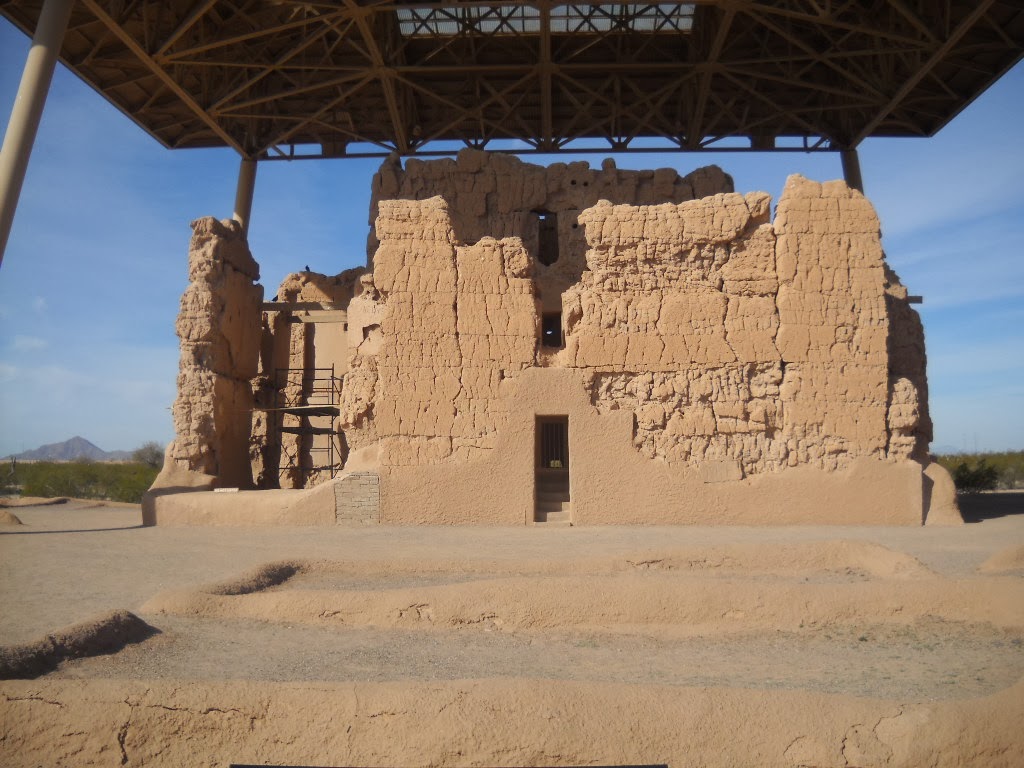 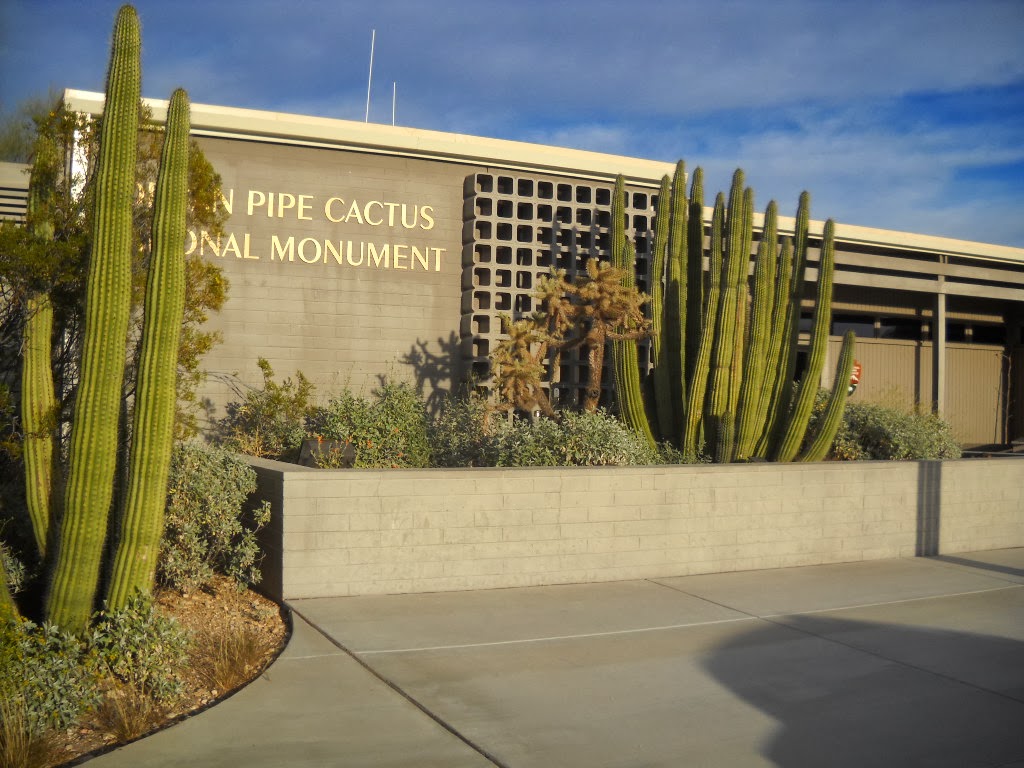 Just down the road from Ajo, is the wonderful Organ Pipe Cactus National Monument. (You do realize that this isn't a short 'down the road'?) This cactus species has several narrow stems that rise vertically, growing from a single short trunk just above the ground level. These stems are about 6 inches thick and grow to a height of 16 feet.It takes 150 years to reach maturity. 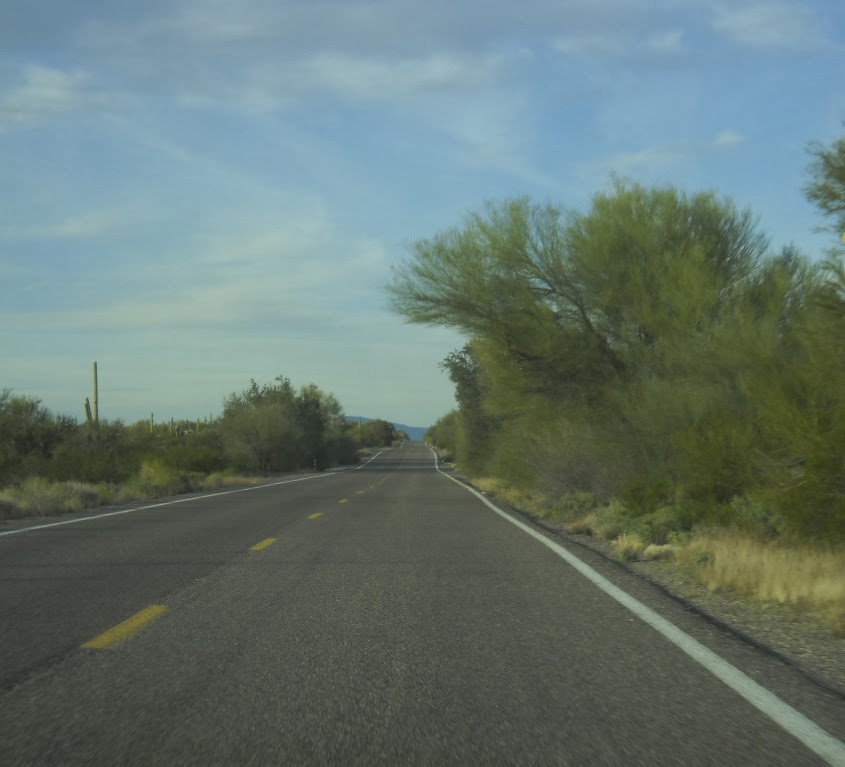 T
And some of the straightest roads I have ever seen! It looks like someone used a ruler to plan them!
Posted by Melody Crust at 6:00 AM No comments:

I'll be there with lots of workshops something for every one!

Interested in quilting design? Two classes Stitching Through the Layers, The Art and Elegance of Straight Line Quilting Design 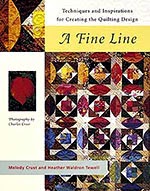 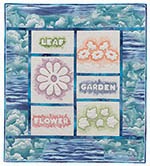 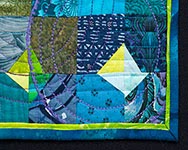 Anything else?
For the Love of Color 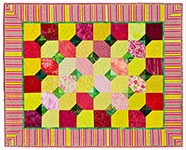 A laugh filled lecture? So Many Ideas; Sew Little Time. 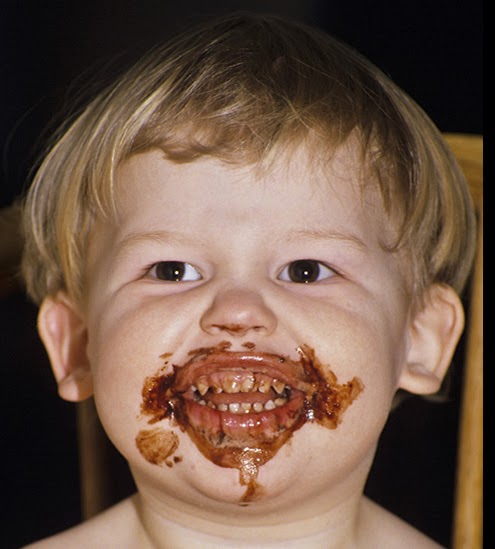 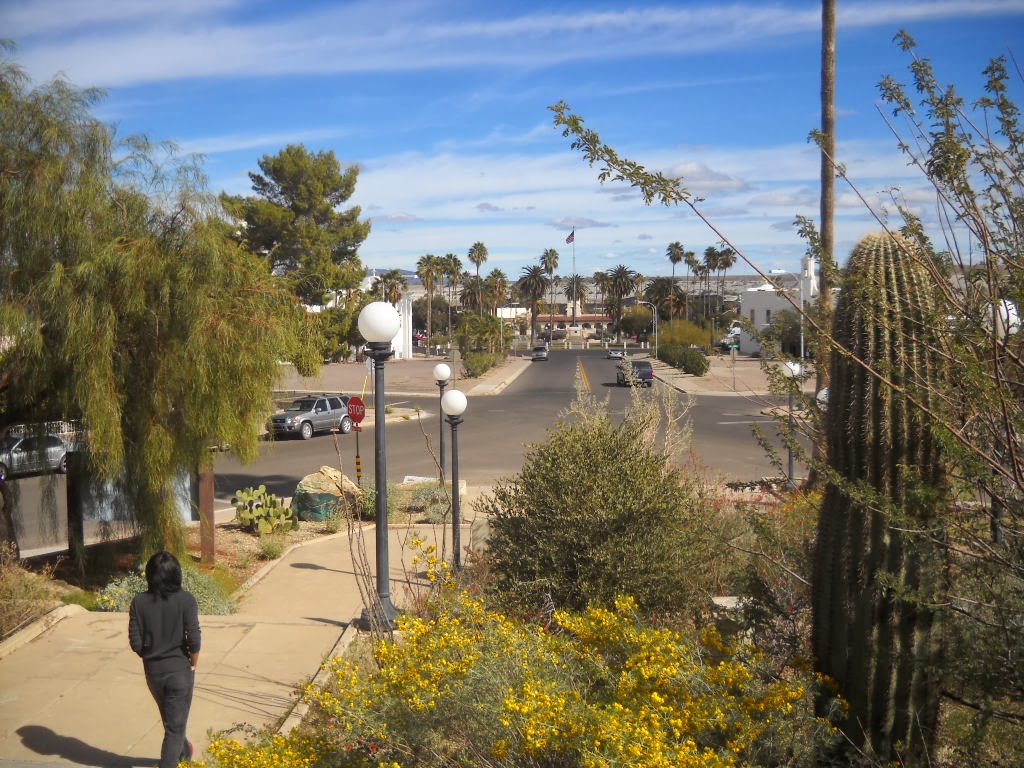 Ajo is the quintessential southwestern mining town, with occasional strikes and shutdowns. The 1983 strike that began in July that year crippled the community with acrimony on both sides. Though the mine struggled on with non-union labor, copper prices plummeted and so did Ajo. Mining stopped in 1985. Many retired people bought houses and started a new era in Ajo‘s history. The acquisition of the old Curley School and the plaza by the International Sonoran Desert Alliance has both preserved and altered the flavor of the community, which is home to many churches, fraternal groups, and social and cultural organizations with long and rich histories of their own.

I visited the Ajo Piecemakers' Quilt Show "Quilting in the Sonoran Desert" at the Curley School Auditorium. There were new quilts, a quilt raffle, a Bed-turning presentation of antique and unique quilts, quilting demos, vendors. 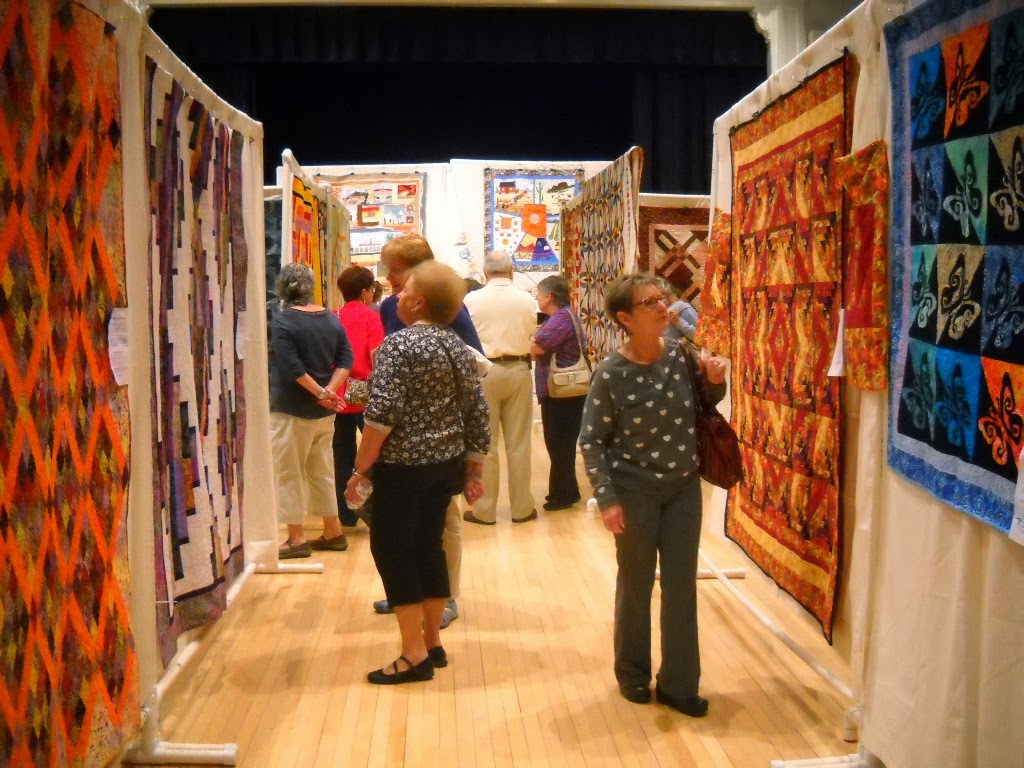 Two Weeks of Fun in the Sun! I'm off to Arizona

Things are different in the desert. The sky is bluer. The stars are brighter. The sunsets stop you in your tracks. It’s a feeling that can’t be conjured, landscaped or kindled with twinkling bulbs.
America’s sixth-largest city still has real cowboys and rugged mountains and the kind of cactus most people see only in cartoons. Phoenix is the gateway to the Grand Canyon, and its history is a testament to the spirit of puebloans, ranchers, miners and visionaries.

Some quilts just need a fast finish. I just learned this method from my friend Linda.

It really only works well on smaller quilts, because the batting and quilt top need to be cut the same size. Add the backing which is at least 1 1/2" larger than the front all the way around. Quilt.

If you ever want to go on a vintage hunt in Seattle this is my favorite spot. Rhinestone Rosie's shop is divine. I found so many great things. This is a Mother-Daughter team and they have put a lot of love in this shop and it really is a wonderful inviting space with lots of treasures.

They even repair costume jewelry too! 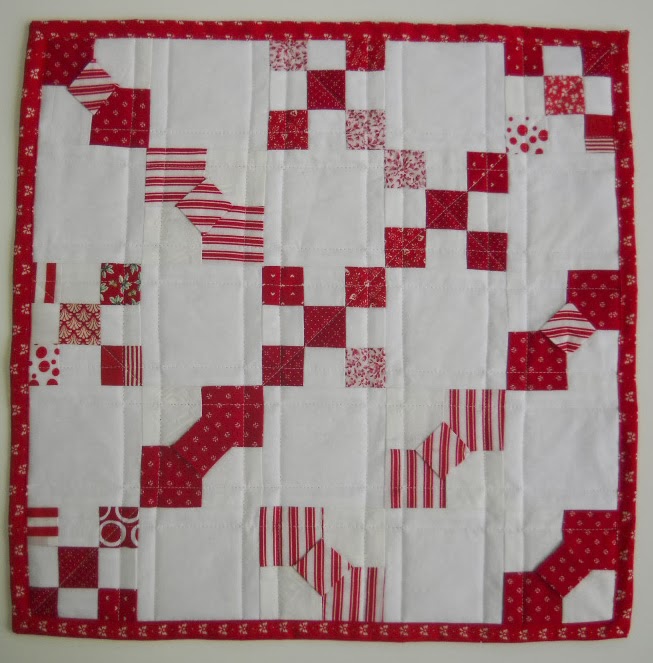 3-D Bow tie blocks are easy to make in any size. To make an 3" (finished) bow tie, you will need two 2" squares of your background fabric and three 2" squares of a print fabric for each block. 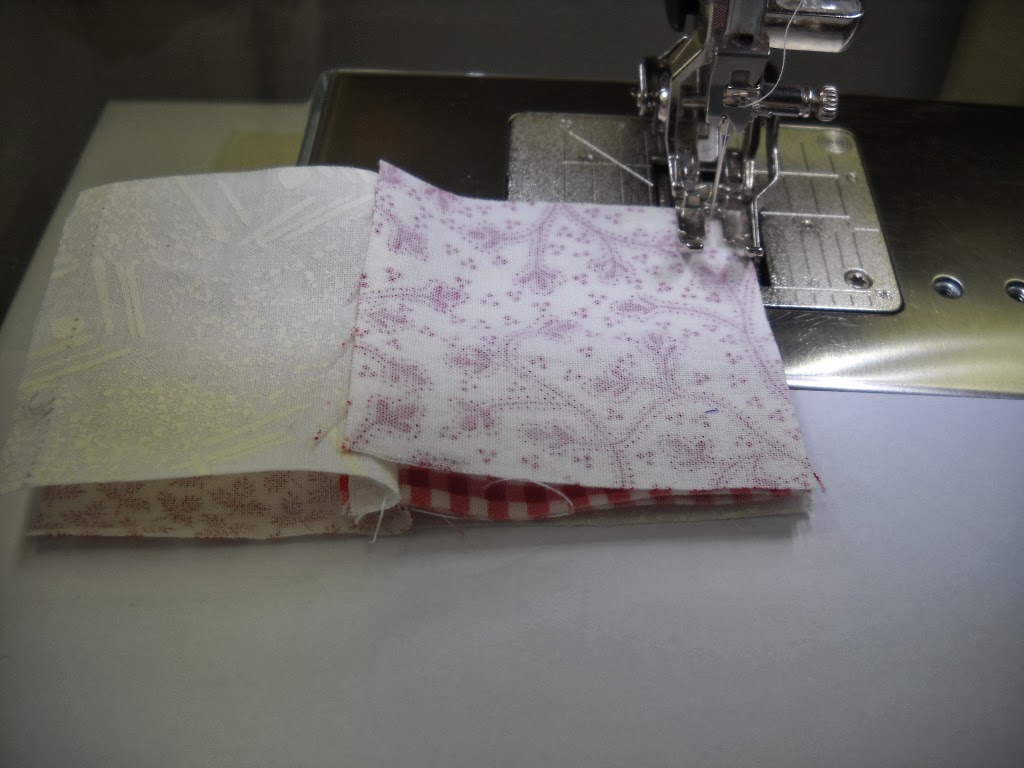 Open up, and pull out the folded tie piece. Sew that together the remaining background and tie squares. 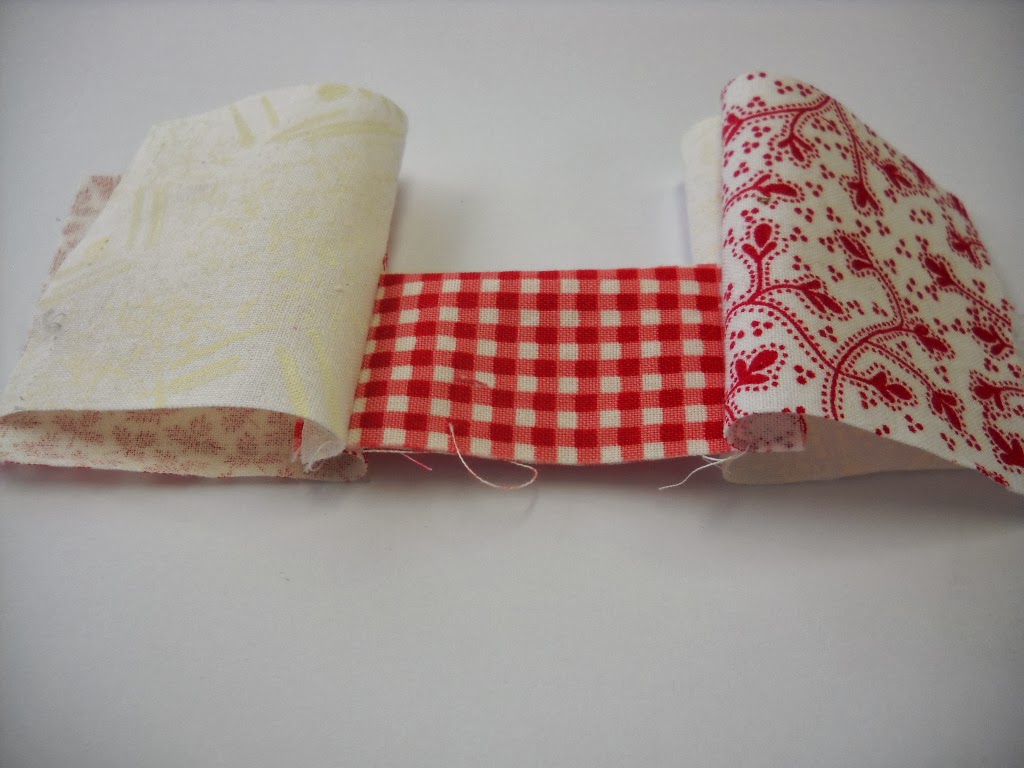 If the background is on the top of the first set, then it belongs on the bottom set this time. 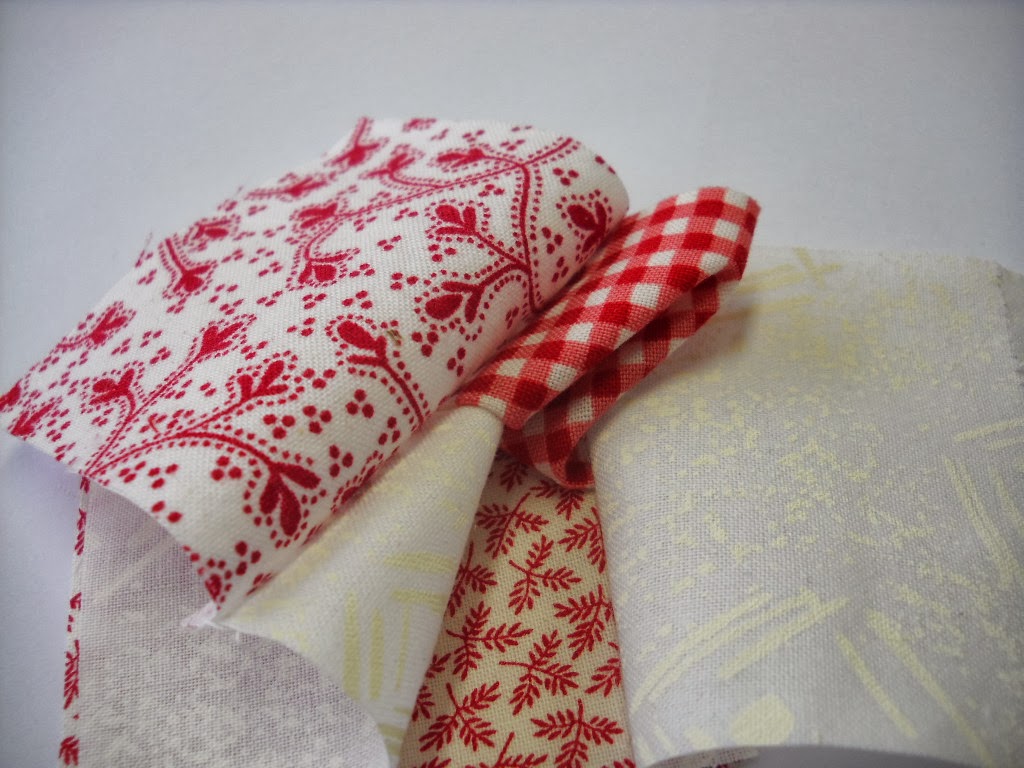 Open the knot piece and put both pieces right sides together, matching the center seam. Put seam allowances on opposing sides, one in each direction, so you won't have a huge lump on one side. Sew. 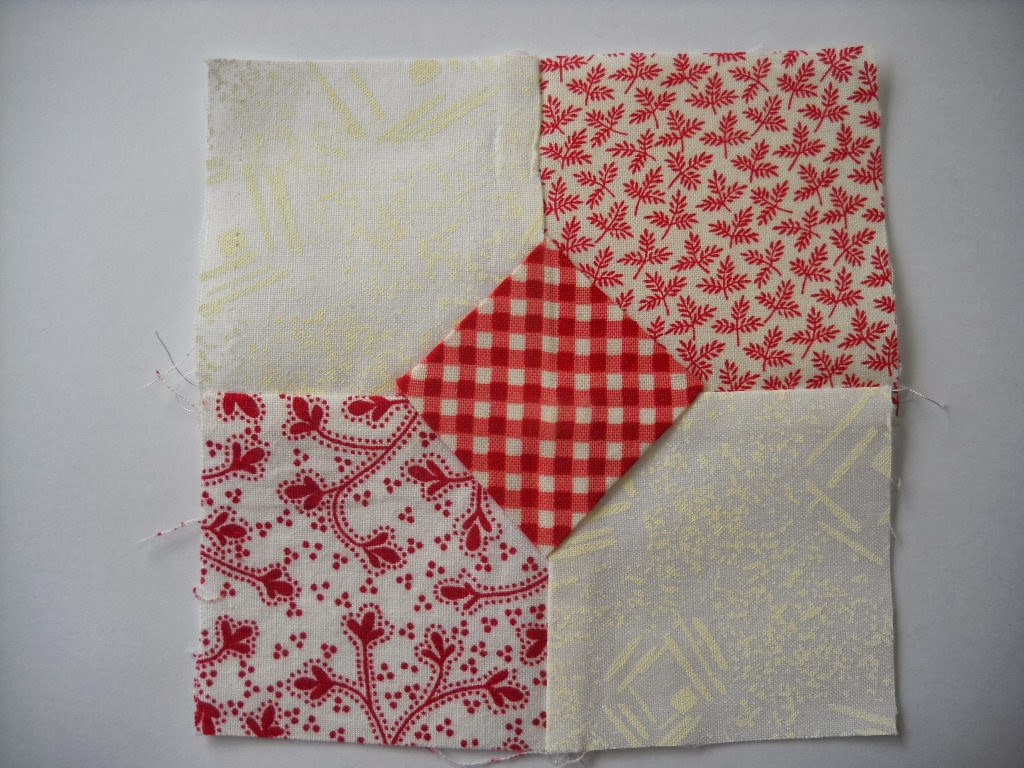 Want a different size? Cut all the squares one half the desired block size plus 1" for seam allowance. The process is the same.

Have Fun!!
Posted by Melody Crust at 6:00 AM No comments:

A Pretty Day in Seattle

Living in the Seattle in the winter means that every pretty day needs to be celebrated! (okay I admit it's an excuse to go out for dinner).
My husband's favorite place is Chinook's at Salmon Bay located in Seattle's Fishermen's Terminal.


Posted by Melody Crust at 5:30 AM No comments:

I have belonged to Evergreen Piecemakers Quilt Guild almost since it was formed 30 years ago on a hot summer’s day in an apple orchard in Kent, Washington. The “founding mothers” outgrew the original meeting place and chose the First Christian Church, 11717 SE 240th, Kent, WA 98031. Our meetings take place the 2nd and 4th Mondays at 7 p.m. Please join us.

This month's speaker was Sonia Grasvik. I've know Sonia for a long time, but never heard her speak. What a delight!

She says about this quilt: As a child in the Midwest, I was privileged to witness the beautiful display of the heavens unmarred by the light pollution we know today. Told that much of what I was seeing was no longer there, it was the beginning of a life long struggle to “see with my heart” and not with eyes only. 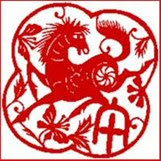 The source of Chinese New Year is itself centuries old and gains significance because of several myths and traditions. Traditionally, the festival was a time to honor deities as well as ancestors. Chinese New Year is celebrated in countries and territories with significant Chinese populations and is considered a major holiday.

Those Born in the Year of the Horse

The noblest of the signs, some might say, is that of the horse. Horses are popular, quick-witted, charming, cheerful, and talented. People born in the Year of the Horse are popular. They are cheerful, skilful with money, and perceptive, although they sometimes talk too much.They are wise, talented, good with their hands, and sometimes have a weakness for members of the opposite sex. They are impatient and hot-blooded about everything except their daily work. They like entertainment and large crowds. They are very independent and rarely listen to advice.

They are most compatible with Tigers, Dogs, and Sheep. 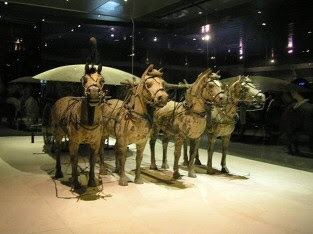