I'm really pleased with my offerings at Quilt Works this fall. 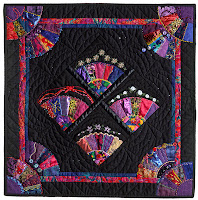 Beads are a Blast
10:30-1:30 Oct 27
Beads are a great addition to quilts and garments. Learn how to use beads to their best effect, what to look for when you shop, which tools are helpful, and how to place, sew and lock these little beauties onto the project you bring to class. We will also be making fancy fringes and dangles!.

Paint Stick Magic
2:00-5:00 Oct 27
Make elegant fabric with the look of airbrushing! Paint sticks applied to cotton or silk is fun, permanent and has an exceptionally short learning curve. Come play with paint sticks while learning the tricks the professionals use in this informative hands-on workshop for both quilt and clothing makers..

Thread is no longer a ‘Plain Jane’ necessity - it’s now available in many luscious colors and types. Steering your
way through the sea of threads out there can be a bit daunting. Experiment with your own machine while you learn how to match thread to the appropriate needle, make the tension setting your best friend and troubleshoot your way to fun and fancy sewing.

Is binding the quilt your least favorite part?  Bindings and piping are a snap with this no-fail completely machine-stitched method.  In this class you will be making a sample to take home to keep as a ‘how to’ example for your own quilts. Binding will never be the same again!
Posted by Melody Crust at 6:00 AM No comments:

Twelve world renowned quilters have each donated a 16" x 16" wall quilt for an online auction benefiting the Alzheimer's Art Quilt Initiative (AAQI). The auction will be held during November 1-10.

The Alzheimer's Art Quilt Initiative (www.alzquilts.org) is a national, grassroots organization whose mission is to raise awareness and fund research through art. It auctions and sells donated quilts through the Priority: Alzheimer's Quilt project and sponsors a touring exhibit of quilts about Alzheimer's called "Alzheimer's Illustrated: From Heartbreak to Hope." The Alzheimer's Art Quilt Initiative has raised more than $735,000 since January 2006. Ami Simms of Flint, Michigan is the founder and executive director of the AAQI, a 501(c)(3) nonprofit corporation operated entirely by volunteers. She is a quilter. Her mother had Alzheimer's.