Fashions on the Hangar

Somehow the dresses just aren't the same on the hangar. But they are still beautiful! 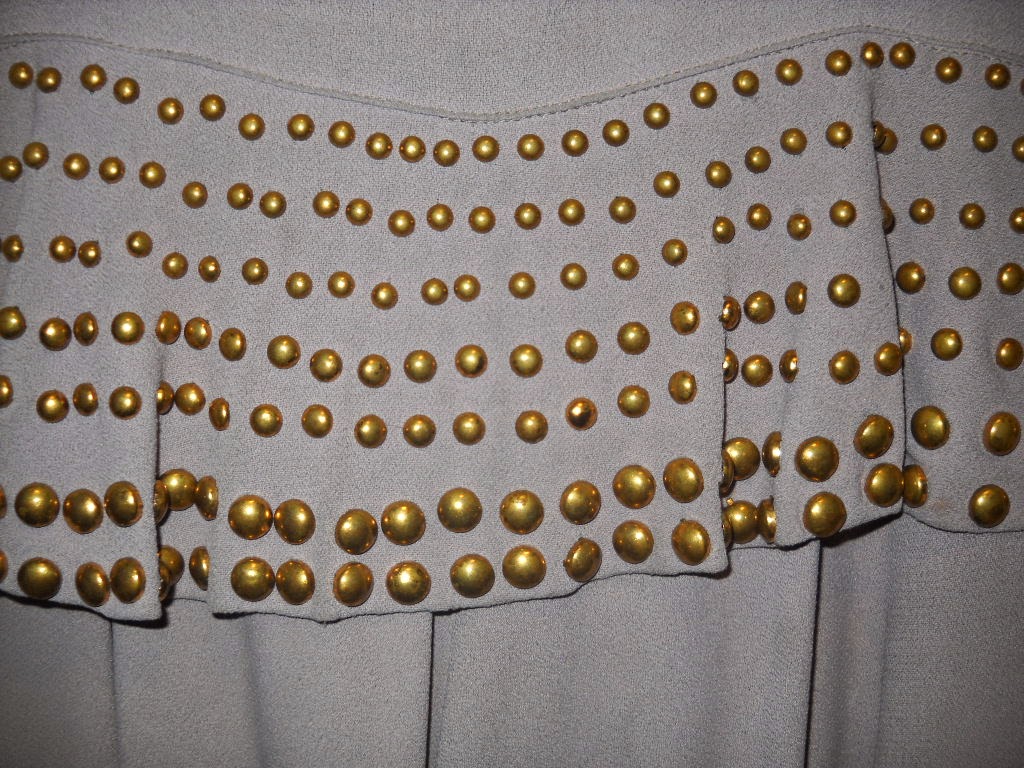 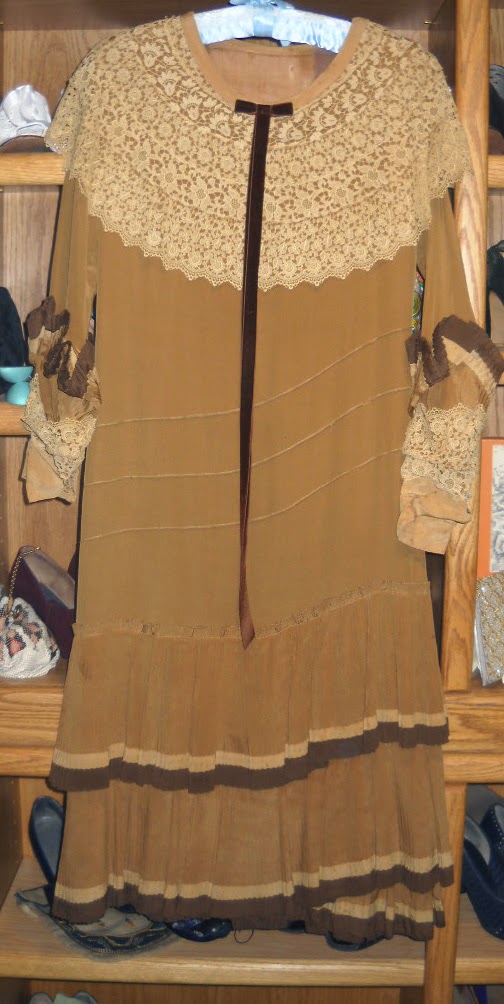 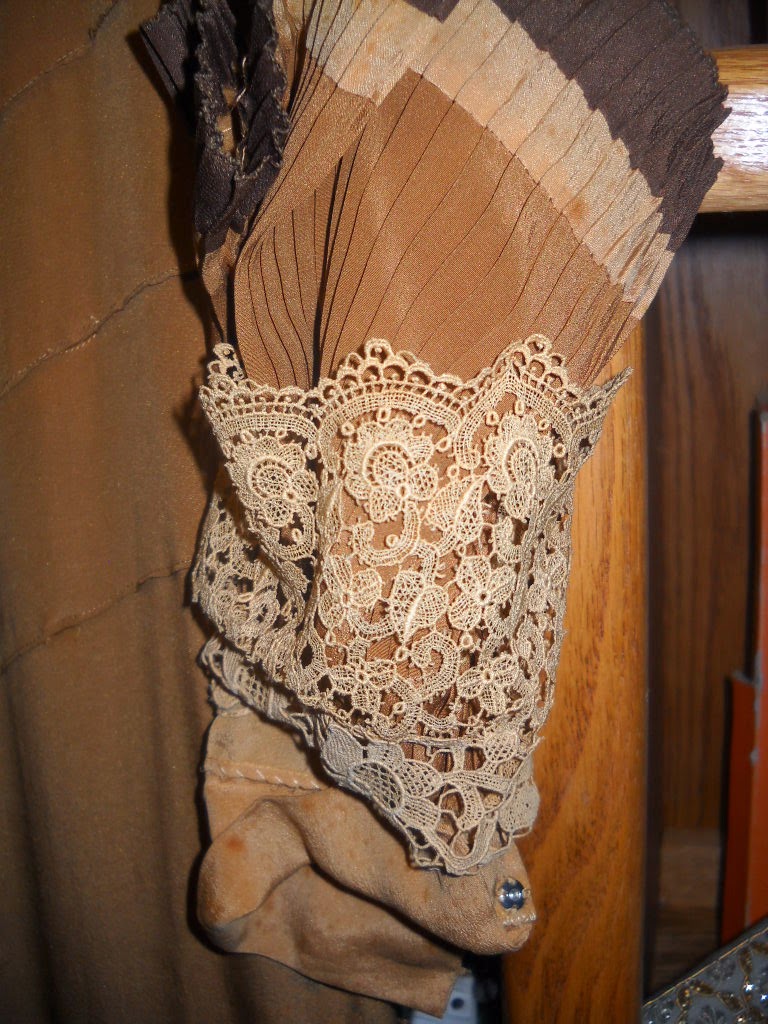 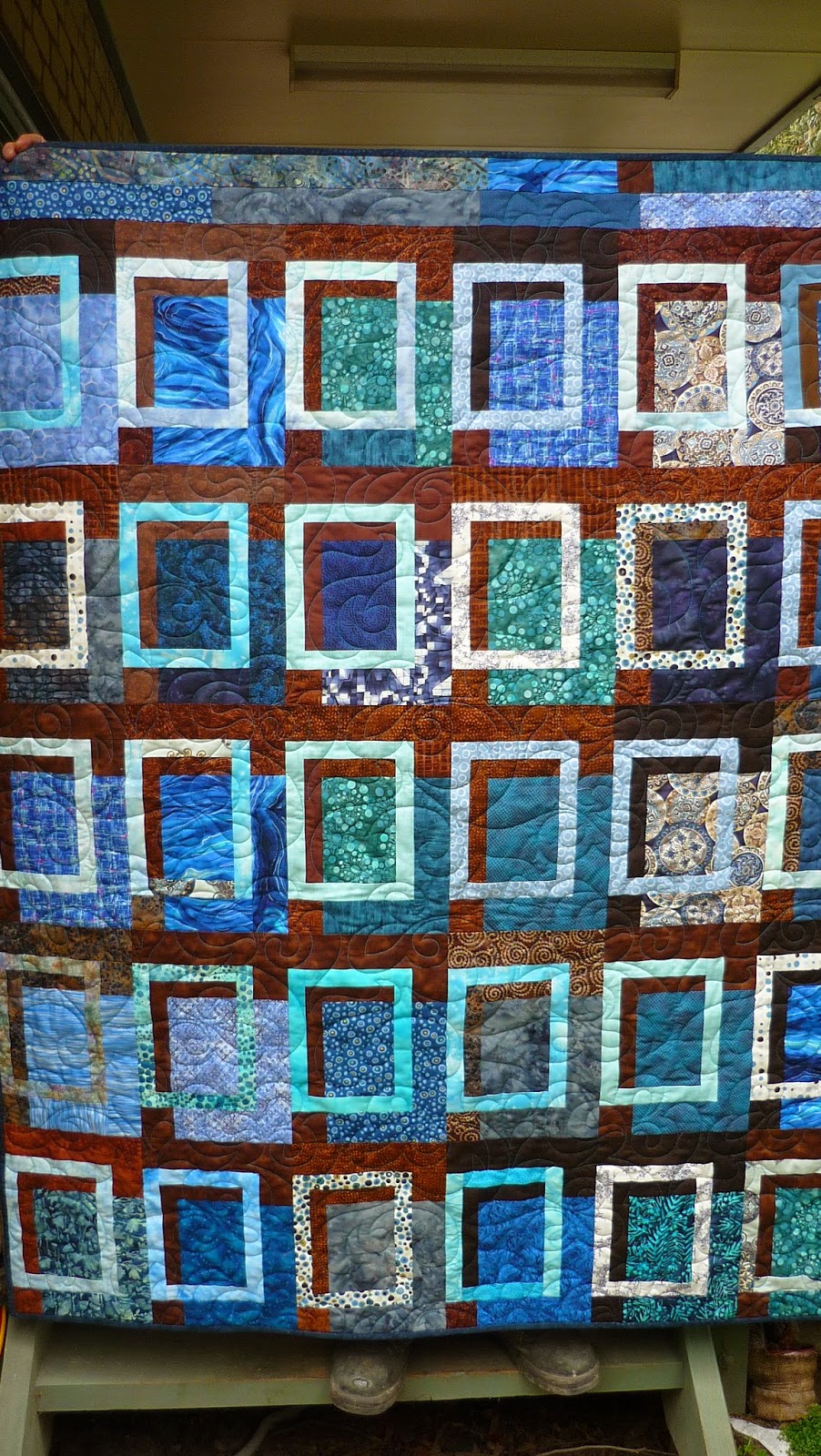 I have finally finished my attempt at your lovely quilt.I got so carried away that I had enough blocks for 2! The first is a quilt for our "Aussie Hero Quilt" program. This supplies quilt to Defence Service personnel serving in the Middle East. 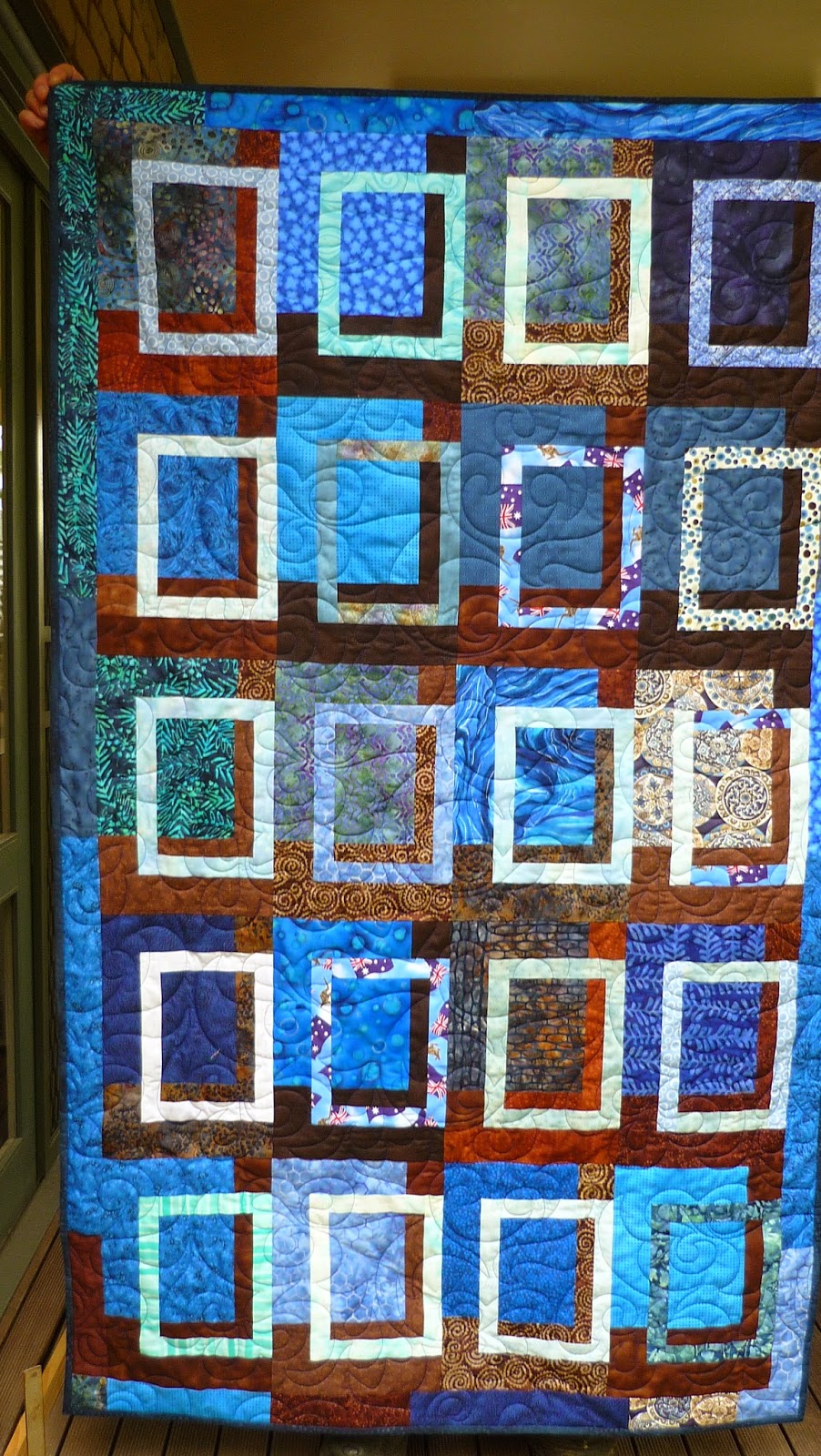 The second was made for a young fellow sharing an apartment with my son. Blue is his favourite colour and the back has the red for his footy team - Melbourne Demons. 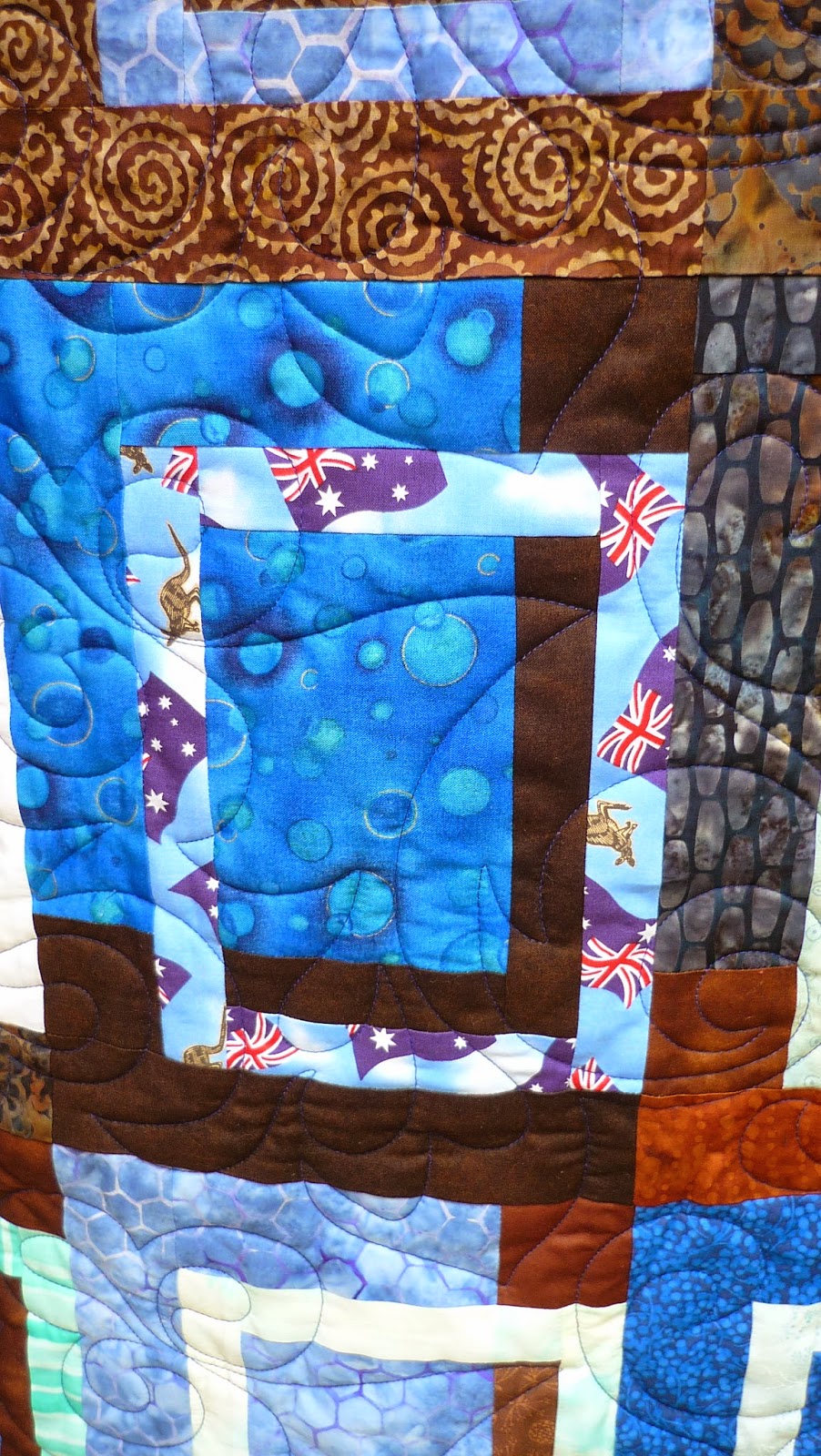 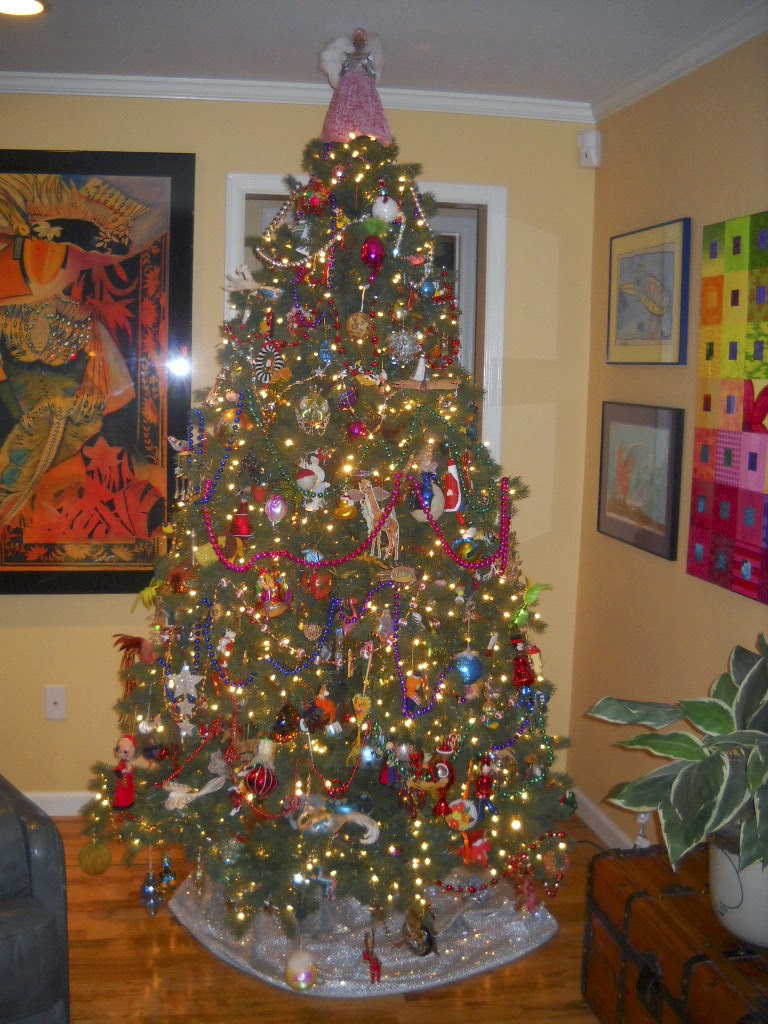 The tree was traditionally decorated with edibles such as apples, nuts, or other foods. In the 18th century, it began to be illuminated by candles which were ultimately replaced by Christmas lights after the advent of electrification. Today, there are a wide variety of traditional ornaments, such as garland, tinsel, and candy canes. An angel or star might be placed at the top of the tree to represent the angel Gabriel or the Star of Bethlehem from the Nativity.
Posted by Melody Crust at 6:00 AM No comments: 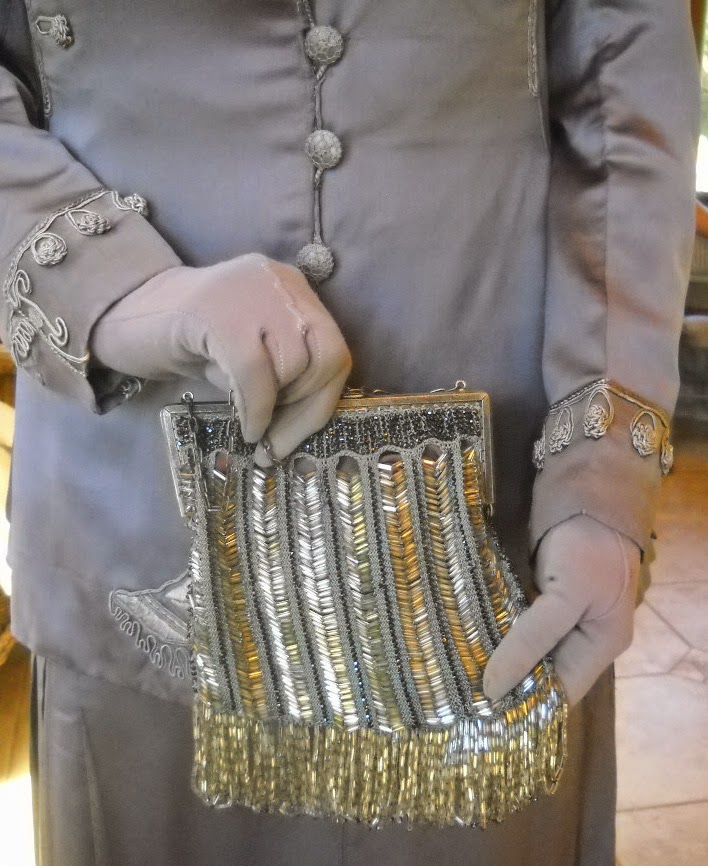 As far back as the Middle Ages, both men and women carried purses. Although these medieval bags infrequently held the rare commodity of money, they did serve to stash other small personal items such as important papers for men and sewing implements for ladies.

These early purses often reflected the social status of the carrier. More elaborately embroidered and embellished bags usually found a home with society's most affluent members.

Handbags dating prior to the 19th century rarely present themselves to collectors today. Some of the most popular bags with collectors these days are the beaded and metal mesh examples of the early 20th century.


Posted by Melody Crust at 5:00 AM No comments:

A Private Tour of This Elegant Old House 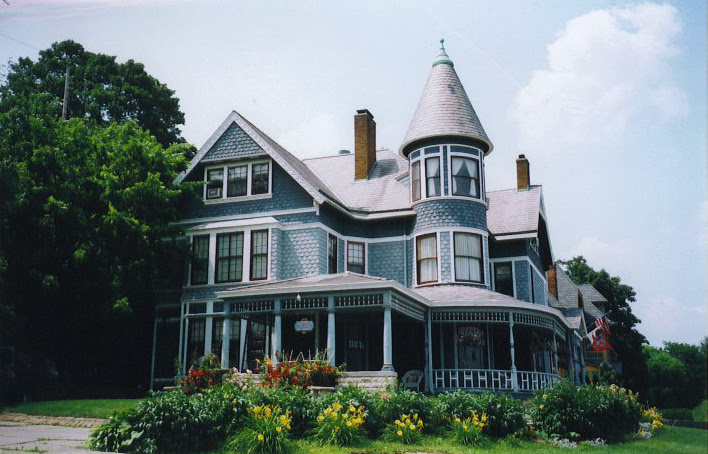 Victorian Elegance comes alive for you nestled in the bluffs of Historic Dubuque. The Hancock House, listed on the National Register of Historic Places, shows Queen Ann architecture at it's finest.Built in 1891 by Charles T. Hancock. The third son of John T. Hancock, Charles succeeded his father as head of the Midwest's largest wholesale grocer and distributor, the profitable JOHN T. HANCOCK & SONS.

Today it is a charming B & B run by Chuck and Susan.

The city of Dubuque is named after Julien Dubuque, a French Canadian fur trader who settled in the area in the 178O's. Dubuque originally came to the region to engage in trade with the Mesquakie Indians who occupied the land at that time. As Dubuque befriended the Mesquakie, his attention turned from fur trading to the abundant number of plentiful lead mines that were located on their property. In 1788, after amicable negotiations, the Mesquakie granted Dubuque control of the lead mines surrounding the Dubuque area.

Dubuque is a city located along the Mississippi River. With a population of 58,253, it the tenth-largest city in Iowa.

The city lies at the junction of three states: Iowa, Illinois, and Wisconsin, a region locally known as the Tri-State Area. It serves as the main commercial, industrial, educational, and cultural center for the area. Geographically, it is part of the Driftless Area, a portion of North America that escaped all three phases of the Wisconsinian Glaciation.

One of the few large cities in Iowa with hills, it is a major tourist destination, attracted to the city's unique architecture and river location. Also, it is home to five institutions of higher education, making it a center for culture and learning.

Debbie Cacciamani stitched all of these interesting samples. 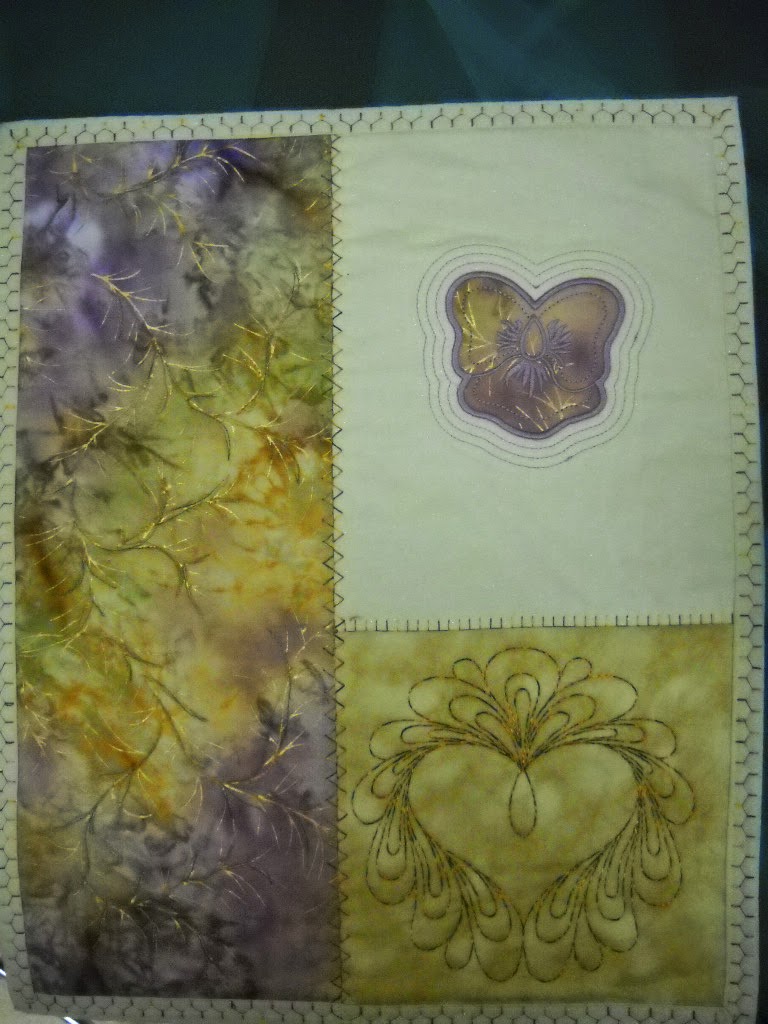 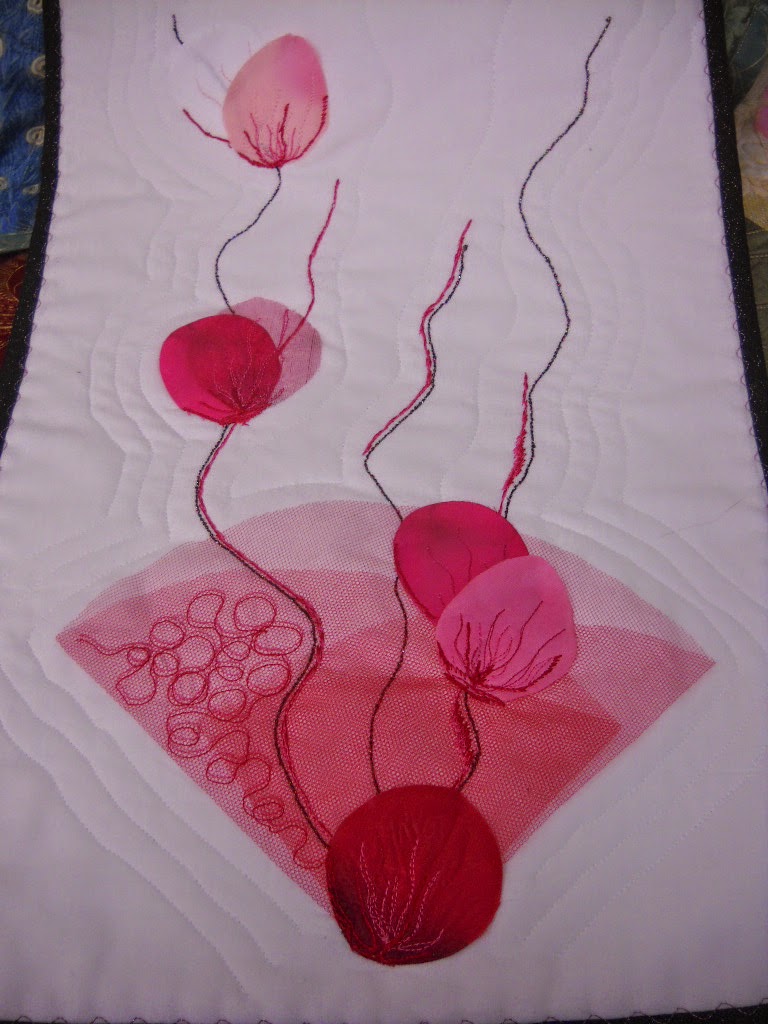 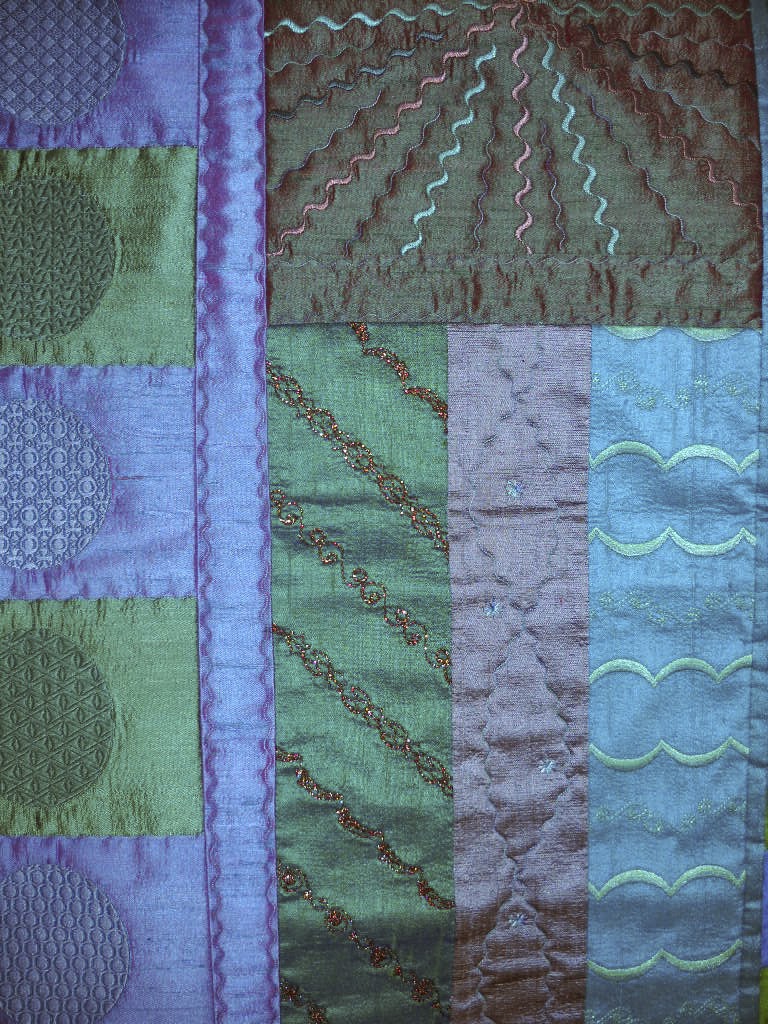 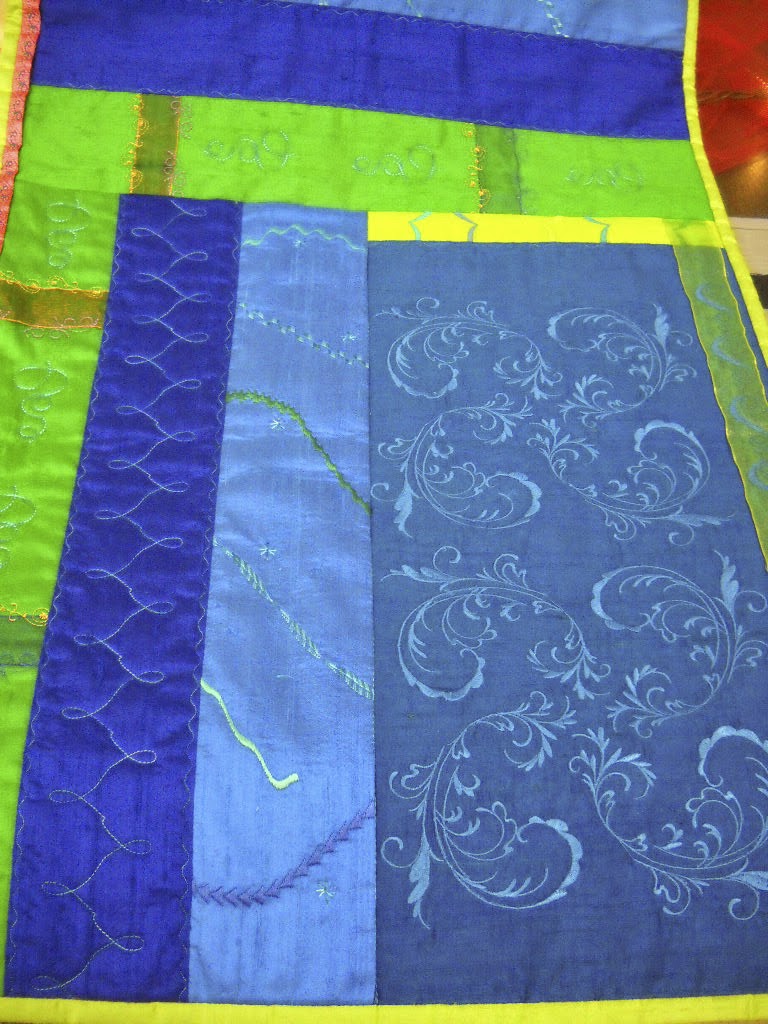 I love to see what other people are doing, but of course my very most favorite thing is to learn something new that I would like to sew.

As a BERNINA Ambassador, I was invited to Aurora Illinois and the home of BERNINA of America. What a treat! I learned all about the new 880 machines. (I sew on an 830).

Sewing, embroidering and quilting with the BERNINA 8 Series machines offers everything I need to create great projects.

BERNINA's longarm has some great features. I thought the most important thing about them is that they are designed by a company that started with home sewing machines, no industry machines. I found it very familiar to
use.

The BERNINA embroidery machine represents the latest in embroidery technology, delivering the highest quality stitching, ease of use and industrial durability. The machine is perfect to embroider hats, leather, jackets, polos, gloves, denim and other delicate items.

Look for quality – If you find a bargain piece of low quality jewelry that’s kitschy and fun, and you absolutely love it, go ahead and purchase it. But overall, buying vintage costume jewelry of quality makes sense. Quality pieces will hold their value and wear better over time. Look for signs of quality such as pronged settings, substantial weight, smooth plating and sparkling stones. 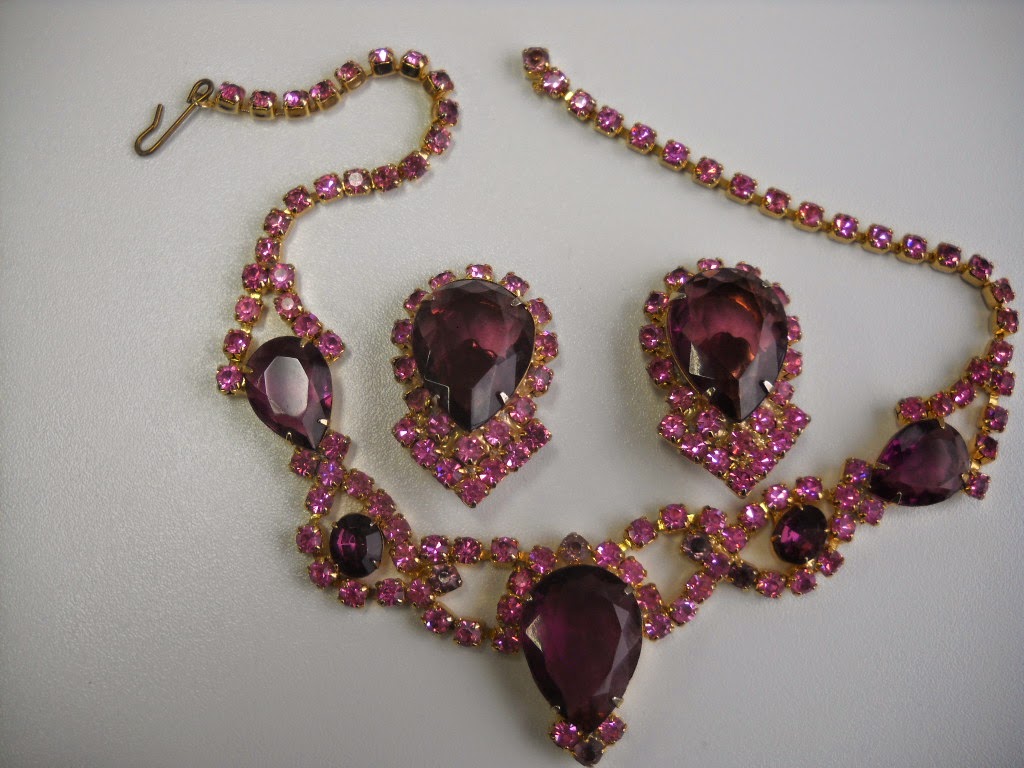 Certain manufacturers are known for creating jewelry of quality as well: Eisenberg, Schiaparelli, Miriam Haskell and Schreiner are a few names to look for when purchasing high-end pieces. More moderately priced signatures include Weiss and Kramer among many others. Should a vintage jewelry purchase always be "signed?" Not necessarily. There are even more beautiful unsigned pieces available on the secondary market, including those made by DeLizza; Elster known as "Juliana", and all the aforementioned companies made unsigned jewelry at one time or another. It really depends on who you're buying for, since an avid costume jewelry collector will appreciate a signature far more than someone who values the piece as a fashion accessory.


The most important tip, buy what you love!!
Posted by Melody Crust at 6:00 AM No comments:

I am a jewelry lover with a particular passion for vintage costume jewelry. My most recent purchase is a rather gaudy bracelet and earring set. I am very selective in my choices and prefer jewelry from the '40s, '50s and 60s. It can be found in like new condition at prices and is still affordable. Only looking for large, flashy pieces because that's what I love. If your are in the market here are some tips.

Condition – Try everything on! Make sure it fits. Bracelets can be small, some clasps are difficult. If I can't put it on, I don't buy it! Don’t take the condition of a vintage jewelry item for granted. Extremely worn plating, darkened or cloudy rhinestones, missing parts, clasps that don't work properly, missing stones, and chipped or scratched enamel all lower the value of a vintage piece. Obvious repairs such as sloppy soldering and haphazard stone replacements should also be avoided. That can mean close inspection is necessary to see some of these important details, so take care when examining online photos.

Fortunately, I live in the Seattle area so I have easy access to Rhinestone Rosie. Rosalie Bryzelak Sayyah, an Antique Road Show appraiser, she buys, and repairs vintage jewelry. The store is located at 606 West Crockett Street, Seattle, Washington 98119 - 206.283.4605 rosie@rhinestonerosie.com.

Flappers were a "new breed" of young Western women in the 1920s who wore short skirts, bobbed their hair, listened to jazz, and flaunted their disdain for what was then considered acceptable behavior. Flappers were seen as brash for wearing excessive makeup, drinking, treating sex in a casual manner, smoking, driving automobiles, and otherwise flouting social and sexual norms. Flappers had their origins in the liberal period of the Roaring Twenties, the social, political turbulence and increased transatlantic cultural exchange that followed the end of World War I, as well as the export of American jazz culture to Europe. 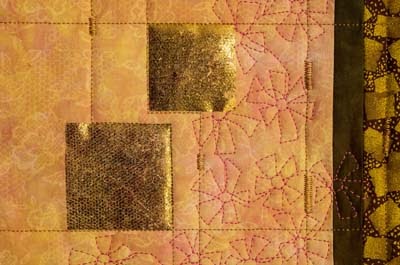 I love the quilting part of the process. But not all quilting has to be 'free' motion. The textural beauty of straight lines is not to be dismissed. The Wizard has lots of straight lines, all stitched with the walking foot. And I must confess that I slipped in just a few free motion flowers.
Posted by Melody Crust at 6:00 AM No comments:

I'm in a bit of a panic!  Christmas is coming way too fast. If you are feeling the pressure to finish things up, consider Straight Line Quilting.


I embroidered Santa in my spare time. When it came to the quilting, I kept it simple. Changing the size, style or orientation of grid lines emphases the center motif. Here, two different kinds of straight lines, evenly distributed, allow the piece to hang straight and square and set off Santa, the most important part of the design.