What makes an embroidery hoop good?

The purpose of an embroidery hoop is to hold the fabric drum tight. For most embroidery, I like my fabric to be drum tight, if I tap on it with my fingers, it sounds like a drum.

There are different ways to achieve drum-tight fabric for stitching: a slate frame, stretcher bar frames, or a hoop. I prefer a hoop for most of my embroidery.
Size of the Embroidery Hoop & Your Hands

The 6″ diameter ring is an easy fit for my hands. Anything larger becomes cumbersome when embroidering the middle of the design. You should be able to hold the edge of your hoop in your palm, secured by your thumb, and stretch your fingers easily to the center of the hoop.

As a general rule you should always take your fabric out of your hoop when you finish stitching. I must admit I can be a bit lazy, and don't always do this. So I usually use a hoop that I have wrapped the inner ring.Not only does this help keep the fabric from wrinkling, but I find it helps keep the fabric taught.

Posted by Melody Crust at 4:46 PM No comments:

The Joys of Hand Embroidery

I love to embroider. I think it might be because this is the first skill I every learned. After a lifetime of embroidery I have learned of few things along the way that make it much more enjoyable and successful too.

Not all needles are alike. Poor quality needles are a real problem. They break, pull when going
through the fabric, or even cut the threads they are carrying. John James needles are made of the highest quality iron alloys. Then each needle is nickel plated to reduce the possibility of rusting, and to provide a smoother surface when passing through the fabric. The result is a needle the user never notices, which is as it should be. 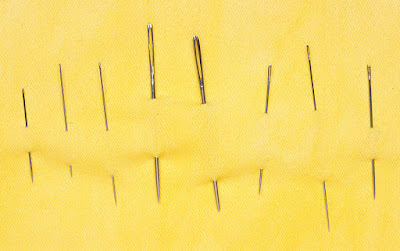 Needles are made by:
1.-A wire is drawn down from 5's gauge steel rod.
2.-Then straightened and cut to 2 needle lengths.
3.-Points are then formed on each end.
4.-The impression of 2 eyes is stamped into the wire. Holes are then punched through both impressions.
5.-The wire is broken into 2 separate needles.
6.-Waste metal from around the eye is removed-this is known as cheeking.
7.- The needles are then hardened.To prevent brittleness, they are subsequently tempered.
8.-The needles are scoured - this removes burrs from inside the eyes and polishes them.
9.-The needles are finally nickel plated, inspected, and packaged.

Needles come in a large variety of types and sizes.

There is a bewildering array of needles from which to choose. Type and size classify hand-sewing needles, with each designed for a specific use. One size definitely does not fit all! Be sure to choose the type of needle according to the job it will perform and the size according to the thread it will hold. Keep in mind that for these hand sewing needles, the higher the number, the smaller the needle (the opposite of machine needles).

·       Betweens or Quilting needles: Very short, round-eyed needles used to make fine, short, sturdy stitches. Because these needles are thick, they can better withstand the stress of stitching through the multiple layers of a quilt. I suggest starting with an 8 or 9 and gradually progressing to an 11 or 12 as you become more proficient and your stitches become more even.

·       Sharps: All-purpose, medium length needles with small round eyes commonly used for applique and general sewing. These are an excellent choice for fine embroidery and hand sewing because they are easy to thread and slide through fabric with a minimum of effort.

·       Straw and Milliner needles: Long and slender with small rounded eyes. Many quilters like them for applique because their flexibility aids in maneuvering the fabric. Their thinness also makes them a good option for embroidering French knots.

·       Chenille needles: Short, thick needles with long, oval eyes and sharp points. The longer eye allows multiple strands of embroidery floss, pearl cotton, or silk ribbon to be easily threaded. The oversized needle makes a larger hole in the fabric and helps prevent you from unintentionally crushing silk ribbon or large thread by forcing it through a too-small hole.

·       Tapestry needles: Short and thick with a large eye and blunt point. The long oval eye carries silk ribbon and other bulky threads easily. These needles are often used for wrapped stitches (where the first line of stitching is laid down as usual and a second thread is wrapped around it, staying on the surface of the fabric) because the dull point doesn’t pierce the original thread.

·       Beading needles: Extremely long and fine with a small round eye. Generally they are used for beading due to their flexibility. This very long, very flexible needle is hard to control when stitching through fabric so it’s usually used for stringing beads, not for applying them to fabric.

·       Easy Threading needles: Relatively large needles used when threading needles is a problem. Machine quilters who tie knots will find these needles handy when burying thread tails after the knot is tied.

Thread and hand sewing needleS AND THEIR uses 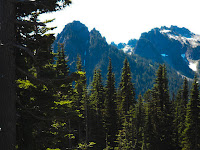 I feel like I have been absent for a time. I am sorry, but it's summer in Seattle and it's GORGEOUS!

The sun has been shining almost every day, and while it has been hot, I love it!

On average, it is cloudy here 226 days a year, which means most of the time there's NO SUN. There are a number of reasons that explain why summer in Seattle is so special. 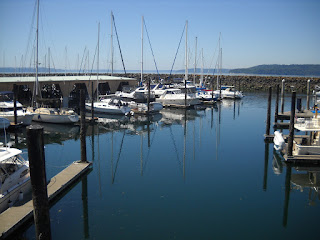 We appreciate it more than anyone else.

It doesn’t rain, no seriously, Seattle is drier than Phoenix in July.

There is water everywhere: Between Lake Washington, Green Lake, Lake Union, Portage Bay, Elliot Bay, Salmon Bar, The Ship Canal, The Montlake Cut and, all the other ones I can't remember right now, you can get wet in all of them.

Best of all, Seattle's summer lasts longer than anywhere else. Thanks to our “Indian” summers, they last, October.


Posted by Melody Crust at 3:30 AM No comments: