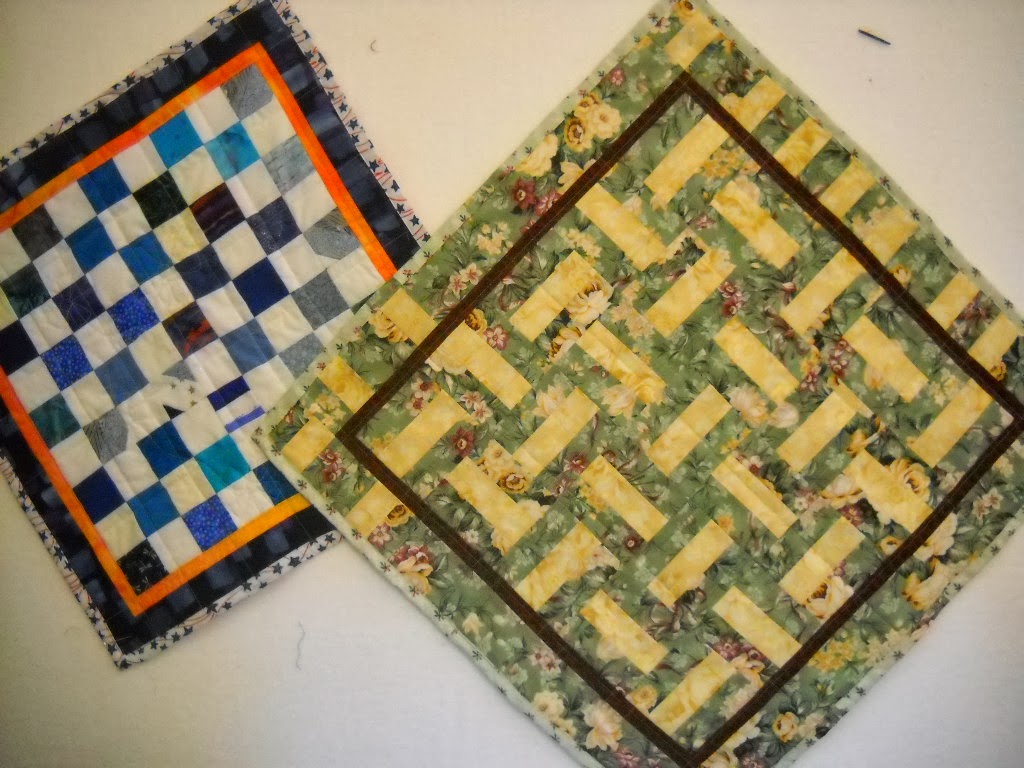 On a four day retreat you'd think I'd finish lots of stuff, but I'm here to tell you not so. I think, the laughing, eating got in the way of the sewing!

I did manage to start and finish a couple of small quilts for kids in crisis.


And add a few rows to this red, white and blue one. 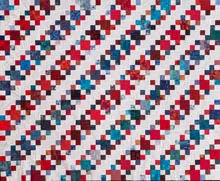 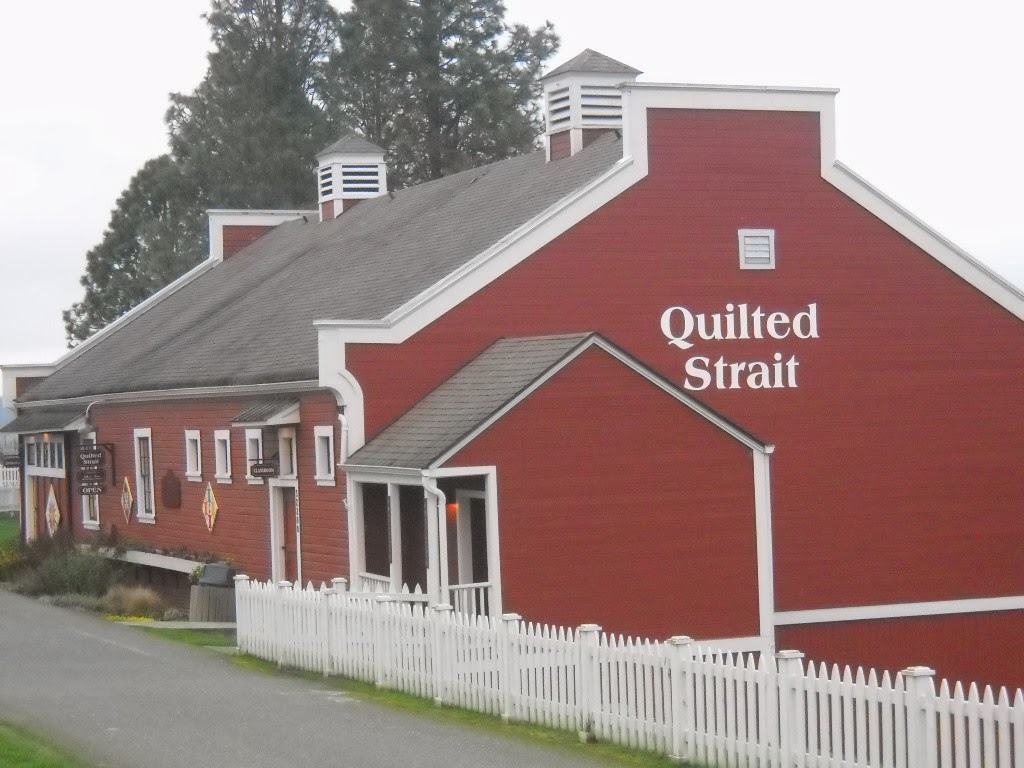 Spent part of my retreat time taking a class at Quilted Straight, the wonderful quilt shop just down the road in Port Gamble.
"Ink Workshop -The Crayon Thing".
This three hour class offers students a chance to experiment Crayola Crayons and Tsukeniko Inks on fabric. Learn techniques for applying each medium to create a soft “color book like” look as well as some basics on shading and establishing a light source. Discuss the pros, cons, and potential of both products. A kit including handouts, patterns, and fabric as well as use of crayons, inks, applicators, and markers will be provided.
You still have time to take it from instructor, Barb Schultz from Enchanted Valley Arts
Sunday, February 23, 1 pm to 4 pm
PS (Don't forget, I'll be there in April leading a couple of fast finishing classes). 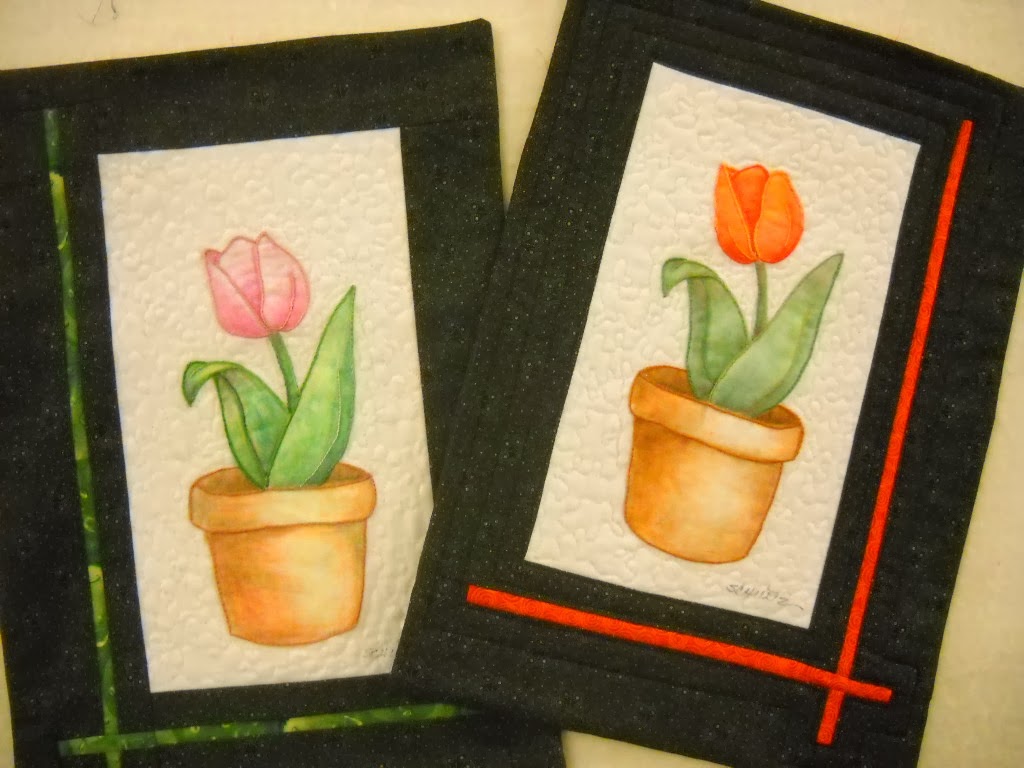 I spend a week every winter on a retreat. My definition of retreat is to sew with friends, no projects, no plan, just sew, eat, sew, visit and sew some more.

This is what the space looked like at the beginning and end, I forgot to take a picture in the middle, guess I was just too busy. 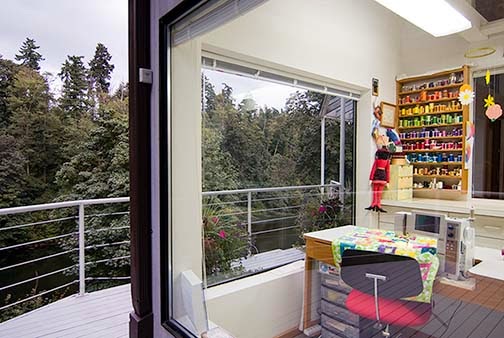 We have Bald Eagle's in Western Washington. We have mating pair living on our little lake for a few years.   I can't believe I can sit in my studio and watch eagles out my window.  I know there is a nest up the lake, but despite it's size, I can't find it. Eagle's are found near large bodies of open water with an abundant food supply and old-growth trees for nesting. The Bald Eagle is an opportunistic feeder which subsists mainly on fish, which it swoops down and snatches from the water with its talons. It builds the largest nest of any North American bird and the largest tree nests ever recorded for any animal species, up to 13 ft deep, 8.2 ft wide, and 1 ton in weight.

Bald Eagles are not actually bald; the name derives from an older meaning of "white headed". The adult is mainly brown with a white head and tail. The sexes are identical in plumage, but females are larger than males. The beak is large and hooked. The plumage of the immature is brown.
Posted by Melody Crust at 4:00 AM No comments:

Something new for the year. 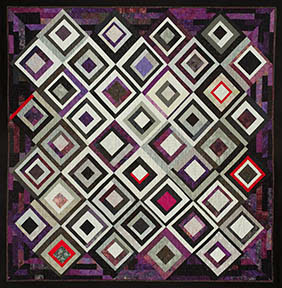 Labels: All About Adam

It's sunny in Seattle

On a sunny winter day, what's better that a trip to Chinatown for lunch

and then a quick trip to a quilt shop? Nothing I can think of! 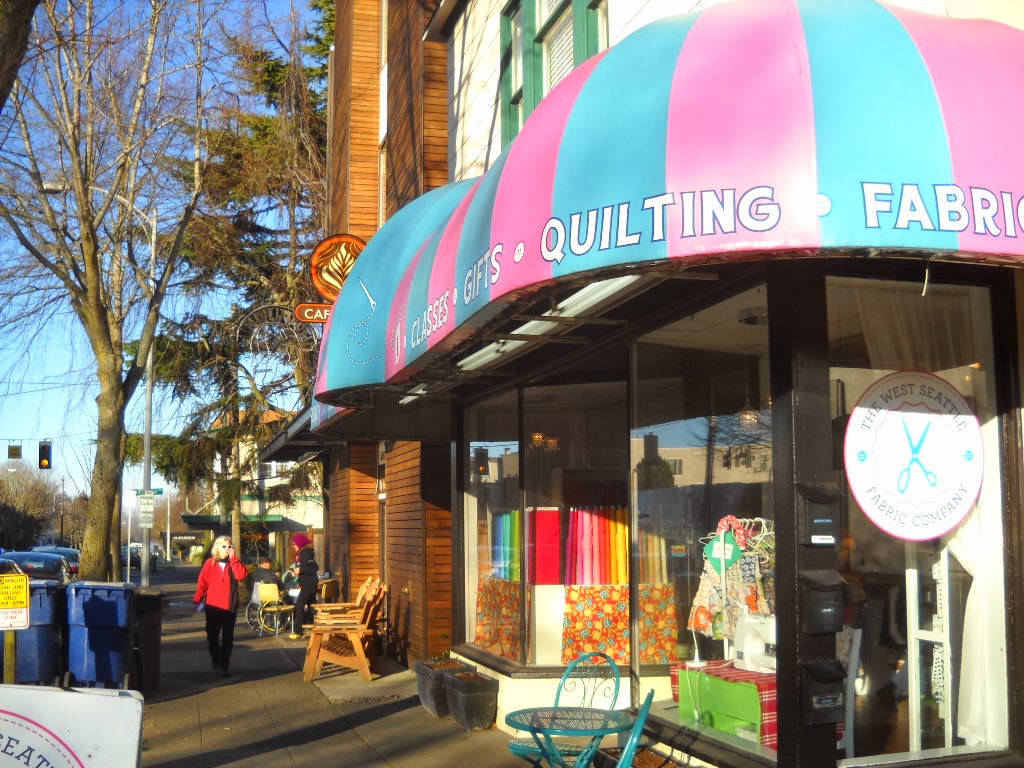 Sign up Now!
I'm pleased to announce that on Sunday, April 13rd I,  will be teaching two fun and informative classes on how to finish your quilting projects easily and quickly, sharing loads of professional tips and secrets.

Karen Kay Buckley's new Perfect Curved Scissors.  What is the benefit of the curved tip you might ask?  The benefit is that it allows you to clip close to your fabric without cutting into your quilt top.  These scissors are fabulous for clipping threads for machine quilting, machine applique and machine embroidery.  They have a serrated blade, a very comfortable handle, and a right or left hander can use them with ease. 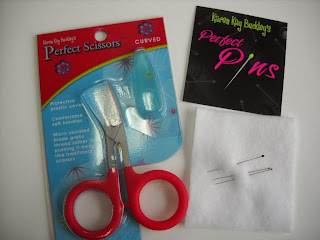 Perfect Pins
I have never before worked with a pin that is this thin.  It is very, very skinny and very sharp.  You can see the size in the photograph.  Because the head on these pins is so small I find that I like to spill the pins onto a piece of felt, making it easier to pick them up. There are 50 pins in each little plastic tube.
Posted by Melody Crust at 6:00 AM No comments:

The Power is Out 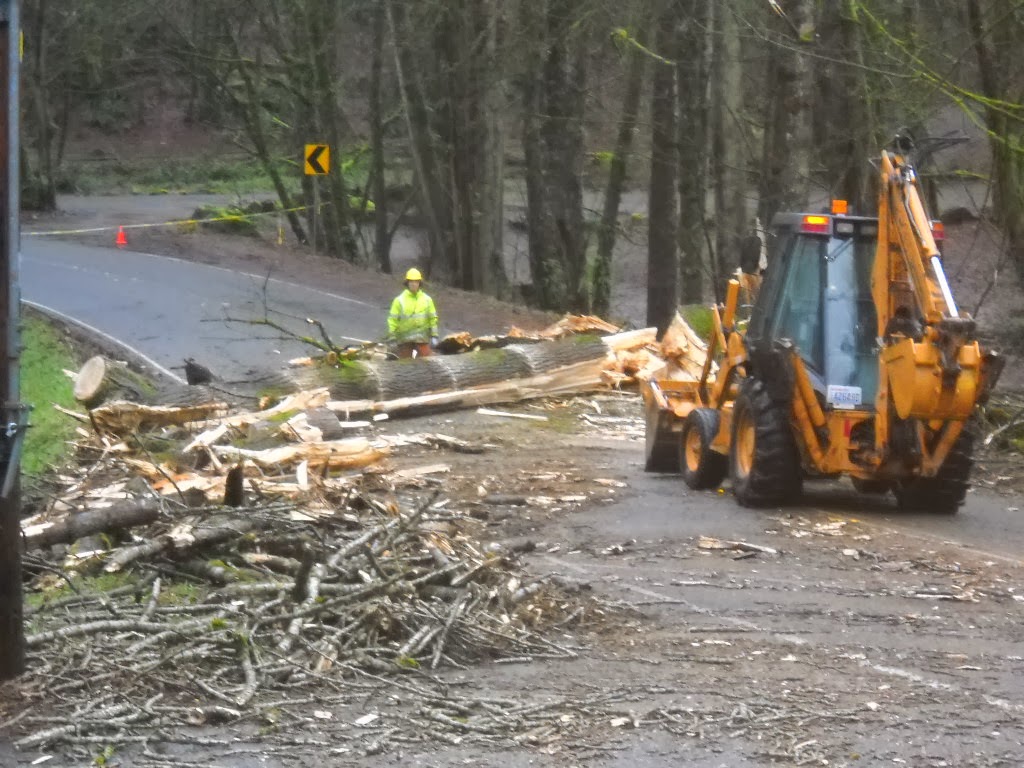 The newspaper says "High winds knocked out power Saturday to tens of thousands of electricity customers in Western Washington, and crews worked to get them back on line for residents hoping to watch the Seattle Seahawks playoff game against the New Orleans Saints."

I am not a football person, my husband listened to the game on the radio. For me it meant that there was no sewing machine, computer or lights. Fortunately the temperature was in the low forties, so the fire kept us warm.
I took the day off to read! Glorious!
Posted by Melody Crust at 10:50 AM No comments:

Getting Organized in the New Year

The new year usually brings a bout of getting more organized so I can sew more efficiently. This year I am focusing on my sewing table.The right side just doesn't have enough room, I'm always knocking things in to the trash can that sits right next to the table. On a trip to Ikea I bought a small wooden shelf which my husband attached to the end of the table.
I liked that shelf so much, I went back to Ikea and bought another one to add to the end of the fabric cabinet. I also bought the metal baskets. I bought four, I wonder what I did with the other two? Handy little things, I think I'll look for them!

New colors of thread are always interesting. While I know I don't have the most fabric, I'm getting close to having the most thread. The last thing in the world I need is more thread. But when I saw the luscious  Isacord embroidery thread available in multicolor spools, I knew I just had to buy some. Now all I need is the perfect project to use them. Guess I better get sewing! 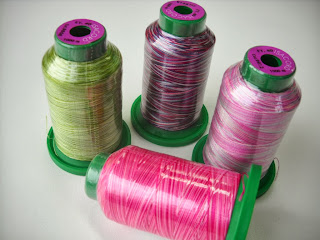 Pantone color of the year for 2014: Radiant Orchid

Emerald green is so 2013. Say hello to Radiant Orchid, Pantone's color of the year for 2014. In 2013 Emerald, served as a symbol of growth, renewal and prosperity, Radiant Orchid reaches across the color wheel to intrigue the eye and spark the imagination.

Classes at QuiltWorks Northwest and Beads & Beyond

Stitching Through the Layers
Melody Crust
All Skill Levels
NO Sewing Machine necessary
1:00-4:00 Feb 2
Based on her book, Stitching Through the Layers, The Art and Elegance of Straight Line Quilting, by local artist Melody Crust.
Register here for Stitching Through the Layers
re with Melody:
Joining the Blocks: Quilt As You Go Style
10:30-1:30 Feb 1
Learn to join pre-quilted blocks using several innovative techniques. Go home ready to make larger machine quilted quilts without all the work of trying to get it into your machine. The Quilt-As-You-Go method allows for more detailed quilting using a standard sewing machine since you're only quilting a small section at a time.
Super Fast Binding and Piping
2:00-5:00 Feb 1
Is binding the quilt your least favorite part? Tired of humdrum finishes? Come and learn piping and binding techniques to make your quilts stand out in a crowd. In class you will be making samples of finishing methods to take home and use on your own quilts. Bindings will never be boring again!

It's New Year's! Time to clink champagne glasses, let the confetti shower down and maybe even share a kiss when the clock strikes midnight.  Have you written your new year's resolutions yet? I have, sew more and agonize less!