A Look Back in Time 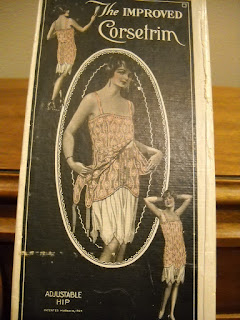 The corset has been an important article of clothing for several centuries, evolving as fashion trends have changed. Women, as well as some men, have used it to change the appearance of their bodies.

The corset first became popular in sixteenth-century Europe, reaching the zenith of its popularity in the Victorian era.  corsets.

When the waistline returned to its natural position during the 1830s, the corset reappeared and served the dual purpose of supporting the breasts and narrowing the waist. However, it had changed its shape to the hourglass silhouette that is even now considered typical both for corsets and for Victorian fashion. At the same time, the term corset was first used for this garment in English. In the 1830s, the artificially inflated shoulders and skirts made the intervening waist look narrow, even with the corset laced only moderately. 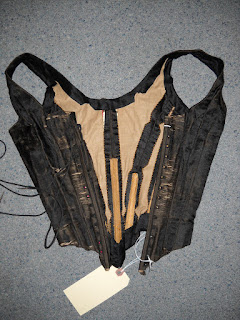 In 1839, a Frenchman by the name of Jean Werly made a patent for women's corsets made on the loom. This type of corset was popular until 1890 when machine-made corsets gained popularity. Before this, all corsets were handmade - and, typically, home-made,

Believe me when I say that we should be more than a little grateful the we are here now! Just looking at the size of them, much less the boning was an odd feeling.

But, the workmanship nothing short of inspiring!

There were lots of corsets (my photo's just did not do them justice), other inner garments, but the boxes, besides being beautiful, told a story all by themselves. Just look at the different body shapes shown on there boxes from the 1880's and 1924.