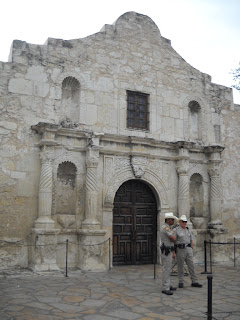 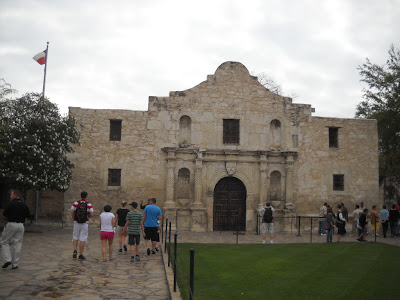 Originally named Mission San Antonio de Valero, the Alamo served as home to missionaries and their Indian converts for nearly seventy years. More than 2.5 million people a year visit the 4.2 acre complex known worldwide as "The Alamo." Most come to see the old mission where a small band of Texans held out for thirteen days against the Centralist army of General Antonio López de Santa Anna. Although the Alamo fell in the early morning hours of March 6, 1836, the death of the Alamo Defenders has come to symbolize courage and sacrifice for the cause of Liberty.  The Alamo has been managed by the Daughters of the Republic of Texas since 1905. Located on Alamo Plaza in downtown San Antonio, Texas, the Alamo represents nearly 300 years of history. Three buildings - the Shrine, Long Barrack Museum and Gift Museum - house exhibits on the Texas Revolution and Texas History.
Mission Nuestra Señora de la Purisima Concepción de Acuña This handsome stone church was dedicated in 1755, and appears very much as it did over two centuries ago. It stands proudly as the oldest un-restored stone church in America. In its heyday, colorful geometric designs covered its surface, but the patterns have long since faded or been worn away.

Known as the "Queen of the Missions", this is the largest of the missions and was almost fully restored to its original design in the 1930s by the WPA (Works Projects Administration). Spanish missions were not churches, but communities, with the church the focus. Mission San José shows the visitor how all the missions might have looked over 250 years ago.
Posted by Melody Crust at 6:00 AM