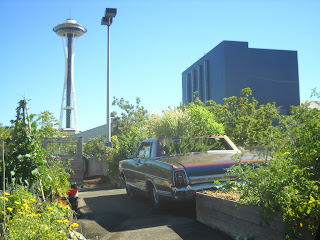 I've lived in the Seattle area most of my life. I'm always surprised at what's here. Now, I don't garden, and I'm not planning to any time soon, but I do love them! We were recently at the Seattle Center and here it was!

A P-Patch right on the roof of the parking garage!! So I Googled P-Patch and here is what I found: 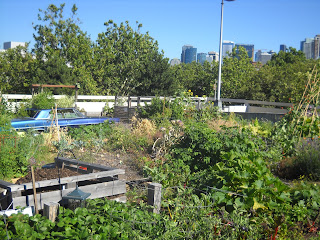 The P-Patch Community Gardening Program, a program of the City of Seattle Department of Neighborhoods, oversees 88 P-Patches distributed throughout the city. Community gardeners grow food on 14.9 acres of the land and in addition steward 18.8 acres for the public for a total of 32 acres. 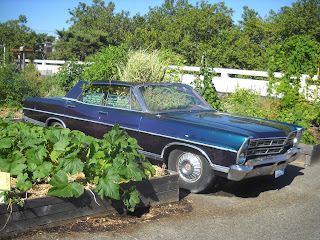 What's the "P" in P-Patch?
Definitely a favorite P-Patch question. The history of the P-Patch Community Gardening Program goes back to 1973. The 'P' commemorates the family who used to farm the area that became the first community garden in Seattle, the Picardo Farm P-Patch. This P-Patch was acquired from the Picardo family who ran a truck farm in the earlier part of the 1900s up in the Wedgwood neighborhood. Their farm originally included the current P-Patch area, University Prep and Dahl Playfield. When the city started up the P-Patch program in 1973, the 'P' was taken to commemorate the family.