My Favorite - The Beds

Two of the largest and perhaps most arresting objects in the Getty Museum’s Decorative Arts collection are 18th-century beds, and each serves as example of the time period in which they were made. 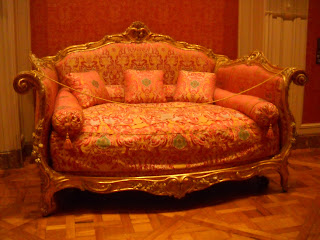 This bed is called a lit à la Turque (Turkish bed). This title does not refer to any specific Turkish design source but reflects the 18th-century preoccupation with anything exotic and unusual from foreign countries. This unusually large bed was made for a bedroom in a grand private residence. It would have been placed sideways against a wall, with a draped baldachin (ornamental canopy) now missing. The wheels underneath the bed allowed servants to pull out the body of the bed easily, leaving the tall back attached to the wall while they made the bed. It was probably set into an alcove or niche in a bedroom wall. 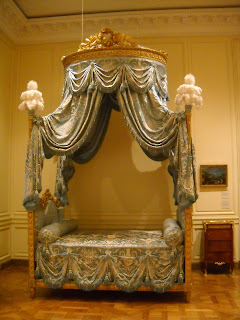 The lit à la Polonaise (Polish bed) would have also belonged in a deep niche in the bedroom of the main apartment of a palace or mansion. In the 1700s, visitors were frequently received in the bedroom, while the host or hostess was still in bed or at his or her dressing table.