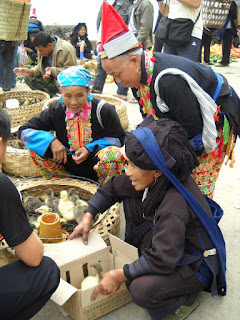 The term "Miao" gained official status in 1949 as a (ethnic group) encompassing a group of linguistically-related ethnic minorities in Southwest China. This was part of a larger effort to identify and classify minority groups to clarify their role in the national government, including establishing autonomous administrative divisions and allocating the seats for representatives in provincial and national government.

Historically, the term "Miao" had been applied inconsistently to a variety of non-Han peoples. Early Western writers used Chinese-based names in various transcriptions: Miao, Miao-tse, Miao-tsze, Meau, Meo, mo, miao-tseu etc. In Southeast Asian contexts words derived from the Chinese "Miao" took on a sense which was perceived as derogatory by the Hmong subgroup living in that region. In China, however, the term has no such context and is used by the Miao people themselves, of every group.

The later prominence of Hmong people in the West has led to a situation where the entire Miao linguistic/cultural family is sometimes referred to as Hmong in English language sources. Following the recent increased interaction of Hmong in the West with Miao in China it is reported that some upwardly aspiring non-Hmong Miao have even begun to identify themselves as Hmong. However, most non-Hmong Miao in China are unfamiliar with the term as referring to their entire group and continue to use "Miao", or their own separate ethnic self-designations.

Though the Miao themselves use various self-designations, the Chinese traditionally classify them according to the most characteristic colour of the women's clothes.
Posted by Melody Crust at 4:30 AM