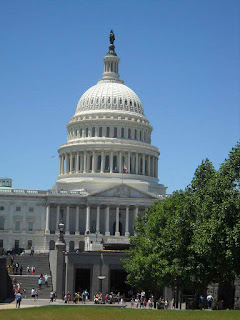 Construction of the U.S. Capitol began in 1793. In November 1800, the U.S. Congress met in the first completed portion, the north wing. In the 1850s, major extensions to the North and South ends of the Capitol were authorized because of the great westward expansion of our nation and the resultant growth of Congress. Since that time, the U.S. Capitol and its stately dome have become international symbols of our representative democracy.
Posted by Melody Crust at 3:30 AM