Two great old churches. No idea what this one is, but WOW! 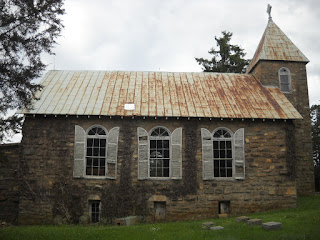 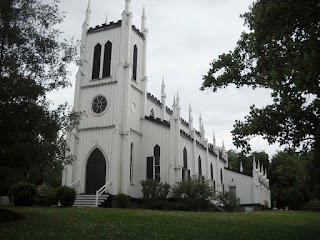 architecture. A forest of spires sprouts from the nave, transepts, and vestry of the board-and-batten structure. All of the details are formed from milled boards reduced by sawing to the desired shapes and nailed together. The country church was named in honor of James Waddell, a local blind preacher and key player in the battle for religious tolerance during Colonial times. J. B. Danforth, an amateur architect who also was chief clerk at Richmond's Mutual Assurance Society, designed the church. A tracing of Danforth's drawings by the Richmond carpenter-architect John Gibson, who presumably worked on the building, is in the possession of the church. The design called for a steeple that was deleted from the finished work. The church is romantically sited on a hill overlooking the Rapidan River and broad stretches of countryside.

And a quilt shop. They moved into this building built in 1850 as the Madison Presbyterian Church.

I have lived in VA Bch for 30 years and never knew about these churches. I must put this on my bucket list. Love your quilting.