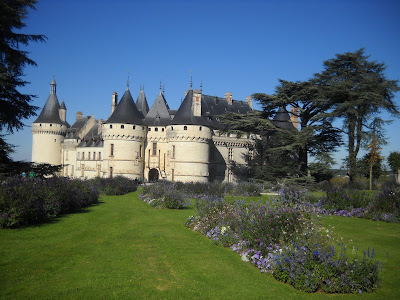 This castle was very different than the last. Just as grand and beautiful but less busy.

The Château de Chaumont was founded in the 10th century by Odo I, Count of Blois. The purpose was to protect his lands from attacks from his feudal rivals, Fulk Nerra, Count of Anjou. On his behalf the Norman Gelduin received it, improved it and held it as his own. His great-niece Denise de Fougère, having married Sulpice d'Amboise, passed the château into the Amboise family for five centuries.

Pierre d'Amboise unsuccessfully rebelled against King Louis XI and his property was confiscated, and the castle was dismantled on royal order in 1465. It was later rebuilt by Charles I d'Amboise from 1465–1475 and then finished by his son, Charles II d'Amboise de Chaumont from 1498–1510, with help from his uncle, Cardinal Georges d'Amboise; some Renaissance features were to be seen in buildings that retained their overall medieval appearance. The château was acquired by Catherine de Medici in 1550. There she entertained numerous astrologers, among them Nostradamus. When her husband, Henry II, died in 1559 she forced his mistress, Diane de Poitiers, to exchange Château de Chaumont for Château de Chenonceau which Henry had given to de Poitiers. Diane de Poitiers only lived at Chaumont for a short while.

Later Chaumont has changed hands several times. Paul de Beauvilliers bought the château in 1699, modernized some of its interiors and decorated it with sufficient grandeur to house the duc d'Anjou on his way to become king of Spain in 1700. Monsieur Bertin demolished the north wing to open the house towards the river view in the modern fashion.

In 1750, Jacques-Donatien Le Ray purchased the castle as a country home where he established a glassmaking and pottery factory. He was considered the French "Father of the American Revolution" because he loved America. However, in 1789, the new French Revolutionary Government seized Le Ray's assets, including his beloved Château de Chaumont.

The castle has been classified as a Monument historique since 1840 by the French Ministry of Culture. The Château de Chaumont is currently a museum and every year hosts a Garden Festival from April to October where contemporary garden designers display their work in an English-style garden.